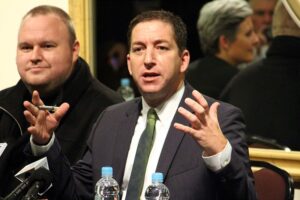 Greenwald, founder of The Intercept, has not merely “criticized Israel and its political leadership” – he has also repeatedly engaged in age-old antisemitic charges against American Jewry. For instance, he leveled the dual loyalty charge against American Jews, smearing them as “Israel-firsters.”
He has written:

“Meanwhile, one of the many Israel-Firsters in the U.S. Congress — Rep. Anthony Weiner, last seen lambasting President Obama for daring to publicly mention a difference between the U.S. and Israel — today not only defended Israel’s attack (obviously) but also, revealingly, pronounced:  ”Even if we are the only country on earth that sees the facts here, the United States should stand up for Israel.”  In other words:  who cares how isolated it makes us or what harm we suffer?”

American Jewish groups were again his target when he wrote:

It is simply true that there are large and extremely influential Jewish donor groups which are agitating for a U.S. war against Iran, and that is the case because those groups are devoted to promoting Israel’s interests…

Included in the International Holocaust Remembrance Alliance’s working definition of antisemitism is: “Accusing Jewish citizens of being more loyal to Israel, or to the alleged priorities of Jews worldwide, than to the interests of their own nations.”
Greenwald has also peddled the antisemitic canard that Jews control the government. Examples follow:
“So absolute has the Israel-centric stranglehold on American policy been that the US Government has made it illegal to broadcast Hezbollah television stations…” (Salon)

“Not even our Constitution’s First Amendment has been a match for the endless exploitation of American policy, law and resources [by the Israel lobby] to target and punish Israel’s enemies.” (Salon)

Making mendacious, dehumanizing, demonizing, or stereotypical allegations about Jews as such or the power of Jews as collective — such as, especially but not exclusively, the myth about a world Jewish conspiracy or ofJews controlling the media, economy,government or other societal institutions.

In response to communication from CAMERA, JTA added the following bolded text:

Greenwald, The Intercept founder, has relentlessly criticized Israel and its political leadership, and at times has invoked tropes of dual loyalty in attacking the pro-Israel community.