We wanted to tell a lot of stories because – it’s important because, you know, these voices are not normally heard, and we wanted to kind of show modern-time Palestine what’s happening with, you know, whether it’s an older guy that open a restaurant in Nazareth, quite kind of political about everything and anything, or a young guy that have tourist homes, one in Acre and one in Haifa, not interested at all in, you know, even defining what he’s – he is. 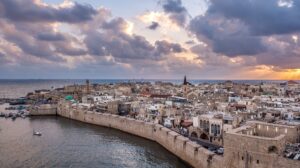 The Old City of Acre (Photo by Alexander Bobrov/Pexels)

Host Michel Martin immediately continued on to the next topic, failing to clarify for listeners that the cities Tamimi mischaracterized as Palestinian are in Israel, not within Palestinian-controlled territories, and not in the West Bank. ndeed, Nazareth, Haifa and Acre, all lie within Israel’s pre-1967 armistice line (the Green Line).

A stated “Guiding Principle” at NPR is that content “must attain the highest quality and strengthen our credibility. We take pride in our craft. Our journalism is as accurate, fair and complete as possible.”

“All the food and hospitality that a recipe book celebrates must be served in the case of Palestine against a very sobering backdrop. We want this backdrop to be properly painted. Things cannot be changed until they are fully seen,” opined Martin in the broadcast.

But a “properly painted” backdrop would not misrepresent Israeli cities as located within “Palestine.” “Journalism is a daily process of painting an ever truer picture of the world,” read the NPR standards of journalism. That starts with broadcasting a correction about the region’s basic geography, key information that should be at least as important as the flavor of musakhan, the crispy chicken that chef Tamimi believes should be the Palestinian national dish.

Stay tuned for an update.