In response to communication from CAMERA, Forbes yesterday removed the erroneous references to "Palestine" and "Palestinian territories," deleted Rachael Cousins' tweet, and prominently published a correction. See below for a detailed update.

Citing the notorious Twitter Corbynista Rachel Cousins, who has has a history of peddling antisemitic conspiracies and in tweeting fake news about Israel, Forbes has removed the northern city of Haifa from Israel, reassigning it to "Palestine." Lisette Voytko's June 7 article, "British Protesters Throw Slave Trader Statue into River -- And Other Stunning Global Protest Moments," states:

"Palestinian territories" is hyperlinked to a video of a demonstration tweeted by "Rachel_Swindon" which is also embedded in the article itself. The heading on the video, which is also reproduced on the Forbes site, is "Meanwhile in Palestine." In addition, the tweet carries the following text, which also appears in the Forbes article:  "The people of Palestine know what oppression looks like. A wonderful act of solidarity for #BlackLivesMatter." 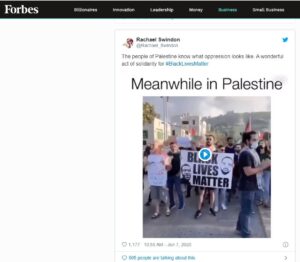 But that protest took place in Haifa, not in "Palestine." The famous Bahai gardens are visible in the background. An Israeli flag flutters on the left-hand side of the screen at the beginning of the clip. In the Palestinian territories, an Israeli flag is visible only when it is on the ground being trampled upon or being burned in a demonstration.
In addition, a photograph of the exact same scene from the June 2 Haifa, Israel demonstration was published by Nur Photos, and is available here.
Though CAMERA notified Forbes of the error yesterday, editors have yet to correct as of this writing.
Also troubling is that a leading business journal like Forbes would rely on and cite Rachael Cousins who has used her "Rachael_Swindon" Twitter account to promote antisemitic conspiracies and false anti-Israel allegations. In its 2019 report ("Engine of Hate: The online networks behind the Labour Party's antisemitism crisis"), the Community Security Trust cited Cousins as a case study exemplifying antisemitism in Jeremy Corbyn's Labour party. CST detailed:

@Rachael_Swindon is a Twitter account with vast influence in pro-Corbyn Labour circles, named by Buzzfeed as “one of the most popular, prolific, and polarising figures on political Twitter”. She revealed her real name in a September 2018 article to be Rachael Cousins, a 42-year-old living in Swindon with her husband Jon. She tweets about 40 times a day to more than 71,000 followers. [CAMERA adds: Now she has over 81,000 followers.]
Co 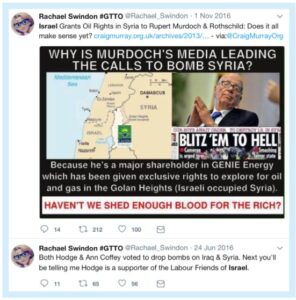 usins joined the Labour Party in August 2016 to support Corbyn. The account was accused of antisemitism in November 2016 after tweeting conspiracy theories about the Rothschilds, a common antisemitic trope. The account eventually apologised for this in February 2019. @Rachael_Swindon has also used the £1m trope popularised by Al-Jazeera and Electronic Intifada. When the Jewish News tweeted about the fact Labour Friends of Israel did not have a stall at the 2018 Labour Party conference, she commented: “Don’t get much for a million quid these days.”
The @Rachael_Swindon handle was created shortly after Cousins’ husband Jon’s account was banned. He had tweeted problematic material that played into themes of Jews, money and political influence, such as this image (right) showing a giant hand marked with an Israeli flag slotting a coin into the Houses of Parliament which is held in another hand that bears a Star of David. The @Rachael_Swindon account was banned from Twitter in March 2019 to outcry from supporters who began a hashtag in her name, #FreeTheSwindon1. However, she was soon reinstated and is back to tweeting as much as ever.

Among Cousins' anti-Israel falsehoods is a tweet of a video which she said showed "cowardly Israeli soldiers" roughing up Palestinian youths. In fact, the soldiers were Guatemalan and the youths were also Guatemalan.

Given Forbes' failure to correct thus far the blatant geographical error, CAMERA has reached out to Forbes Israel in the hopes that the Israeli branch can confirm for its American colleagues that Haifa is, in fact, in Israel. Stay tuned for an update.

In response to communication from CAMERA, editors deleted Rachael Cousins' tweet, which had falsely claimed the Haifa protest was in "Palestine," and also removed the reference to the Palestinian territories. Furthermore, editors posted the following correction prominently at the top of the article:

Correction (June 23, 2020): This post originally included a tweet with an unverified claim that it showed a protest in the Palestinian territories. We have deleted the tweet and video.

We commend Forbes for taking these steps to set the record straight and to remove its citation of an activist with a troubling record of antisemitism. 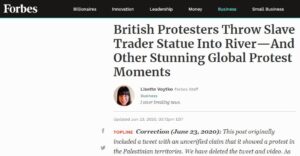