The Associated Press has failed to either substantiate or retract the highly dubious claim that Palestinian laborers from the Jordan Valley village of Fasayil earn just $3 an hour working at nearby Israeli settlements. In his June 19 article, “Palestinians fear displacement from an annexed Jordan Valley,” Joseph Krauss wrote:

Today, nearly ever man in the Palestinian village works for Jewish settlers in the sprawling modern farms in to the north and south.

The grazing lands to the west and east, leading down to the banks of the biblical Jordan River, have been swallowed up by the settlements or fenced off by the Israeli military. So instead of leading sheep out to pasture, the men rise before dawn to work in the settlements for around $3 an hour – or they move away.

Israeli employers in West Bank settlements are legally required to pay their Palestinian employees the same minimum wages applied in Israel for Israeli employees (28.46 NIS per hour, or $8.30, according to today’s exchange rate, for those who work 186 hours per month). The daily minimum wage for an employee who works five days a week is 212 NIS, or $61.74.

A review of data Palestinian Central Bureau of Statistics reveals that Israeli employers of Palestinians working in Israel and the West Bank have been respecting the law, paying Palestinians on average well above minimum wage. According to PCBS, in the first quarter of 2020:

The average daily wage for the wage employees in Israel and Israeli settlements increased between the 4th quarter 2019 and the 1st quarter 2020 from 255 NIS to 265 NIS respectively.

Palestinians working in Israel and the settlements work an average of 41.1 hours per week (page 26 of the PCBS report), and so their hourly rate on average is 32.25 NIS, or $9.40 — more than triple the figure cited in Krauss’ article.

In addition, David Elhayani, chairman of the Yesha Council and chairman of the Jordan Valley Regional Council, reported to CAMERA that Israeli employers in the area all follow the law, paying their Palestinian employees minimum wages or higher. Therefore, CAMERA yesterday contacted AP, requesting either substantiation or retract the claim that the men from Fasayil earn just $3 an hour, when official PCBS data shows a very different story. There was no response by the time of publication today.

(It’s possible AP’s information is nearly a decade old. A 2011 report from the Ma’an Development Center maintained that Palestinian laborers in Jordan Valley settlements earned on average 10 NIS an hour. That report was subsequently cited by a 2012 Oxfam report, which was then was footnoted in a 2013 Kav LaOved document.) 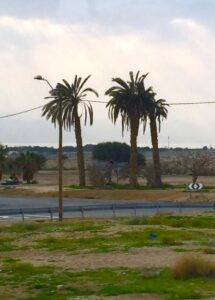 Palm trees in the Jordan Valley (Photo by Andrea Levin)

In addition, the article misleadingly claims that Jordan Valley “Palestinians are barred from those areas [ie closed military areas and 50 agricultural settlements], and even on the lands they own, they are forbidden from digging wells or building any kind of infrastructure without hard-to-get military permits.”

As CAMERA’s Gilead Ini has pointed out in a detailed review of a similar claim, everyone – Israelis and Palestinians alike – are barred from entering closed military areas. Some 46 percent of the Jordan Valley is an IDF firing zone, closed to all civilians, including Israelis. As for “barred” from settlements, certainly Palestinians do work in the settlements.

Further, the article implies that it is not possible to dig wells in the area, and any that are dug are immediately sealed:

Anything without a permit, from home extensions to tents, animal pens and irrigation networks, is at risk of demolition by the Israeli military.

“If you dig a well they will come the next day and fill it with concrete,” said Hani Saida, a farmer from the town of al-Auja…”

The article then details the reported difficulties of obtaining permits.

Meanwhile, PCBS statistics show that in the same region where Saida lives, wells – with or without permits –were nevertheless plentiful enough to have provided 14.5 million cubic meters of water in 2018 in the Jericho and Al-Aghwar governorate.