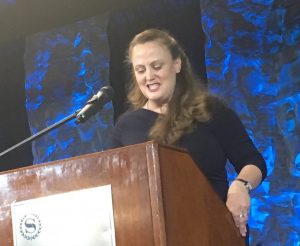 Mae Elise Cannon speaks at a Christ at the Checkpoint Conference in 2018. (Photo: Dexter Van Zile)

Mae Elise Cannon, the executive director of Churches for Middle East Peace, has recently written a book titled Beyond Hashtag Activism: Comprehensive Justice in a Complicated Age. The book is published by InterVarsity Press, which describes itself as “the book publishing division of InterVarsity Christian Fellowship/USA, a movement of students and faculty active on campus at hundreds of universities, colleges and schools of nursing in the United States of America.”

The text also obscures the supersessionist hostility of Naim Ateek, one of the founding fathers of Palestinian Christian Liberation Theology (PCLT).

Cannon’s effort to obscure Ateek’s replacement theology is found on page 229, where she instructs her readers about concerns people have raised about PCLT.

To establish her bona fides on the threat of replacement theology, Cannon cites The Misunderstood Jew: The Church and the Scandal of the Jewish Jesus (Harper San Francisco, 2006) by scholar Amy-Jill Levine.

In her book, Levine expresses concerns about the writings of Rev. Dr. Naim Ateek, an Anglican Priest in Jerusalem who has, on repeated occasions, used anti-Judaic passages from the New Testament to portray Israel as a cosmological affront to God’s purposes in the Middle East.

“In making this claim,” Levine writes, Ateek, “erases Jesus’s Judaism,” adding that “If concern for the poor originates with Jesus, then the church might […] jettison the entire ‘Old Testament.’”

In the same text, Levine writes, “Any writing that separates Jesus and his first followers from Jewish identity, associates these proto-Christians with the Palestinian population, and reserves the label ‘Jew’ for those who crucified Jesus and persecuted the church is not only historically untenable but theologically abhorrent.”

Levine’s concerns do not prevent Cannon from promoting Ateek’s work, however. Cannon tells her readers that it is “important to understand his perspective as a leading Palestinian Christian voice calling for liberation.”

She then quotes a passage from Ateek’s 2017 book A Palestinian Christian Theology of Liberation: The Bible, Justice, and the Palestine-Israel Conflict (Orbis) as follows: “Jesus Christ was a Palestinian [Jew], as we are. He lived in the same land we live in.”

Note the brackets around the word “Jew.” That indicates it’s an insertion on Cannon’s part, which an investigation of Ateek’s text reveals it to be. Ateek actually wrote: “Jesus Christ was a Palestinian as we are.”

By taking the liberty of inserting the word “Jew” into the quote, Cannon attempted to obscure Ateek’s effort to strip Jesus of his Jewishness, which is one of Amy-Jill Levine’s primary complaints about Ateek’s writings.

This is a profoundly deceptive act on Cannon’s part.

First, she cites Amy-Jill Levine’s book, which documents how PCLT promotes antisemitism by stripping Jesus of his Jewishness.

Second, Cannon includes a quote from Naim Ateek that does exactly that — strips Jesus of his Jewishness.

And then, she alters the quote in a manner that obscures this fact from the reader.

Ateek’s attempt to strip Jesus of his Jewishness (which Cannon tries to obscure) is part of a larger strategy of detaching the Jewish people from the land of Israel. It is a form of supersessionism, which portrays Christians as having replaced the Jews as the people of God.

The notion that the Jews have been replaced or rejected is a trope regularly invoked by theological antisemites, which helps explain why Cannon altered Ateek’s writing.

The upshot is that by inserting the word “Jew” into Ateek’s text, Cannon fundamentally changes the meaning of what he actually wrote.

With her change, she makes it look like Ateek called himself a Jew, which he is not.

The text also promotes the work of Al-Haq, a Palestinian lawfare organization headquartered in Ramallah. Citing Al-Haq’s website, Cannon describes Al-Haq’s work as including “the documentation of human rights abuses, research, and studies on ‘interventions on breaches of international human rights and humanitarian law’ in East Jerusalem, the West Bank, and Gaza.”

What Cannon doesn’t convey is that Al-Haq, like a lot of other Palestinian “civil society” organizations, deploys legal challenges not to achieve rights for Palestinians, but to hinder the rights of Israeli Jews to exercise self-determination, denying them the right to life through lawless acts of terror.

The use of democratic institutions to undermine democracies has been a well-worn strategy of anti-Zionist (and anti-American) groups for a long time.

Al-Haq’s leader, Shawan Jabarin, was described by the Israeli Supreme Court in 2007 as “a Dr. Jekyll and Mr. Hyde” whose time was divided between leading “a human rights organization” and “as an operative in an organization [PFLP] which has no qualms regarding murder and attempted murder.”

In 2008, the Israeli Supreme Court reaffirmed its assessment of Jabarin, declaring that he was “among the senior activists of the Popular Front terrorist organization.”

Al-Haq’s ties to terrorist organizations were so serious and demonstrable that American  Express, Mastercard, and Visa stopped allowing their credit cards to be used to donate money to it.

In 2017, Al-Haq’s leader, Jabarin, defended the Palestinian Authority’s “pay-to-slay” program, which rewards Palestinian terrorists who murder Israeli civilians with regular salaries depending on the seriousness of the crimes committed (the more serious the crime, the more people killed or injured, the longer the sentence – the higher the payments).  If this pay-to-slay program were interrupted, Jabarin warned, “we are heading for a real crisis in Palestinian society and in due course toward an explosion.”

Al-Haq is not the type of organization that should be promoted in a book published by IVP, the book publishing division of InterVarsity Christian Fellowship/USA.

Al-Haq is not the only organization promoted in Cannon’s book. She also encourages readers to “explore the work” of Islamic Relief USA, which she describes as “one of the major development agencies” responding to the “realities” of interracial and interethnic violence “in the Arab world.”

What Cannon does not tell her readers is that Islamic Relief USA’s parent organization, which is headquartered in London, has been designated as a terror-financing organization by the United Arab Emirates and Israel. Moreover, international banks including UBS and HSBC closed down Islamic Relief’s accounts and stopped processing donations to the organization.

Islamic Relief also maintains financial links with several terrorism-linked groups in the Middle East outside of Gaza, including the Charitable Society for Social Welfare, which was founded by Al-Qaeda terrorist and “Bin Laden loyalist” Abdul Majeed Al-Zindani. The organization has been investigated in England for hosting speakers who have engaged in hate speech.

Islamic Relief USA has also promoted hate speech in the U.S. According to MEF, “In 2009, IR-USA ran an event with Abdullah Hakim Quick, an extremist preacher who has claimed that AIDS is caused by the ‘filthy practices’ of homosexuals and that the Islamic position on homosexuality is ‘death.’ Quick has also spoken of the ‘filth of the Yahud [Jews].’”

To make matters worse, Khaled Lamada, the former chairman of Islamic Relief USA’s board of directors, has been named in a prominent Egyptian newspaper as an operative of the Muslim Brotherhood. Lamada, who is no longer chairman of the IR-USA’s board of directors but still a member, has, according to MEF, posted messages in Arabic “praising the ‘jihad’ of the ‘Mujahidin of Egypt’ for ‘causing the Jews many defeats.’ He has republished claims on Facebook that praise Hamas for inflicting a ‘huge defeat’ against the ‘Zionist entity.’”

More Deceptions Regarding Gaza and Hamas

On page 221 of her text, Cannon laments the suffering of the Palestinians living in the Hamas-controlled Gaza Strip. She reports that while Israel removed soldiers and settlers from this area in 2005, “it still retains complete control over all air, sea, and land access to Gaza.” She then writes, “This blockade which Israel maintains with cooperation with Egypt, has severely restricted the movement of people and goods into and out of Gaza since 2007.”

So which is it? Does Israel maintain “complete control over … access to Gaza” or does Egypt also play a role in restricting the flow of goods into the area?

The way Cannon writes simply doesn’t make any sense. By using this dishonest rhetoric, Cannon is trying to obscure an unpleasant reality — that Egypt, like Israel, has been dealing with terror attacks from the Gaza Strip and has played a role in limiting the passage of goods into the area that can be used to launch attacks. And Egypt, like Israel, has worked to eliminate tunnels being dug from Gaza into its territory.

Cannon also downplays Hamas’s hostility toward Israel. She describes the organization as “an Islamic Palestinian militant group and political organization deemed by the United States organization as a terrorist group.” Egypt and the European Union have also designated Hamas as terrorist organization. Nowhere does she mention Hamas’s explicit desire for Israel’s destruction, which is clearly relevant given her stated desire for a peaceful settlement of the Israeli-Palestinian conflict.

How exactly is Israel supposed to arrive at a peace agreement with a terror organization dedicated to its destruction?

In sum, Cannon’s book works to obscure the challenges to peace in the Holy Land.

Would-be peacemakers need to tell the truth about such challenges.