In his July 1 Op-Ed in the New York Times, Nicholas Kristof uses several villages near Hebron, in the southern West Bank, as case studies to promote his view that Israel’s presence in the West Bank is “morally repugnant,” “oppressive and unjust,” and “wrong.” Kristof attempts to draw parallels between these towns and the occupation as a whole. But the most glaring similarity is that, in his discussion of both the West Bank and the villages, he leaves out key facts with the effect of wildly distorting reader understanding of the issues at hand.

Remarkably for a piece entitled “The Two Sides of a Barbed-Wire Fence,” not a single official from the Israeli side, the target of the piece’s harangue, is given voice.

And so, for all his righteous indignation aimed at Israel and “the occupation,” Kristof’s piece fails to take into account that consecutive Israeli governments have clearly indicated their readiness to turn over West Bank territory for a Palestinian state. Indeed, former Prime Ministers Ehud Barak and Ehud Olmert both offered to withdraw from almost the entire West Bank as part of a peace agreement; but Palestinian leaders, who apparently had priorities beside statehood and independence, rejected the offers.

Kristof offers more specific distortions when he zooms in to the village level.

Particularly egregious is the columnist’s description of Palestinians in the village of Tuba who, in Kristof’s account, are compelled to live in caves “because permanent structures are destroyed for want of building permits that are never granted.” In other words, Israeli policy in the West Bank for the past 40-odd years is so oppressive, so unjust and morally repugnant, that it pushes fellow humans into the last place most Americans would want to live.

B’Tselem, the organizers of Kristof’s selective tour of the Hebron hills and severe critics of Israel, apparently neglected to tell the New York Times journalist what the group acknowledged in a July 2005 information sheet about the cave dwellers. (Or if it did share this information with Kristof, he opted not pass it on to readers.) The B’Tselem information sheet explains a history of cave dwelling that long preceded Israel’s independence:

The southern Hebron hills … are full of natural caves in which Palestinians live and use as shelter for their sheep and goats. In addition to the natural caves, the ancestors of the current cave residents dug caves near wells and farmland. Each nuclear family has at least one cave that it uses as a residence. … B’Tselem’s survey shows that eighty-eight percent of the cave residents were born in the caves in the closed area. In fact, cave dwellers have been living in the southern Hebron hills at least since the 1830s.

The B’Tselem document also notes that “many” of the cave dwellers in these isolated villages also have houses in the nearby village of Yatta, and points out that Israel describes the villagers as residing in the caves only seasonally.

Mahmud Hamamda, a cave dweller in the nearby town of Al-Mufaqara, explained the logic behind his ancestors’ choice of home: “At that time they didn’t think of building houses. They preferred to dig caves because they were cool in the summer, warm in the winter and they cost no money” (Agence France Presse, 9/26/07). The same resident also made a statement at odds with Kristof’s picture of Palestinians that “don’t even have enough to drink.” AFP notes,

Then [Hamamda] sat down to a sumptuous dinner of chicken and rice, vegetable soup, and thick flat bread cooked in an outdoor oven. Nearly everything on the table was grown or raised outside on the rocky hillside.

“We have a lot of problems here, but we always eat well, and not just during Ramadan,” Hamamda says, before leaning back and lighting a handrolled cigarette packed with homegrown tobacco.

Indeed, B’Tselem and other groups have criticized Israel for having temporarily removed residents from the caves! It is all too typical of anti-Israel activism that when the government tries to remove the residents from the caves, Israel is damned for expulsions and interfering with a traditional way of life; but when the Israeli Supreme Court steps in and returns the residents to their caves, critics like Kristof condemn the fact that Palestinians live in caves.

Kristof’s description of West Bank Bedouins living in conditions that differ from Western norms is likewise typical of his deceptively selective journalism. He writes:

On one side of a barbed-wire fence here in the southern Hebron hills is the Bedouin village of Umm al-Kheir, where Palestinians live in ramshackle tents and huts. They aren’t allowed to connect to the electrical grid, and Israel won’t permit them to build homes, barns for their animals or even toilets. When the villagers build permanent structures, the Israeli authorities come and demolish them, according to villagers and Israeli human rights organizations.

To Kristof, this isn’t a story of traditionally nomadic and rural people trying to find their place in modern times, and in the process clashing with modern governments that require the building of homes and villages to be carefully organized and coordinated with the authorities. He prefers a story of Israeli immorality.
Perhaps that’s why the author leaves out key facts. An August 2008 report in the British Telegraph described challenges in this same village, but added an obviously crucial point missing from Kristof’s account.

“This is the worst dry year for the Bedouin,” declared Suleiman al-Hathalin, standing among the ramshackle collection of tin shacks and tents that mark his family’s land at Khirbet Umm al-Khair, an unrecognised Bedouin village in the West Bank hills south of Hebron. “My father and my uncle had the chance to live a true Bedouin life. But I am being deprived of this and now so are my children. The life of the Bedouin, the freedom of movement – it’s finished.”
At present, most Bedouin tribes are still stubbornly clinging on, spending what little money they have on artificial feed for their animals rather than succumbing to government p ressure to resettle into towns with running water and electricity.

Government pressure to resettle into towns with running water and electricity? Kristof apparently thinks his readers should be shielded from such information, lest it get in the way of his picture of a “morally repugnant” Israel on a quest to oppress Palestinians. The Telegraph story explains that the Israeli army “is trying to relocate them to another piece of land a few miles away,” and later yet again mentions “Israeli army orders to relocate them and demolish their decrepit homes.”

This information that Kristof withholds also casts in a different light his complaint that these Bedouin villagers pay $11 per cubic meter of water from tankers when they run out of water, a cost, he notes, that is “at least four times what many Israelis and settlers pay.” Water from tankers understandably costs more than water that is piped into towns — for example, the town to which Israel presses the Bedouin to move.

And it’s not only “many Israelis” who pay less than these villagers. Many Palestinians, too, pay well under $11 per cubic meter. Those in the area of Ramallah who receive water from the Jerusalem Water Undertaking pay between 4.10 and 6.85 shekels (or roughly between $1 and $2) per cubic meter, according to the most recent (undated) figures published on the Palestinian utility’s Web site. And Palestinians in Tulkarem and Jericho have historically paid even less than Palestinians in Ramallah — and less than consumers in Israel, who currently pay between 7.44 and 10.75 shekels.

He uses similar methods to mislead his readers when he contrasts especially poor Palestinians with Israelis in order to denunciate the latter group, even while ignoring the sharp discrepancies even within Palestinian society. Kristof says that farmers from the Palestinian village of Tuba “seethe as they struggle to collect rainwater while a nearby settlement, Maon, luxuriates in water piped in by the Israeli authorities.” Again, the implication is that this is another consequence of Israel’s “repugnant” involvement in the West Bank. But he ignores the fact that in the predominantly Palestinian city of Hebron, roughly 15 miles up the road from Tuba, Palestinians, too, “luxuriate” in water, quite literally, as the following photos show: 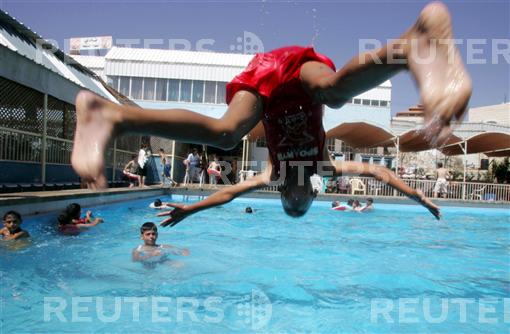 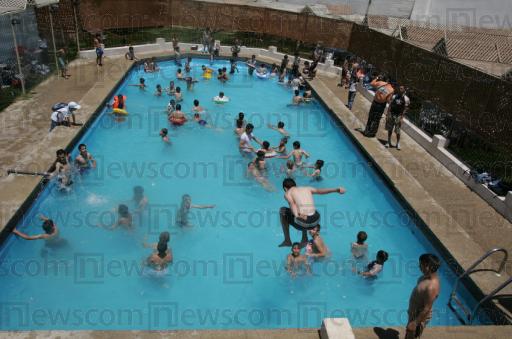 Palestinian youth enjoy cooling down at the local swimming baths in the West Bank town of Hebron, 25 June 2007. (Photo by Hazem Bader/AFP)

As to the demolitions Kristof describes in Umm al-Kheir, it is true that the Bedouins who resist government pressure to resettle, and instead build without permits, risk having their buildings demolished. But while this highlights unique challenges faced by a Bedouin community in transition, the problem of illegal, haphazard building is hardly exclusive Israel’s government or the West Bank. In fact, Fatah and Hamas governments have each demolished illegally built structures in the Gaza Strip. Kristof was apparently not especially moved by those demolitions, nor by the beatings simultaneously doled out by Hamas police.

Even if a handful of extremists among the settlers have attacked Palestinians, even if Israel hasn’t found the ideal solution to integrating the traditionally nomadic Bedouin, and even if Israel’s Supreme Court challenged a government decision to remove villagers from their caves, the bottom line is that Kristof, despite his perceived role as an educator, omits and contorts facts serves to deceive readers about the situation in the West Bank. His caricature of a villainous Israeli occupation completely misleads on the finer points, and more broadly ignores the fact that Israel’s administration of the West Bank is legal under international law, that it began after Israel was attacked from the territory in 1967, that Palestinians rejected peace offers that would have turned almost the entire territory into the first ever Palestinian state, and that, in some respects, Palestinians benefitted from Israeli administration. As the AFP story cited above notes,

The remote region remained largely unchanged until 1967, two years after Hamamda was born, when Israel occupied the West Bank. The economy took a turn for the better and people began to move into the villages.