Nicholas Goldberg’s Feb. 21 Op-Ed (“The long demise of the Israeli-Palestinian peace process“) had stated: “Netanyahu has gone so far as to threaten to annex the entire West Bank.” Netanyahu’s annexation plan involved parts of Area C of the West Bank, including the Jordan Valley and settlements elsewhere in the territory, amounting to a total of some 30 percent of the disputed West Bank. 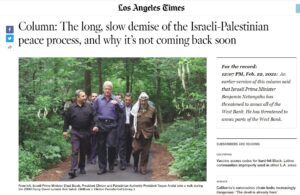 In an April 6, 2019 Channel 12 (Israel) interview with Rena Matzliach, Netanyahu vowed to annex Israeli settlements in the West Bank, along with the smaller outposts that Israel considers illegal; not the entire West Bank.
The New York Times accurately reported at the time:

Mr. Netanyahu was pressed in a live television interview Saturday night over why he had not already annexed settlement blocs like Maale Adumim and Gush Etzion, two large Jewish communities built on occupied territory on the outskirts of Jerusalem. He vowed to begin the effective annexation of those and other, more isolated areas under Jewish control.
“The question you’re asking is an interesting one: Will we move on now to the next stage?” he said. “And the answer is, yes. We will move on to the next stage.”
Asked by his interviewer if that meant he would annex the settlement blocs, Mr. Netanyahu said yes, but that he would not stop there.
“I’m going to apply sovereignty, but I don’t distinguish between settlement blocs and the isolated settlement points, because from my perspective every such point of settlement is Israeli,” he said. “We have a responsibility as the Israeli government. I won’t uproot anyone and I won’t place them under Palestinian sovereignty. I’ll look out for everyone.”
The West Bank is home to about 2.8 million Palestinians and more than 400,000 Jewish settlers.
Mr. Netanyahu did not say whether he would seek to annex areas now under Palestinian control under the Oslo Accords. [Emphasis added.]

Noga Tarnopolsky’s LA Times news report at the time was erroneous and ought to be corrected (“Netanyahu issues a startling promise . . .” April 7, 2019). About the Channel 12 interview, Tarnopolsky erred: “Netanyahu continued, promising that if reelected, he plans on extending a ‘gradual imposition of Israeli sovereignty’ over the entire territory.” The news story, despite the time that has passed, ought to be corrected as well, as Netanyahu did not say he would annex the entire West Bank.
The Guardian and Financial Times previously corrected after erroneously reporting that the sovereignty (ie annexation) plan involved the entire West Bank or after overstating the extent of West Bank land involved, respectively.
To its credit, The Los Angeles Times Opinion desk immediately and diligently corrected the error in the online edition. The digital article was modified to accurately state: “Netanyahu has gone so far as to threaten to annex parts of the West Bank.”
Moreover, a correction was posted prominently at the top of the article, stating:

Separately, the Op-Ed misrepresented the history of Hamas suicide bombings, erroneously reporting that they began after the February 1994 Hebron massacre and November 1995 Rabin assassination. Goldberg wrote:

The Israeli-Palestinian peace process, which had gotten underway with so much optimism and excitement only a few years earlier, was already coming undone, and I was watching it happen. First, Baruch Goldstein, an Israeli settler on the West Bank, had massacred 29 Palestinians in a Hebron mosque in 1994. Then in November 1995, a right-wing Israeli law student, Yigal Amir, assassinated Prime Minister Yitzhak Rabin at a peace rally.

Now [Goldberg was recounting his time in Israel 25 years ago] the Islamic militants from Hamas were taking their turn: They blew up the No. 18 bus and then, over the next few weeks, months and years, they blew up more buses, a shopping center, a pizzeria, a coffee shop, a discotheque.

Among the numerous Hamas attacks which predated Goldstein’s atrocity (which was not “[f]irst”), was the April 16, 1993 suicide bombing at Mehola Junctionin which one was murdered and five injured. Media outlets that have previously corrected the error that the Hebron massacre came “first” include the Economist and Times of London.

This post was amended on Feb. 28 to make clear that one was murdered in the Mehola Junction attack. The second person who died in the attack was the suicide bomber.

To read this post in Arabic, please see CAMERA Arabic.