In 1920, the vulnerable Jewish minority in Palestine formed the Haganah, an underground self-defense organization, after concluding the British authorities weren’t particularly interested in protecting Jews against Arab attackers.

Or in New York Times speak: the Haganah was “an underground military organization sometimes battling alongside the colonizing British against the Arabs.”

Partners with colonialists and attackers of Arabs. This is how Times features reporter Penelope Green cast the organization in her obituary for Ruth Dayan, an Israeli fashion-house founder and peace activist. Dayan had been married to Israeli political leader Moshe Dayan, who in his youth was active in the Haganah, and this was the author’s entrée to the skewed summary.

There is no shortage of experts whom Green could have looked to for a more fair-minded description.

The Haganah “was organized to combat the attacks of Palestinian Arabs on Jewish settlements, and it effectively defended them despite being outlawed by the British authorities and being poorly armed,” begins an entry in the Britannica Concise Encyclopedia.

An article in the Encyclopedia of Judaism states that “The Haganah was the underground military organization of the yishuv, the Jewish community of Palestine. It was formed in June 1920, in response to Arab attacks against Jewish civilians and the tepid British military response.” (In April 1920, five Jews were killed during anti-Jewish riots in Jerusalem.) 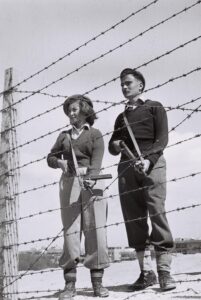 According to an entry by Ahron Bregman in the Encyclopedia of War, “It was established in June 1920 following Arab attacks on the Yishuv, the Jewish community in Palestine, and it was aimed at providing the Palestinian Jewish community with a self‐defense organization that could reduce dependency on the British army for protection.”

The Haganah followed from the idea of “establishing a defense organization that would protect the yishuv throughout Ereẓ Israel,” as Jewish leaders “came to realize that it was impossible to depend upon the British authorities and that the yishuv must create an independent defense force,” explains Yehuda Slutzky in Encyclopaedia Judaica.

This “underground military defense organization for Jewish community” was founded “in response to Arab riots,” states Pierre M. Atlas in the Encyclopedia of the Modern Middle East and North Africa.

Historian Yehuda Bauer wrote that the Haganah was viewed as a “citizens defense group,” a type of “Jewish force for the protection of life and property.”

And so on. The above articles all correctly highlight the organization’s central role of defending the Jewish community — indeed, the Hebrew word haganah translates to “defense.” But the New York Times description seems calculated to make the organization seem offensive in nature — and to be offensive to readers’ sentiments.

The newspaper has indicated it would not redress the skewed language.

There’s a particular pattern at play here. Last October, the Times characterized the antisemitic terror group Hezbollah as follows: “Among Hezbollah’s grievances against Israel are disputes over land and maritime borders.”

“Among Hezbollah’s grievances against Israel are disputes over land and maritime borders.” @NYTBen, is that a fair way to describe an org committed to the destruction of Israel, and which calls it a “tumor” and a “virus” that must be eliminated? https://t.co/8utdinK7Cs

Hezbollah’s primary grievance, though, is Israel’s very existence. It is openly committed to the destruction of the country. Only a few months prior the newspaper’s flaccid characterization of Hezbollah, in fact, the leader of the organization publicly reiterated his view that “Palestine from the river to the sea is the property of the Palestinian people,” and that Jews “must leave” the country. (This was not the first time the newspaper has softened Hezbollah.)

Also in October, the newspaper whitewashed the virulent antisemitism of Amin al-Husseini, a senior Palestinian leader who, as part of his alliance with the Nazis, broadcast from Berlin to the Arab world anti-Jewish vitriol including calls for his followers to “kill the Jews wherever you find them.”

Rather than acknowledge al-Husseini’s well-documented antisemitism, the New York Times opted to cast him merely as someone who collaborated with the Nazis “against Zionism.”

So while the Haganah, a Jewish defense organization, is cast in a harsh light that mischaracterizes its fundamental role and behavior, the same newspaper downplays the extremism of antisemitic organizations and individuals that promote and practice violence against Jews in the Middle East and beyond.

The Haganah focused on defending the Jewish community in Palestine, and also on facilitating illegal immigration of Jewish refugees.
Donate Now