On Feb. 15, 2022, NPR member station WXXI in Rochester, NY, aired a biased and inflammatory segment of the program “Connections with Evan Dawson.” The episode was headlined “Discussing the motivations bringing Black Americans to the Palestinian cause,” and the participants were four anti-Zionist activists finding common cause between the Black Lives Matter mission in the U.S. and Palestinian, anti-Zionist activists in Israel. Both were cast as liberation movements against imperialists, colonialists, white supremacists and racists.

Indeed, the anti-Zionist Boycott, Divestment and Sanctions (BDS) movement has long sought to attach itself to the Black Lives Matter (BLM) movement and garner support among black activists.  BDS activist Ahmad Abuznaid co-founded a BLM-affiliated group, Dream Defenders, from which he urged black activists to follow in the footsteps Malcolm X, Stokely Carmichael and other Black Power radicals who were extreme anti-Zionists — Stokely Carmichael famously declared “the only good Zionist is a dead Zionist” — and called for re-establishing and fortifying the relationship between anti-Zionists and the new black American leaders in the “fight for liberation.”

Abuznaid recruited black activists to join his “Delegations to Palestine” to meet with BDS co-founder Omar Barghouti and embrace the BDS movement. His efforts succeeded, resulting in a  2015 publicly issued “Black Solidarity statement with Palestinians” using the jargon associated with eliminating the Jewish state – buzz-words like Palestinian liberation and settler colonialism.  Even before the BLM movement emerged as the leading black rights movement in the US following the 2020 killing of George Floyd, its co-founder and (later to become) executive director Patrisse Cullors called on her followers to “end the imperialist project that’s called Israel” – in other words, eliminate the Jewish state.

The NPR program neither explored this background nor aired a nuanced discussion, debate or diverse views on the topic. Instead, the show featured the mendacious propaganda of Iman Abid-Thompson, recently appointed National Director of Advocacy and Organizing at the U.S. Campaign for Palestinian Rights (USCPR), the American branch of the BDS movement that seeks the elimination of the Jewish state.

The nature of anti-Zionist activism today, as exemplified by the BDS movement is both, in effect and intent, anti-Semitic in that it denies nationhood and a homeland to the Jews, singles out Israel as a Jewish collective for defamation, holding it to standards that don’t apply to any other country, and  serves as a cover for anti-Semites to express classic-Semitism under the guise of criticizing Israel or supporting Palestinian rights.

Abid-Thompson used the program as a platform to express her extremist views and those views were bolstered by progressive Brighton Town board member Robin Wilt.  Joining them was former Black Panther member Jalil Muntaqim, introduced as a community organizer, and a local Palestinian-American student, Jonathan Khoury, an acquaintance/friend of Iman Abid and a fellow activist.

Removing agency and responsibility for the ongoing Palestinian-Israeli conflict, Abid-Thompson insisted the term “conflict” has been “completely destroyed as a term we should be using” and that it should be reframed as a Palestinian liberation movement struggling to free itself from an evil imperialist-colonialist apartheid state, i.e. the Jewish state.

The conversation was cleverly presented as a forum in which representatives of downtrodden minorities were granted the unique opportunity to speak truth to power, permitted to recount their own “reality” without fear of being silenced by the white supremacist powers that be. Anti-boycott laws and legislation adopting the IHRA definition of anti-Semitism were presented as attempts to suppress unpopular truths about the evils of a settler-colonial Jewish state.

It was a clever ruse because it rendered the verity of the most outrageous allegations as beyond dispute.  Iman Abid-Thompson lamented the “silencing, ostracizing, complete pushing out and rejection of what Palestinians are experiencing.” She cast her defamatory slurs of the Jewish state as the “truths that people don’t want you to hear, people don’t want you to know!”  Her  message came across loud and clear: Anyone daring to challenge her tales of Israeli abuse is a part of the racist power structure, guilty of trying to silence the “reality”of oppressed and marginalized communities.

Thus, secure her charges would not be challenged, Iman-Thompson put forth her horror fantasy of an Israeli settler-colonialist state where Palestinian children are seized from their mothers and taken from their homes in order to make way for Jewish settlers.  According to this nightmarish tale, anyone caught speaking up about the alleged atrocities, including journalists reporting critically about Israel, “are not just silenced, not just detained, they are actually being killed.”

Needless to say, Israelis do not kidnap children to take over their parents’ homes. Nor are journalists and others murdered either for reporting the truth or for spreading lies about Israel.  Yet despite the ludicrous and obviously false nature of Abid-Thompson’s charges, they were allowed to stand without challenge. 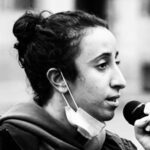 It would not have been difficult for NPR staff to ascertain before inviting her as the main speaker that Iman Abid-Thompson was far from a reliable witness, that she was a radical extremist with a propensity to go overboard.  After all, the same NPR station had reported just a year earlier that Abid-Thompson had been investigated and condemned by the New York Civil Liberties Union when she served as director of its Genesee Valley chapter.  She had gotten carried away at a protest outside the office of the county’s district attorney, invoking charges of “white supremacy,” and hurling obscenity-laced threats not only against the elected officials but against their children, as well:

“I don’t know who the f*** Sandra Doorley thinks she is, but she made this . . . courtyard a trespassing zone? Is she out of her f***ing mind?” You’re lucky that I work for the f***ng ACLU ‘cause litigation is about to pop off. This is white supremacy at its best, when people think that the law is within their side that they can do whatever the f*** they want. We’ve been watching them, we’ve been reading their damn policies, we know your names we know where your children go to school don’t you f*** worry”.

Yet, despite her disturbing history, Abid-Thompson in her new role as a BDS director, was invited to promote her defamatory fabrications, with her falsehoods featured as the linchpin of the discussion. 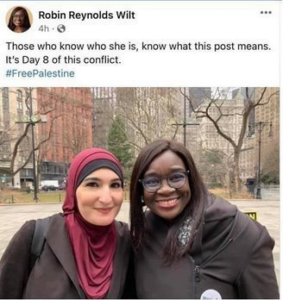 To support Abid-Thompson, elected official Robin Wilt was invited to the WXXI studiio to participate in the discussion, as well. Wilt is a controversial figure because of her ongoing “Free Palestine” (a slogan commonly used as shorthand for eliminating the Jewish state) activism. While Hamas was raining missiles down on Israel’s civilian population last spring, she posed with notorious BDS activist Linda Sarsour and posted the photo on her Facebook page under the hashtag #Free Palestine. During that same period, she participated in a “Stand With Palestine” rally. She declares her “allyship” with the “oppressed” Palestinians despite the difficulties she claims to endure due to the “significant Jewish population” among her constituents. She displays an animus toward her Jewish critics, whom she portrays as bigots and hypocrites. These positions have prompted a petition to remove Wilt as  liaison to the Diversity Committee of the Town of Brighton.

Wilt predictably bolstered  Abid-Thompson’s positions with her own points:  The African-American human rights mission is part of an “international movement against imperialism and oppression across the globe.”  Wilt sees “similarities in state-sponsored oppression” which “always looks the same…There’s always silencing. There’s always erasure. Always denial of the struggle…trying to pass policy that will deny the experiences of people trying to gain their liberation.” She considers policies like anti-BDS legislation and the adoption of the IHRA definition of anti-Semitism as a “problematic” attempt to “curb speech.”

Jalil Muntaqim, who had been a member of anti-Zionist, Black Liberation revolutionary organizations (Black Panthers and Black Liberation Army), joined the discussion by telephone to contribute similarly extremist remarks.  He called the Palestinians the indigenous people of Israel and equated the “white supremacist” powers in the U.S. with the white ethnic majority in power (meaning Jews) in “Palestine” which, he claimed, practices “separation of races.” He equated “white supremacy” with “Zionism,” the consequences of which, he said, are “the diminishment of our [Black and Palestinian] lives…what one would consider genocide.”

Jonathan Khoury, who also joined by telephone, equated historic racial discrimination against Blacks in the U.S.– pointing to “redlining” and destroying black neighborhoods in the name of “urban renewal” – with “things going on in Palestine.” As an example, he gave “the City of Silwan which is being demolished to make way for a biblical park.”

This was patent nonsense.  In his ignorance, Khoury was parroting the deceitful propaganda of anti-Israel activists.

In fact, Silwan is neither a city, nor is it being demolished. It is a small neighborhood in Jerusalem, of which one area, the King’s Garden, is slated to be a biblical tourist park. The only structures slated for demolition are those that were built illegally on parkland not zoned for residential or commercial use. This area of Silwan had been preserved for centuries – under Jordanian, British and Ottoman rule – as a lush conservation zone. When the land came under Israeli control in 1967 (after Jordan attacked Israel), the Jerusalem municipality under Israel’s authority similarly designated this portion of the Silwan neighborhood to remain as non-residential parkland. The Jerusalem municipality’s plans to preserve the land as public parkland were ignored by Arabs in the area who built houses without permits.  Because these structures were built illegally, the entire area lacks infrastructure. With no adequate educational facilities, roads, sidewalks, community facilities, open recreational spaces, electricity, water, and parking, the once lush area has been turned into a slum. The Israel Antiquities Authority has complained that the illegal building on this land has irreversibly damaged antiquities.

The charges that roll off Khoury’s tongue are thus far from the truth.  But Evan Dawson, his producers and WXXI apparently care little about the factual accuracy of the assertions made on the program. None of the defamatory falsehoods about Israel were refuted. On the contrary, Dawson amplified them with his own comments about a “marginalized society shattered by violence and bigotry” and prodded his anti-Zionist guests with leading questions.

This is not the first time that Dawson has featured Iman Abid promoting BDS and attacking legislation against it. On January 15, 2019, WXXI aired an episode of the Evan Dawson program, entitled “The Debate Over BDS.” And while the former CEO of the Jewish Federation of Greater Rochester, Larry Fine, was brought on as a counterweight to Abid’s pro-BDS rhetoric, he, like Abid, expressed opposition to anti-BDS legislation. Now, two years later, Dawson does not even bother with the pretense of providing balance.

WXXI listeners and Rochester residents must beware: Rochester BDS activists are amplifying their vilification campaign against the  Jewish state with the help of the local NPR station!