With the house lights down, it was not possible to read the program and thus keep track of what came from Syria, Egypt, Afghanistan, Somalia, Palestine or elsewhere (“Kronos Quartet aims to transcend borders; The string group lines up pieces from ‘banned’ nations. The result: universal”).

On more than half a dozen occasions, The Los Angeles Times has previously corrected references to Palestine relating to Israel, the West Bank or the Gaza Strip, post 1948. Considering that the article last week is referring to the contemporary Palestinian music group Ramallah Underground (located in the West Bank), the reference to Palestine is inaccurate. The most recent correction, June 28, 2018 (also concerning a calendar article), stated: 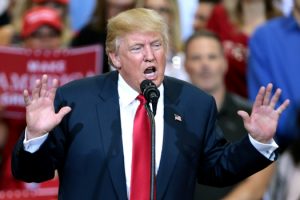 In a separate error in this month’s Calendar section, the print subheadline claims that “The string group lines up pieces from ‘banned’ nations,” and then goes on to discuss music from Egypt, Afghanistan and “Palestine” [sic], none of which was on the travel ban list. As The Los Angeles Times reported June 27, 2018 (“Justice vote to uphold president’s travel ban“):

Following communication from CAMERA, The Los Angeles Times has commendably corrected both points.

A Dec. 15 correction posted at the top of the digital article reads:

An earlier version of this review cited music from Palestine; the text should have said music from the Palestinian territories. Also, the review has been updated to reflect the fact that some, but not all, of the countries represented on the concert program were included in executive orders restricting entry to the U.S. 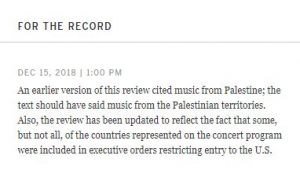 Editors commendably revised the text to refer to “Somalia, the Palestinian territories or elsewhere,” instead of “Somalia, Palestine or elsewhere.” In addition, they explicitly made clear that not all of the mentioned countries are included in the travel ban, adding the following words that appear here in bold: “And yet pieces from Middle Eastern and African nations, some hit by the travel ban and some not, along with a set of songs sung by the Iranian vocalist Mahsa Vahdat …”