For one reason or another, mainline Protestant peacemakers find it difficult, if not impossible, to speak openly and directly about Palestinian violence against Israeli civilians. In particular, they can’t say the word “Hamas,” the name of an antisemitic terrorist organization that seeks Israel’s destruction and which has launched thousands of rockets into Israel.

Hamas, the group that mainliners cannot name, does a lot of really bad things and causes a lot of suffering. It hides its rockets in schools and hospitals, teaches children to hate Jews, and has encouraged Palestinians to gather at Gaza’s boundary with Israel to give cover for armed terrorists seeking to penetrate the security barrier. It recruits people to serve as human shields, steals food and fuel from rank-and-file Palestinians to give to its leaders, and takes cement allowed into Gaza to rebuild peoples’ homes and uses it to build attack tunnels into Israel. But because mainliners can’t — or won’t — say the word “Hamas,” mainliners have a tough time confronting the bad things it does.

The overall effect of Christian peacemaking rhetoric is to give license to Palestinian violence while blunting Israel’s ability to protect the lives of its citizens.

Because of the mainline refusal to speak about Hamas’s bad acts, the peacemaking narrative offered by mainline activists and the churches that support them is profoundly distorted. In the mainline narrative about violence in the Holy Land, anti-Jewish violence is mostly unremarkable, while Israel’s efforts to protect Jewish lives and welfare is inherently blameworthy. Hamas terrorists get a pass for terrorizing Israelis and Israelis are condemned for fighting back.

The overall effect of Christian peacemaking rhetoric is to give license to Palestinian violence while blunting Israel’s ability to protect the lives of its citizens.

One recent example of this phenomenon is evident in an action alert issued on Aug. 16, 2018 by the “Peace Not Walls” campaign of the Evangelical Lutheran Church in America (ELCA). The action alert begins with the following paragraph:

Earlier this month, rockets were fired from Gaza into Israel and the Israeli military struck back into Gaza, resulting in injuries to Palestinians and Israelis and the deaths of Palestinians, including a pregnant woman, her 18-month-old child and a 30-year-old man.

Did you see that? “Rockets were fired” and the “Israeli army struck back,” causing the death of three Palestinians, including a pregnant woman, her baby and a 30-year-old man.

ELCA simply can’t be bothered to say who fired the rockets into Israel, nor can the church be bothered to acknowledge that these rockets drove thousands of terrorized Israelis into bomb shelters, but has no problem mentioning Israel when people in the Gaza Strip are killed.

Meanwhile, when Israelis are driven into bomb shelters or live in fear because of terrorists trying to tunnel or sneak their way into Israel to kill or kidnap Jews, ELCA can’t even say the name of the perpetrating organization — Hamas.

ELCA peacemakers simply use the passive voice to weasel their way out of speaking about Hamas’s misdeeds. Hamas, the terrorist organization which seeks Israel’s destruction and which controls the Gaza Strip is not mentioned — even once — in the alert, while Israel is mentioned nine times.

It’s interesting how ELCA’s alert can promote Hamas propaganda without even mentioning the organization the church is shilling for. The third paragraph of the declares that the violence “follows months of protests that started out as largely nonviolent and were met with lethal force by the Israeli military.”

The phrase “largely nonviolent” is a lie. Most of the people who showed up at the “March of Return” protests, which were a clear and obvious attempt to invade Israel, did not carry guns or bombs, but enough of them did to make the invasion a serious threat to Israelis living near the Gaza Strip. For Israelis living near the boundary between Israel and Gaza, Hamas’s “March of Return” represents a clear threat to their lives.

What do ELCA’s peacemakers think will happen if Palestinians succeed in breaking through the fence?

Did ELCA’s peace activists not hear Hamas leader Yahya Sinwar declare that “We will tear down the border and we will tear out their hearts from their bodies”?

Did ELCA’s peace activists not hear Hamas leader Mahmoud Al-Zahhar declare in May   that when Hamas talks “about ‘peaceful resistance,’ we are deceiving the public”?

Did the so-called peace activists at ELCA not see the footage of Hamas terrorists trying to break into Israel?

If three people try to break into a home and only one of them has a gun, can we call the group of them together “largely nonviolent” the way ELCA peace activists describe the “March of Return” rioters? 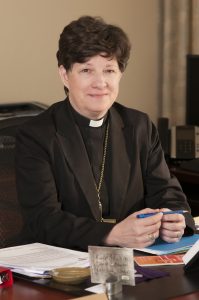 Sadly, it appears that ELCA’s “largely nonviolent” messaging about Hamas is promoted by the denomination’s Presiding Bishop, Elizabeth Eaton. In a statement issued in May, Bishop Eaton approvingly quoted Bishop Sani-Ibrahim Azar from the Evangelical Lutheran Church in Jordan and the Holy Land (ELCJHL) who declared that “We believe that violent actions against the Palestinian civilians will hinder the potential for peace and reconciliation efforts between Israel and Palestine and will only lead to more violence and bloodshed.”

The fact is, Hamas has admitted that most of the Palestinians who have been killed during the “March of Return” riots have been members of Hamas or other terror groups. When will the folks at ELCA wake up to the reality of Hamas’s culpability for death and suffering in the Gaza Strip? (By the way, in the statement Bishop Eaton offered in May, she makes no reference to Hamas.)

Several paragraphs into the alert, ELCA peacemakers offer a brief gesture of concern for Israeli safety when it quotes a statement issued by three other humanitarian groups. The quoted text reads:

While Israel has legitimate security concerns – including indiscriminate rocket fire from within the Gaza Strip by armed groups, which constitutes a violation of IHL – its response should not contravene international law. Measures implemented as a response to incendiary kites and balloons – the actions of selected groups and individuals inside the Gaza Strip – have a severe, detrimental impact on civilians who have done nothing to deserve it.

There is no doubt that Palestinians living in Gaza have suffered as result of Israel’s attacks on Hamas. This suffering is tragic and lamentable but does not qualify as a violation of international law. As Peter Lerner, former spokesman for the IDF has declared, the death of civilians is not necessarily a violation of international law. Writing in the Jerusalem Post, Lerner reported:

Hamas established their command centers in hospitals, they launch rockets from schoolyards and they build attack tunnels from green houses. Hezbollah have turned entire villages into fortified positions. Our enemies intentionally operate from the civilian arena to attack Israeli civilians indiscriminately.

Until ELCA’s leaders and peacemakers stop treating Hamas like Voldemort in the Harry Potter universe — as the one who must not be named — they will be continue to act, whether they mean to or not, as shills for the organization, just as they did in their most recent statement.