After Lamont Hill received flak for posted a smiling picture of himself with notorious anti-Semitic activist Louis Farrakhan, he defended his right to associate with whomever he wants, while claiming not to share Farrakhan's articulated anti-Semitic sentiments. See below for a detailed update.

The Investigative Project on Terrorism provides new evidence that Lamont Hill has progressed from being a radical, anti-Israel propagandist and justifier of terrorism to one who directly promotes Palestinian violence and terrorism against Israelis.

Lamont Hill was one of the advertised speakers at a conference by a leading BDS (Boycott, Divestment and Sanctions) group that was held on September 28-30, 2018. In an audio recording of Lamont Hill’s remarks there, he can be heard using  his anti-Israel propaganda to advocate for violence.

He repeatedly urges his audience not to “romanticize nonviolence, ” and concludes that "we have allowed this nonviolent thing to become so normative that we're undermining our own ability to resist in real robust ways."

He bemoaned Israel’s employment of the Iron Dome air defense system to intercept short-range rockets and artillery shells fired into Israel, because, he lamented, “it takes away all of Hamas's military leverage.”

And he labelled the call for Palestinians to reject hatred and terrorism “offensive and counterproductive.”

So by urging Palestinians and their supporters to forget about non-violent protests and to “resist in real robust ways,” Lamont Hill is advocating for the same type of terrorism he justified in the past, i.e. rocket fire, kidnappings, and murders of Israeli civilians.

It is perhaps unsurprising that extremists like Lamont Hill become ever more radicalized as time progresses. The question is at what point will Lamont Hill be considered too radical to feature as a “political commentator” or as a "professor"? Do mainstream media outlets and U.S. universities really want to be linked to someone who advocates terrorism?

Nation of Islam leader Louis Farrakhan is notorious for his anti-Semitic (and anti-American) rants. He proclaimed Adolf Hitler "a very great man" while  characterizing Jews as "Satanic"and most recently, compared Jews to "termites."  So when Lamont Hill posted a smiling picture of him with his arm around this anti-Semite, crowing about how he was "blessed" to spend time with his hero, he was taken to task. 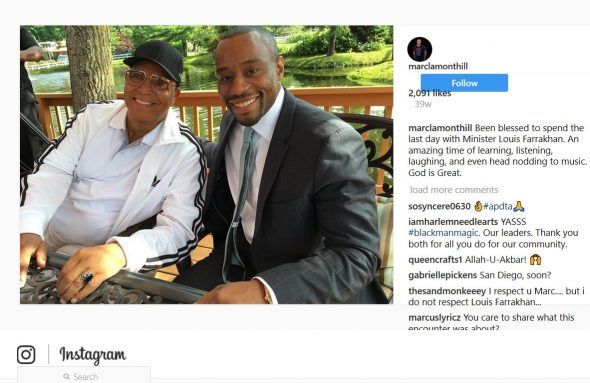 Lamont Hill expressed outrage that he was criticized for embracing the infamous racist, although he felt compelled to somewhat distance himself from Farrakhan's flagrant anti-Semitic pronouncements: 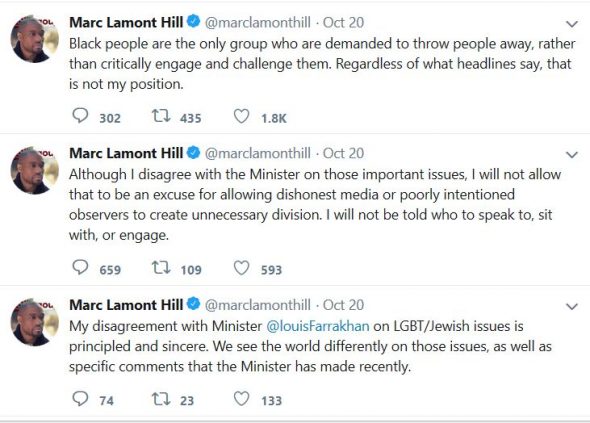 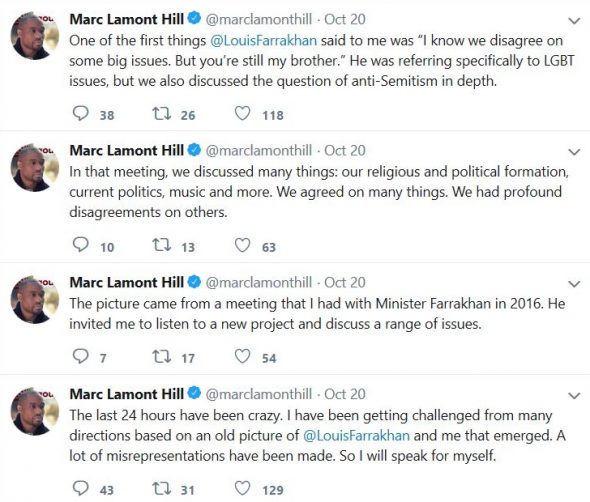 The CNN commentator takes exception to the description of Farrakhan as an anti-Semite. In an interview with Farrakhan's online news site, The Final Call,  Lamont Hill clarifies:

I have tremendous respect for the Nation of Islam, for the work that has been done. I am not embarrassed, ashamed or regretful that I met with the Minister. I have disagreements, but I also have considerable areas where we agree. Regardless of what headlines say, while I may disagree, or even at times renounce a comment or idea that I think is wrong or bad, I do not renounce him. I have never renounced the Minister or the work that the Nation has done for 88 years...

...I do not believe, based on my understanding and my reading of anti-Semitism, , that he is an anti-Semite. I do believe that he has made comments that I have found to be anti-Semitic, and I think that is why it’s important to have those conversations because we can differ on policy and we can differ on ideology, we can differ on tactics...To me when you say someone is ‘anti-Semitic,’ you are saying they have a particular investment in doing harm to Jewish residences, to promoting narratives about them for a particular end that I don’t believe the Minister intends... So to be very clear because I don’t want to sound like I’m equivocating, I think that the Minister has said things I have found to be harmful to Jewish brothers and sisters that I would read as anti-Semitic as a comment. Do I believe that he is an anti-Semite? No.

While Lamont Hill claims not to share Farrakhan's radical anti-Semitic, pro-Hitler views, he does support Palestinian terrorism against Israeli Jews and denies Jews the right of self-determination in their historic homeland. It is apparently just a question of degree.