In his final act as Israel’s ambassador to the United Nations, Ron Prosor urged the Security Council and Secretary-General Ban Ki-moon to denounce the rise in vicious terrorist attacks against Israeli citizens “in a clear and unequivocal manner.” Prosor said, “Israelis are being attacked and murdered in the streets, in their vehicles, and even in their homes, and the UN stands by in silence.”

The increase in terrorist attacks is “a result of the ongoing instigation to violence by the Palestinian leadership,” Prosor declared. “Palestinian officials continue to use inflammatory rhetoric and dangerous incitement, intensifying this wave of terror against Israeli citizens, and it must stop.”

According to a Google News search, only the Israeli and Jewish press reported on Prosor’s statement.

It’s not surprising the mainstream news media have ignored the statement as they have also overwhelmingly neglected to provide coverage of the content, pervasiveness and psychological impact of Jew-hatred being inculcated in the Palestinian public via Palestinian media, mosques, schools and officials.

The epidemic of recent attacks on Israelis followed closely on the heels of Palestinian Authority President Mahmoud Abbas’ speech at the UN General Assembly where he fallaciously accused Israelis of “committing repeated, systematic incursions upon al-Aqsa Mosque” and of trying to “undermine the Islamic and Christian sanctities in Jerusalem, particularly… al-Aqsa Mosque.” He warned events could —or, perhaps, urged Palestinians to— “convert the conflict from a political to religious one, creating an explosive [sic] in Jerusalem and in the rest of the occupied Palestinian territory.”

This is what that explosion looks like. Here is a video of a Palestinian Arab stabbing an Israeli police officer in the neck. 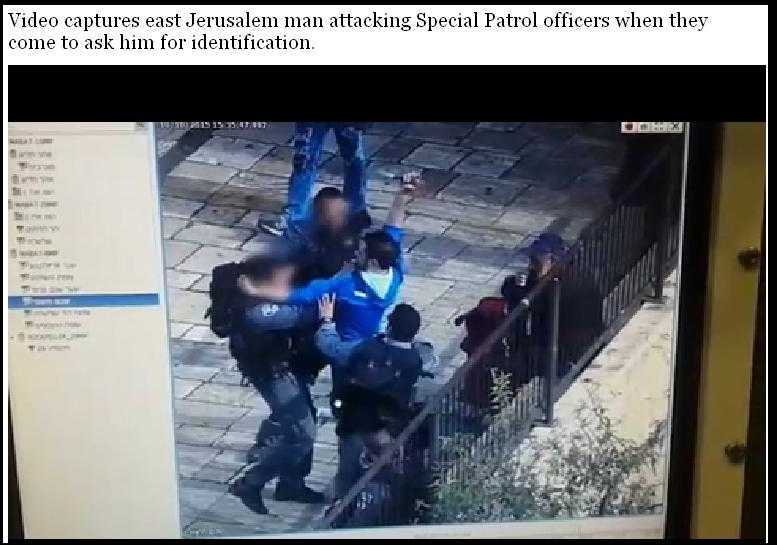 Regarding the connection between the incitement and the deluge of violence, CAMERA has reported about Mahmoud Abbas:

In his August 1 speech denying the 3,000 year-old Jewish connection to Jerusalem, Abbas claimed that Israel imagined it could “by brute force” “invent a history.” PA media elaborated on this imagined conspiracy, denying any Jewish connection to the land of Israel, eretz Yisrael, while inciting Palestinian Arabs:

“The story of the Temple is nothing but a collection of legends and myths for political reasons. They [Jews] have set Palestine and Jerusalem as their goal, and have used the myths in the service of their declared goals of occupation and imperialism. In the spirit of the delusions and legends, they try to get rid of the Al-Aqsa [mosque] and establish their so-called ‘Temple’—the greatest crime and forgery in history.”

Outrageously, The New York Times recently ran an article echoing the Palestinian falsehoods, questioning whether or not the two Jewish Temples actually stood on the Temple Mount. After a deluge of complaints, the newspaper corrected on that point, yet the article was riddled with other journalistic problems. Like the news pages when it comes to the Arab-Israeli conflict, the editorial pages are deeply problematic. It’s no surprise then that, asked what is “The most common complaint about the paper’s opinion coverage?” opinion page editor Andy Rosenthal answered, “The most common complaint is that we’re anti-Israel.”

Recently, far from condemning the increased terrorist attacks on Israeli Jews and urging restraint, Mahmoud Abbas justified the violence saying, as covered by Palestinian Media Watch, “The Palestinian side did not attack and did not do anything against the Israelis. If they [Israelis] think that the [Palestinian] people in Jerusalem are protecting themselves, that is our right. We have to protect our holy sites.”

Protection of Muslim holy sites is a long-standing canard used by Arab leaders to incite violence against Jews. As CAMERA has reported:

According to Dutch-Canadian journalist Pierre Van Passen who was in Palestine at the time, fabricated pictures of Muslim holy sites in ruins were handed out to Hebron Arabs as they were leaving their mosques on Friday, August 23, 1929. The captions on the pictures claimed that the Dome of the Rock was bombed by the Zionists. That evening, armed Arabs broke into the Yeshiva (Talmudic academy) and murdered the lone student they found. The following day, an enraged Arab mob wielding knives, axes, and iron bars destroyed the Yeshiva and slaughtered the rest of the students there. A delegation of Jewish residents on their way to the police stationwas lynched by an Arab mob. The mob then proceeded to massacre Hebron’s Jews — both Sephardi and Ashkenazi — who had lived peacefully with their Arab neighbors for years. With only one British officer supervising, the Arab police made no attempt to prevent the massacre.

The head of Hebron’s Ashkenazi community, Rabbi Ya’akov Slonim, had been on good terms with his Arab colleagues and offered his home as a refuge to Hebron’s Jews, believing that they would be spared. But the mob broke in and killed the Rabbi, members of his family and all those assembled there.
[…]
In total, sixty-seven Jews were killed and 60 were wounded. The Jewish community in Hebron was destroyed.

Today, when it comes to Palestinian leaders inciting their followers to violence against Jews, not much has changed. As MEMRI reports, Hamas MP and spokesman Mushir Al-Masri, waving a knife, declared, “We must all join the Jerusalem Intifada.” And, to the cheering of crowds, proclaimed, “The knife is our choice. The knife symbolizes the battle of the West Bank and Jerusalem.” Watch the video by
clicking here.
Another MEMRI video, shows Sheikh Muhammad Sallah, “Abu Rajab,” delivering a sermon in Gaza Friday, brandishing a knife, and urging, “Form stabbing quads. We don’t want just a single stabber. Oh young men of the West Bank: Attack in threes and fours. Some should restrain the victim, while others attack him with axes and butcher knives.” Watch the video by clicking here.
Still another Gaza politician, Khaled Abu Hilal, leader of the Palestinian Freedom Movement, exhorted Palestinians to violence, asking, “Why not run over this Zionist in Germany, in Tunisia, in Egypt, or in Jordan? Why not throw stones and Molotov cocktails at him? Why not stab him in his heart?” Watch the video by clicking here.
It goes without saying that world leaders should, as Ambassador Prosor demanded, condemn this incitement. Similarly, the news media must cover it because without reporting on this incitement, any articles about events are incomplete, lacking in context, and journalistically unethical.

The silence of the media encourages ever more blatant incitement while serious media attention would help to diminish the hate-fomenting practices.