Get to know Yoni Michanie

Q: How did you get involved in campus activism? 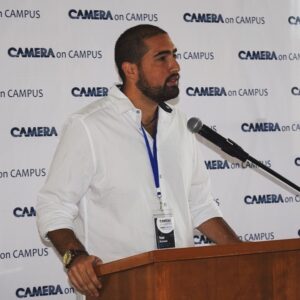 To be completely honest, I was never involved in campus activism as a student. As an undergraduate in Florida International University, a relatively apathetic campus, I was interested in finishing my undergraduate degree, as quickly as possible, and organizing my move to Israel. It’s an experience that I never had myself but one I have been able to re-live through the incredible work that our students have been doing.

Q: Tell us about the importance of defending Israel on campus and the sorts of things that students are experiencing.

There are two battles being waged on campuses. The first is the battle against America’s bipartisan support for Zionism. One of the fundamental strategies for anti-Israel activism on campus is to promote the premise that liberal and progressive values are incompatible with supporting Israel’s right to exist as a Jewish nation. The second battle, held dear to anti-Israel activists, is to wedge a gap between antisemitism and anti-Zionism. Contradicting the IHRA working definition of antisemitism, anti-Israel students on campus are waging a war against Jewish identity by trying to detach it from the Jewish people’s right to self-determination. The upshot of all this is that antisemitism is becoming normalized, and attacking Jewish self-determination seems to have been mainstreamed in academic institutions. That means, in short, our students are not just facing attacks on their identity by anti-Israel student activists, but by faculty members and administrators as well.

Students. I have always held the belief, as I have publicly said in conferences and speaking engagements, that the role of student activists is comparable with the work that my unit and I did during our service in the IDF — perhaps, even more important. While that may be a controversial statement to make, pro-Israel students are fighting against students, faculty members, and institutions to make their campus better for the next incoming generation. Their passion to defend the Jewish right to self-determination serves as a uniform, which no one asked them to put on. Their activism is genuine, grassroots, and intrinsic. There is nothing more beautiful and empowering than to read their courageous articles, statements, and testimonials. Above all else, these students show that one can love Israel, despite all her imperfections.

My great-grandfather fought with the Partisans against the Nazis during WWII. I would love the opportunity to spend a long evening hearing him offer details about that experience. I am sure, he would love to have heard about some of the experiences my father and I shared during our service in the IDF. I think he would have broken down in tears seeing his descendants wear a uniform and fight for the world’s only Jewish state. The same state that would prevent the tragic horrors of the Holocaust from being repeated.

Q: What are your next steps?

After a wonderful two and a half years with CAMERA, I will be pursuing my PhD in Political Science at Northeastern University. It has been a pleasure and privilege to be part of such an incredible and talented team. I look forward to continuing my work in the field through future lecture circuits and articles discussing the conflict and antisemitism through a variety of lenses.

I left Israel, temporarily, to share my experiences and knowledge with students in the US. With CAMERA, I have been able to lecture on nearly 50 campuses and have reached thousands of students. I am beyond grateful for this incredible organization and I feel at ease, knowing that our students have this critical resource for their activism on campus.