A “new consensus has emerged in the press, but perhaps especially at this paper: that truth isn’t a process of collective discovery, but an orthodoxy already known to an enlightened few whose job is to inform everyone else,” wrote Bari Weiss, a former New York Times Op-Ed writer and editor, in her scathing resignation letter earlier this month. “I was always taught that journalists were charged with writing the first rough draft of history. Now, history itself is one more ephemeral thing molded to fit the needs of a predetermined narrative.”

The shoehorning of events and factual information to fit a particular narrative, a prevalent phenomenon in advocacy journalism, was once again on display this week at “The Paper of Record.” This time it was the widely-embraced International Holocaust Remembrance Alliance Working Definition of Antisemitism which required a makeover so as to sit well with the required narrative.

“What we saw with Ken Marcus was a misuse of the office to further marginalize marginalized people,” said Liz King, the program director for education at the Leadership Conference on Civil and Human Rights, which joined dozens of groups in opposing Mr. Marcus’s confirmation.

“It is clear that he was never neutral,” Ms. King added. “Ken Marcus’s civil rights agenda was always his own, and students paid dearly for his time in office.”

Mr. Marcus, who was confirmed to lead the office in June 2018, is perhaps best known for resurrecting a complaint against Rutgers University, in which he unilaterally adopted a disputed definition of anti-Semitism that includes opposition to the state of Israel and asserted the department’s right to treat Judaism as a national origin. His decision to reopen the complaint, which had been dismissed by the Obama administration, caused an uproar among Palestinian rights and higher education groups, which had long fought Mr. Marcus’s efforts to squelch student calls for boycotting, divesting from and imposing sanctions on Israel. (Emphasis added.)

What is this “disputed definition of anti-Semitism” which Mr. Marcus had the audacity to allegedly “unilaterally adopt”? Did Marcus devise and adopt his own problematic definition of antisemitism to serve his personal partisan, non-neutral agenda, as The Times implies? Hardly. 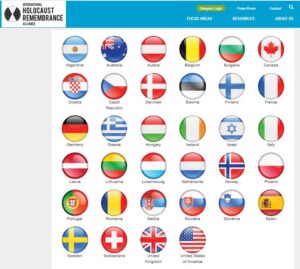 The member states of the IHRA

In fact, the definition in question was previously adopted by the U.S. Department of State under the Obama administration and has been praised by mainstream Jewish organizations like the American Jewish Committee and Anti-Defamation League. It is virtually identical to the working definition developed by the intergovernmental International Holocaust Remembrance Alliance, adopted by 26 countries and the European Union.

Green also falsely reports that the definition broadly includes “opposition to the state of Israel.” To the contrary, the definition explicitly states: “criticism of Israel similar to that leveled against any other country cannot be regarded as anti-Semitic.”

Regarding Israel, the definition includes only opposition which involves age-old antisemitic tropes used against Israel, which applies a discriminatory standard against Israel, or denies it the right to exist. Specifically, the definition details “Using the symbols and images associated with classic anti-Semitism to characterize Israel or Israelis,” “Drawing comparisons of contemporary Israeli policy to that of the Nazis,” “Blaming Israel for all inter-religious or political tensions,” “Applying double standards by requiring of it behavior not expected or demanded of any other democratic nation,” “Multilateral organizations focusing on Israel only for peace or human rights investigations,” and “Denying the Jewish people their right to self-determination, and denying Israel the right to exist.”

Thus, opposition to Israel, for example, on the basis of plans to extend sovereignty over the Green Line, or for its communities in disputed areas, for corruption, for its relationship to the United States or anywhere else, for its human rights record if the standards by which it is judged are applied consistently compared to other countries, or for any number of other reasons, are all within bounds. That is, much criticism of Israel is not included in the definition adopted by the Education Department, and before that, the U.S. Department of State.

But the truth about the definition’s contents, origins and backers undermine the desired narrative, so they must be massaged to conform the predetermined template, or as Weiss succinctly put it: ” the numbing process of making it ideologically kosher.”