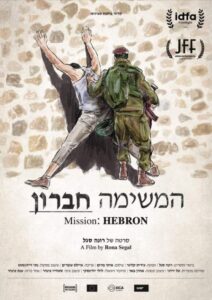 The film portrays Israel’s military presence in Hebron as inherently evil, meant to support and protect an equally evil foreign implant of Jews (referred to as “settlers”) in a “Palestinian city.” It’s marketed  as a unique exposé of Israeli brutality against Palestinians based on the supposedly reluctant testimonies of those who served military time in Hebron.  The filmmaker suggests  “it was not easy” for the soldiers to tell their “off-the-radar” stories that offer viewers “a genuine perspective on a very complex conflict.”

But far from neophyte whistleblowers reluctantly divulging tales of Israeli abuse they witnessed, the protagonists/interviewees are actually seasoned employees, former employees, and activists with Breaking the Silence (BtS) (or Peace Now, a funder of BtS) whose mission and goal is to slander Israel in the international public arena with hearsay and uncorroborated stories of villainy.  The film credits footage that accompanies these testimonies to such sources as the International Solidarity Movement, that infamously supports deadly terrorist attacks against Israeli Jews; anti-Israel activist/propagandist Issa Amro and his Youth Against Settlements; the anti-Zionist group B’tselem that notoriously echoes Nazi propaganda to promote the concept of Jewish supremacy, and other activist groups affiliated with BtS that labor to defame and delegitimize Israel. Who knows the actual context of the film clips and how they were edited and manipulated (with added sound effects) to fit the filmmaker’s pre-existing narrative?

In fact, the film reflects a BtS campaign that ties Israeli military wrongdoing to settler violence, which it claims is rampant and rising. The group announced its role in the film that was “based” on interviews with their own “witnesses.” Indeed, the documentary would more aptly be titled “Breaking the Silence: The Movie.”

What is Breaking the Silence (BtS)?

Breaking the Silence (Shovrim Shtika), is a European-funded Israeli NGO established in 2004 to sully Israel’s international reputation by peddling anonymous tales of IDF wrongdoing. Rather than report alleged incidents of military misconduct to the proper authorities, the group hides behind a cloak of anonymity, withholding the identities of those involved, and the specifics that would enable authorities to corroborate their testimonies — despite the army’s injunction to report any violation of regulations that results in harm to non-combatants.

The group readily admits its goal is “not to improve” the Israeli military “or make it more humane” but “to end the occupation” of disputed territory that it considers Palestinian. Its message is therefore “not aimed at army commanders and soldiers” but at the general public. Its declared mission is to promote the idea that “supporting Israel entails supporting the occupation and the settlements.”

In other words, BtS is a propaganda group dedicated to destroying Israel’s support both inside the country and abroad.  Their “testimony” is best described in Hebrew as “Lashon Hara” — spiteful gossip and slander. Fact-checking investigations by even sympathetic journalists have shown that many or most BtS claims are either entirely false or grossly exaggerated. That is the nature of propaganda. Responsible journalists would therefore be well-advised therefore to accept tales by BtS “witnesses” with the utmost of caution.

Who Are the Film’s Interviewees?

Despite the filmmaker’s attempt to disguise the interviewees as awkward and inexperienced – they are filmed timidly asking whether they are sitting correctly or whether they should start talking, etc. — most are, or have been, on BtS’ payroll and are extremely well versed in slandering Israel in public and in filmed interviews.

Ron Zeidel is the primary interviewee who explains and introduces the various concepts of the film. He is introduced as a battalion commander and sniper sergeant who spent two periods in Hebron.

What the film conceals is that Zeidel is also Deputy Director and Chief Research Officer for BtS.  That he was exposed by Israeli NGO “Ad Kan” for trying to solicit classified information about IDF operations in Syria, unrelated to Israel’s military presence in the disputed territories, suggests that BtS’ real mission extends beyond ending Israel’s alleged “occupation” to compromise and bring down the Israel Defense Forces (IDF) in general.

Dean Issacharoff is identified as an officer in the Nahal Brigade’s 932 Battalion who served in Hebron.

What the film does not mention is that he was a staffer for BtS, serving as its spokesperson and leading BtS tours of Hebron, before taking a job as spokesperson for Arab MK Ayman Odeh. Upon leaving BtS, Issacharoff conveyed his hopes for BtS to become a “leading organization” and urged more Israelis to publicize misdeeds by soldiers.

Nadav Bigelman is identified as having served in the 50th Battalion in Hebron and Rantis.

What the film hides is that Bigelman was on BtS staff for nearly six years, as a spokesman, “education facilitator” and “researcher” before taking a job as a community organizer in a similar group.

Nitzan Ron is identified as a soldier with the 50th Battalion who served in Hebron during the summer of 2016.

What the film avoids referring to that Ron is employed as “Director of Activities” by Peace Now (a BtS funder) to stir up hostility against Israel’s military and settler presence in the West Bank.

Louis Averbuch and Yonatan Stearman both entered the IDF as new immigrants. They are identified in the film by the battalions they served in and the length of their service in Hebron.

What the film neglects to say is that they are part of a new BtS campaign to connect IDF misdeeds with the idea of “settler violence” which the campaign claims is rampant, which are also the ideas they promote in this film.

The narrative/framework of the film promotes the same claims and concepts as the BtS campaign. Hebron is portrayed as a Palestinian city in which a small contingent of Jewish interlopers – “settlers” – have established themselves with the endorsement and help of the Israeli government. The message conveyed by the film through the interviews, film clips, and sound effects is that the Israeli military maintains direct control of a central area of the Palestinian city, where soldiers — in cahoots with “settlers”— brutalize, and threaten Palestinians going about their day-to-day lives, in order to exert power and control over the Palestinians.

The script breaks down BtS allegations of IDF soldiers abusing Palestinian victims into 10 separate categories which include patrols, arrests, and coordination with settlers.

The nature of the testimony – like all BtS testimony — makes it difficult, if not impossible, to corroborate or disprove. This is because details are kept deliberately general and vague — dates, times, specific locations, names or identities of the individuals who are allegedly involved are obscured in order to prevent fact-checkers from debunking the stories.

The professional tale bearers of the film thus speak in broad generalities, with language calculated to provoke:  The Israeli army “sterilizes” areas of Hebron from Palestinians; soldiers randomly target hapless Palestinians for stop, search and frisk just to intimidate and make them “keep their heads low”;  soldiers set up “checkpoints” and demand ID card from Palestinians “to cause a sense of persecution”; they randomly blindfold, handcuff and cart off Palestinians, including children 10-years-old or younger without any idea of why these victims are being apprehended; similarly, soldiers enter Palestinian homes in the middle of the night, yelling, banging on the door with the rifle butt, turning everything upside down, breaking things, breaking walls, making a mess, without any clue to what they’re searching for.

As the film continues, the testimonies become more and more sensational and far-fetched: Soldiers look forward to the “fun” of shooting Palestinians with rubber bullets, treating it like a sport, celebrated with “high-fives” whenever a target is “hit” and writhing in pain; settlers offer soldiers pizza for shooting Palestinians;   to accommodate “settler’s events”,  soldiers “kick out all the Palestinians” from the commercial area, “closing all the stores” there and depriving them of their livelihoods; settler children and adults alike curse, spit at and attack Palestinians — throwing stones into the Arab market in Hebron, pepper spraying or physically assaulting Palestinians walking in the street, throwing bottles at Palestinian homes but “there’s no such thing as stopping a Jew from doing anything in Hebron”; the settler security coordinator hates and curses Arabs and gives orders to the soldiers, overriding any benevolence or allowances to the Palestinian residents.

While it is impossible to rule out that any specific incident of wrongdoing may have occurred at some point in time,  or that any individual soldier may have abused someone in contravention of army regulations, it strains credibility to think that these are routine occurrences carried out by the vast majority of soldiers and settlers, as the testimonies suggest. Indeed, had any of the interviewees filmed actually witnessed what they claim, they would have been obligated to report it to their superiors and ensure that those involved be subject to court martial.  But, as was mentioned above, that is not part of the BtS campaign.  Its mission is to delegitimize the IDF in general and to demonize the Jewish presence  Hebron and in the West Bank as illegitimate, dangerous and evil.

To that end, the BtS campaign and the film must necessarily conceal the essential context of and truth about the military presence and Jewish community in Hebron.

What Else Does the Film Conceal?

(For more details, see Unesco and The  Jewish Legacy in Hebron)

Far from advocating the sharing of a site and city that is holy to both Jews and Muslims, the BtS campaign and goal, which is reflected in the film, is to turn the area over to the Palestinians and strip it of its Jewish legacy and history through the demonization and delegitimization of Hebron’s Jewish residents and the soldiers who ensure the holy site and area are equitably shared.

Mission: Hebron  is not a documentary as much as it is part of the BtS propaganda campaign against  the rights of Jews in the land of their forefathers.