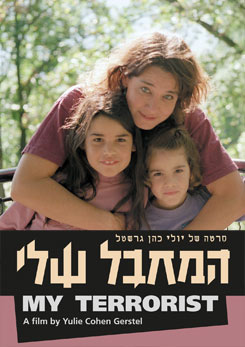 “My Terrorist” by Yulie Cohen Gerstel chronicles the personal journey of the filmmaker from victim of a terrorist attack to advocate for the jailed perpetrator. Gerstel was a 22-year-old El Al flight attendant when the airline’s bus was attacked in London by two members of the Palestinian terrorist group PFLP on August 20, 1978. While Gerstel escaped relatively unscathed, her arm grazed by a bullet, her fellow flight attendants were not as lucky. Irit Gidron was killed and Yehudit Arnon suffered a severe head wound. More than 20 years later, Gerstel petitions the parole board to release Fahad Mihyi, the surviving terrorist who is serving four concurrent life sentences in Britain’s Dartmoor prison.

Her campaign to free Mihyi serves as the vehicle for Gerstel to promote the political agenda she shares with her mentor, Ha’aretz columnist Gideon Levy who also appears in the film. They believe that Palestinians should not be blamed for any action, no matter how heinous. Indicative of Levy’s extreme bias was his refusal to criticize even the brutal lynching of two Israeli reservists by a Palestinian crowd in Ramallah on October 12, 2000. Israeli pundit Nahum Barnea of Yediot Achronot described Levy as having flunked the “lynch test.”

In one scene, Levy asserts that “even if Saddam launches missiles [at Israel], we have committed such atrocities for 35 years… I cannot bear to hear Israelis talk about themselves as victims.” Gerstel agrees. In her view, it is the perpetrators of terrorist attacks, rather than their targets, who are the real victims. She therefore declares Mihyi “a victim, more of a victim than I am.”

In an August 2003 interview with Satya magazine (after the film’s release) she again emphasized this position:

I don’t think that Israel, as a very strong state, is a victim. I think we tend to victimize ourselves, and we use it to be more aggressive and we — Americans and Israelis — aren’t really looking for solutions, but to control other people’s lives somehow.

Gerstel describes her supposed transformation from a staunch Zionist to a critic of Israel and characterizes her campaign of reconciliation with Mihyi as a courageous moral awakening sparked by Israel’s hostilities in Lebanon. She claims that Israel’s military operation against the PLO in 1982 made her realize that Israel has always been the real aggressor and the Palestinians the ultimate victims. Underscoring this message, the film includes a shocking clip of a dead Palestinian being exhumed after the1982 Sabra and Shatila massacre in Lebanon. But Gerstel is careful to avoid showing any outright Palestinian —lence— there are remarkably no graphic images of the victims or carnage of the PLO terrorist attack that forms the backdrop of the film’s story. .

One of the most grating aspects of the film is Gerstel’s smug self-righteousness as she advocates for Mihyi. After all, Gerstel sustained no major injury in her brush with terrorism, while others were left bereaved or seriously wounded.. It is troubling that while she makes an overt display of benevolence toward the terrorist, Gerstel completely disregards the pain and emotions of the real victims of the 1978 attack. In fact, there is nothing at all about the reactions of Yehudith Arnon’s family or the still-grieving mother of the murdered Irit Gidron. The focus is instead on Gerstel herself as she reads a letter she wrote to Gidron’s mother for the first time in 23 years since the attack, claiming that only after communicating with Mihyi was she able to overcome the trauma that restrained her from writing. One is left wondering if it merely coincidence that she wrote at the same time she was making the film.

Gerstel is also shown speaking to Yaffa Elharar, whose 16-year-old daughter, Maya, was murdered in a 1994 suicide bombing in Afula, Israel The camera focuses on Gerstel’s expression of concern as she listens to Elharar’s plea not pursue a campaign which “will only encourage and reinforce terrorism.” It is a plea Gerstel rejects. She indicates that terrorists themselves are not to blame, saying a terrorist arises from “…a man whose house was demolished, the poverty, the children, the disgrace.”

Mihyi himself is never seen on film. Gerstel reads a letter she claims he wrote expressing remorse for his past actions. She says she “respects his wishes” not to be shown. Notably, an October 1, 2005 article in The Sun reported that “prison officers claim Mihyi hooted with joy as he watched the 9/11 outrage on TV in his cell.” (The article also reported that Mihyi is allowed out of prison daily to earn money as a butcher at a Muslim shop in London.)

Gerstel promotes her radical anti-Israel agenda throughout the film. For example, she asserts that Ariel Sharon’s visit to the Temple Mount on September 29, 2000, “is how Israel started yet another war” and predicts, “Now we’ll go into the occupied territories and we’ll kill children.” She also declares her “hope [that this] is the Palestinian Independence War.”

It is hardly surprising that the film was embraced by those who promote the same message. Notably missing from the laudatory reviews of “My Terrorist” is acknowledgement of the anguish caused by the film to Irit Gidron’s mother, and other families who have been similarly victimized by terrorism. While “My Terrorist” is touted by some as a film that promotes reconciliation and forgiveness, the historical misrepresentations and disregard for Israeli terror victims suggest the film is more about promoting a radical political agenda.