NBC has corrected an erroneous reference to 3400-year-old pottery originating from “Palestine.”

“Lost golden city of Luxor,” a fascinating segment about a recently discovered ancient city in Egypt which aired in the April 9 broadcast of “News with Shepard Smith” erred : “There has never been this much pottery discovered at one site — and it comes from all over Syria and Palestine, the artifacts museum ready.” Of course, the region of Canaan, as it was known at the time, did not take on the name “Palestine” until more than 1500 years later,  when the Romans named Judea “Palestina” in 135 CE, after the Jews’ ancient enemy. (The kingdoms of Israel and Judea arose in the early Bronze Age, around 1000 BCE). 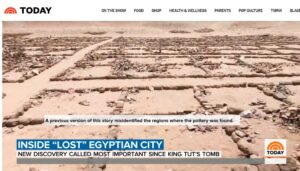