Yehudit Karp, a former deputy attorney general of Israel and today a member of the public council of the New Israel Fund, Yesh Din and Friends of Breaking the Silence, is no doubt well aware of the numerous cases in which Israel’s High Court ruled in favor of Palestinian rights. Why, then, does she dismiss this meaningful record of on-the-ground impact as mere window-dressing? 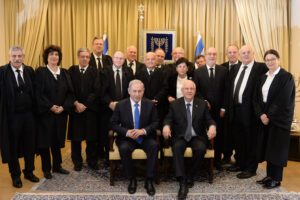 In her April 5 Haaretz Op-Ed (“If the International Criminal Court Lacks Jurisdiction, Is Everything Legal?”), she writes: “Some cite the ICC constitution, which says that even if something is within the court’s jurisdiction, the court is not supposed to investigate a matter that has already been properly investigated by a local court.”

But she  goes on to reject that argument, claiming:

… while Israel takes pride in the fact that the High Court has opened its doors to hear complaints of Palestinians from the territories about violations of their rights, this is just for appearances’ sake. In actuality, the court does not impose its authority on the government and require it to properly protect the local population, which under international law is a protected population – i.e., entitled to special protection.

Just for appearance’s sake? Israel’s High Court is incapable of imposing its authority on the government and make it protect, as needed, the local Palestinian population? Karp is most certainly familiar with the following High Court’s rulings in the favor of Palestinian rights: annullment of the “regularization bill,” which would have enabled the sweeping legalization of illegal Israeli construction in the West Bank settlements; overturning the “neighbor procedure,” in which Israeli soldiers were escorted by a suspect’s neighbor tasked with informing the arrestee of possible harm; rerouting the separation fence; preventing the demolition of terrorists’ houses; outlawed the routine practice of coercive investigation methods;  stopped the arrest of terror suspects without judicial review; nullified the procedure that authorized the Prisons Service to prevent a terror suspect from meeting with his attorney; cancelled the denial measure which enabled the army and police to block Palestinian farmers from access to their agricultural land; ordered the state to dismantle a concrete wall on the side of a road, built for protection against shooting ambushes; and countless other “impositions of authority” by the Supreme Court on the state and its security forces, protecting the human rights of the Palestinian population.

This article first appeared in Hebrew at CAMERA’s Presspectiva. Translated from Hebrew by Shlomi Ben Meir.