A New York Post news story Monday on the AIPAC Policy Conference erred on several points about the powerful pro-Israel organization. In her March 2 article (“Mike Bloomberg slams ‘dead wrong’ Bernie Sanders at AIPAC,” Ebony Bowden incorrectly reported that in recent years Democrats boycotted the conference, failing to qualify that some Democrats have boycotted. Indeed, many more have participated. The article errs:

The bipartisan event frequented by both Republicans and Democrats was once an unmissable stop for presidential candidates, but has been boycotted by Democrats in recent years as progressives in the party, including Rep. Ilan Omar (D-Minn.), have accused it of being too right-wing.

AIPAC’s policy is to invite presidential candidates only on election years. In the last election year, 2016, Bernie Sanders did not attend, while Hillary Clinton did. About the 2016 conference, The Washington Post reported at the time:

Clinton’s chief Democratic rival, Senator Bernie Sanders of Vermont, was the only major candidate who skipped the AIPAC meeting. 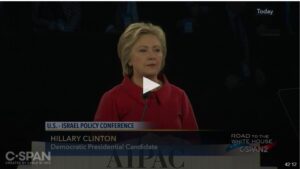 As for Democratic Congressmen in attendance, given that more than two-thirds of Congress attend the annual event, there are likely hundreds of Democratic Senators and Representatives in attendance on an annual basis.
In a separate error, the article misrepresents Ilhan Omar’s criticism of AIPAC as “being too right-wing.” In fact, her criticism was that US support for Israel was “all about the Benjamins baby,” invoking an antisemitic trope that U.S. support for Israel is financially motivated and not spurred by common interests.
Indeed, the article’s hyperlink over the phrase “too right-wing” is to a New York Post opinion by Michael Goodwin which does not substantiate the mischaracterization of Omar’s anti-AIPAC criticism. Goodwin’s piece notes the antisemitic nature of Omar’s anti-AIPAC barbs, citing “The vile tweets of Minnesota Rep. Ilhan Omar about Jews, money and dual loyalty.” (See also “Pelosi, Top Dems condemn Rep. Ilhan Omar over ‘anti-Semitic’ tweets.”)
Finally, Bowden’s article states that both Sen. Amy Klobuchar and Pete Buttigieg “flip-flopped on their decisions to skip the conference — with Klobuchar eventually appearing via video on Sunday.” But Buttigieg also appeared via video, as did Joe Biden, whom the article completely omits.
CAMERA has contacted Post editors about these misrepresentations. Stay tuned for an update about corrections.
Donate Now