After contact from CAMERA, The Washington Post deleted an offensive image that implied a connection between Jews and the coronavirus.

The Post’s Feb. 25, 2020 story, “The latest target of racist rumors about coronavirus: The ubiquitous dance troupe Shen Yun,” was initially accompanied by a picture of a visibly Jewish man. 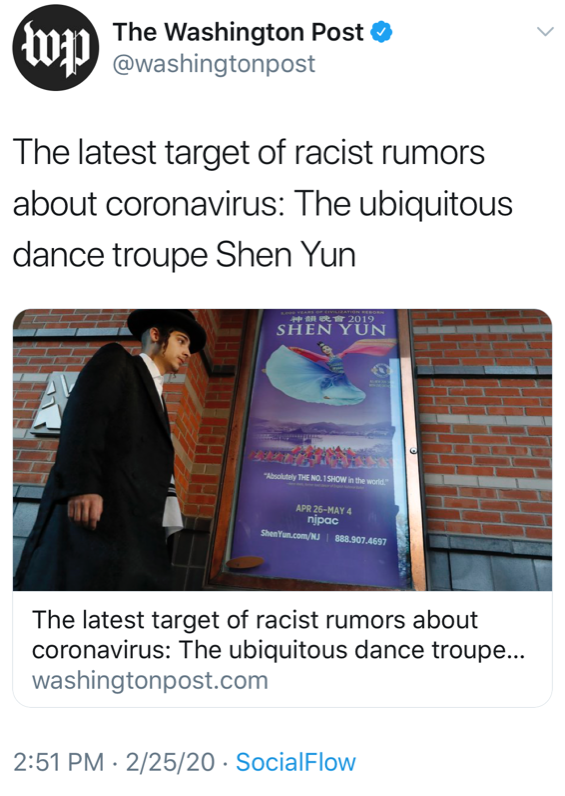 The Post’s Twitter account also shared the article. The picture, taken from Kathy Wilkens of the Associated Press, appears in the dispatch along with a description stating “an Orthodox Jewish man passes a poster advertising Shen Yun as he walks to the New Jersey Center for the Performing Arts on April 24, 2019, in Newark.”

But as CAMERA pointed out to Post staff, depictions of Jews spreading diseases are a staple of antisemitic propaganda and have appeared throughout history, often resulting in anti-Jewish violence and discrimination. Indeed, as a Feb. 7, 2020 Times of Israel report noted: “The spread of and fear generated by the coronavirus has led extremists to promote conspiracy theories and share their anti-Semitic views, the Anti-Defamation League said.”

Following contact from CAMERA, The Post quickly and commendably chose a different picture to accompany their report.