CAMERA’s Israel office today prompted corrected of the fallacious assertion in an Op-Ed by Gideon Levy that an Israeli army tractor slammed into a crowd of protesters during a demonstration last week in the West Bank village of Kafr Qaddum. The Feb. 22 column in Haaretz‘s English edition (“The IDF Spirit: These Aren’t Human Beings. They’re Palestinians“) had stated:

It’s hard to think of an image that better reflects the situation than this vehicle of steel heading wildly down the streets of a Palestinian village, slamming into a crowd that tries to flee for its life. (Emphasis added.) 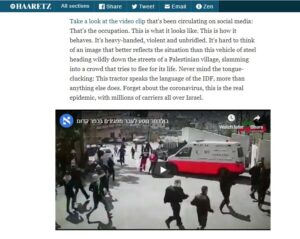 In fact, the video in question does not show the military vehicle slamming into the crowd, and indeed the frontloader did not slam into a crowd as it set out to clear away the boulders that residents had placed in the road. The crowd had gathered in an effort to prevent the vehicle from clearing the road.
As reported Feb. 21 by Hagar Shezaf:

A video published Friday shows an Israeli army bulldozer [sic] driving at a high speed and pushing large rocks towards Palestinian protesters in the West Bank village of Kafr Qaddum, hitting one of the protesters with a stone. . . .

The bulldozer [sic] stopped when a man was hit by one of the stones. The rocks continued tumbling towards protesters at the bottom of the street, and nearly hit a child.

The Palestinian hit by the stone was evacuated to a Qaliqilyah hospital by the Red Crescent.

Notably, the Hebrew version of Levy’s column does not claim that the vehicle “slamm[ed] into a crowd.” Rather it refers to the vehicle “barreling [literally galloping] towards a crowd.” (CAMERA’s translation.)
In response to communication from CAMERA, editors marginally improved the language in the digital article, which currently refers to the tractor “driving headlong into the crowd.” While readers could easily conclude from this unclear formulation that the vehicle hit and injured demonstrators, a forthright correction appended at the bottom of the article dispels that misconception. It states:

This article was amended on 25.2.20, to reflect that the military vehicle in question did not hit any Palestinian protesters. Several, however, were injured by the boulders that the vehicle pushed toward them at great speed.

The correction, however, introduces a new apparent error regarding the number of injured. While the Israeli army and Haaretz‘s coverage by Hagar Shezaf stated that one was injured in the incident, Palestinian sources claimed two were injured, a nine-year-old boy and a journalist for Palestine TV.  CAMERA has asked Haaretz editors to cited the basis for the assertion that “several” were injured, a claim which contradicts the media outlet’s own coverage.
See also “Haaretz, Lost in Translation”

Due to a translation error, an article by Gideon Levy ("This is the IDF," February 23) incorrectly asserted that an IDF tractor slammed into a crowd of Palestinian protesters. Rather, the vehicle drove headlong toward the crowd, pushing large boulders toward them at great speed.