The New York Times is known to have an Israel problem.  Its bias is not confined to its editorial and Op-Ed pages. It manifests itself in many ways – including inappropriate editorializing in news stories, double standards, and distorted news coverage.  The Times Jerusalem bureau chief  and Op-Ed columnists do not even bother to hide their animus toward Israel. .

No surprise then that the Times‘ annual “Year in Pictures” feature, published in the Sunday “Week in Review” print edition, included no photographs of the Arab riots that ensued as a result of Israel’s rededication of the Hurva synagogue in Jerusalem’s Jewish Quarter 62 years after it was destroyed by Jordanian forces, or photographs of Palestinian Authority leader Mahmoud Abbas declaring that he would never recognize Israel as a Jewish state, nor any of Hamas leader Ismail Haniyeh at a Gaza rally proclaiming Palestinians would never recognize Israel and that all of Israel belongs to Palestine.
Instead, there were three photos of Israel with captions distorted to fit the New York Times’ apparent editorial policy of consistently blaming Israel in the Arab-Israeli conflict, while concealing aggression against the Jewish state.  The largest photograph was of a relatively minor skirmish in Umm El Fahm, certainly not one newsworthy as a picture of the year. Moreover, the large Getty photograph by Uriel Sinai, featured on page 10 in “Week in Review” misrepresented the events depicted by completely ignoring the role of the Arab participants. 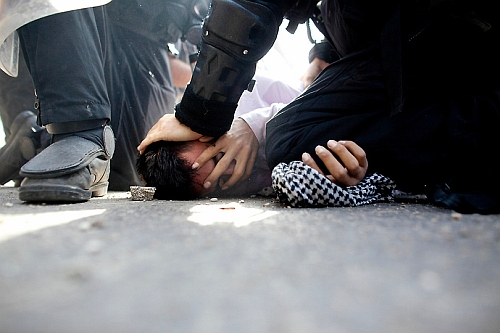 What did the Times omit?

*There was no mention of the fact that the nationalist Jewish demonstration was against the extremism of that town’s cleric and his radical movement, which incites against Jewish rights.

The clear implication was that the Arab youth was an innocent victim of Israeli police in cahoots with ultranationalist Jews encroaching on Arab territory. What was the real story?

On October 27, 2010, police arrested nine Arabs in Umm el Fahm for hurling rocks at Jewish demonstrators and police. Hundreds of Arab men in that town began rioting – throwing rocks and burning tires – after nationalist Jews, followers of the late Rabbi Meir Kahane, commemorated his assassination by demonstrating against Umm el Fahm resident Ra’ed Salah and his Islamic Movement. Salah a radical Islamic leader, rejects Jewish ties to Jerusalem  and has repeatedly incited his people against Jews exercising their religious rights in their holy city.

For more about the events in Umm el Fahm, see here and here.

Two other small photos pertaining to Israel were included in the “Year in Pictures” feature, both of which similarly included misleading captions that misrepresented events regarding the Gaza flotilla in June 2010. They were:

Uriel Sinai, Getty images: “Activists from the aid flotilla at Ben Gurion Airport in Tel Aviv before returning to Turkey.”

What was misrepresented or omitted?

The flotilla was on a “humanitarian” mission to bring “aid” to Gaza.

Even those who spearheaded the mission insisted that this was not the case. Organizer and anti-Israel activist Greta Berlin publicly declared that the goal of the flotilla was not “delivering humanitarian supplies,” but about ending Israel’s blockade in order to allow unfettered shipments to the Hamas-ruled territory. Had this indeed been “humanitarian aid,” surely the Hamas government and activists would be eager to have it delivered. This was not the case. The flotilla participants rejected Israel’s repeated offers to deliver their cargo at a nearby Israeli port, after which the supplies, minus cement and other proscribed goods, would be transferred to the Gaza Strip. Moreover, Hamas itself rejected the transfer of the cargo to Gaza after inspection by Israel.
Moreover, when the contents of the flotilla were eventually removed and catalogued it turned out nothing on the main ship, the Mavi Marmara was of a humanitarian nature, and much of the other material on other vessels was outdated and useless.

The main organizers of the trip were the Turkish Insani Yardim Vakfi (IHH), which has worked closely with terrorist organizations, and the Free Gaza Movement, which is strongly linked to the extremist International Solidarity Movement (ISM).

IHH, which has recruited soldiers for war and delivered arms to fighters, also works closely with the Hamas terror organization. Researchers have cited links between the group and Al Qaida and charged the group with involvement in a failed plot to bomb the Los Angeles International Airport. As MEMRI has documented, many of the participants — from Egypt, Jordan, Yemen — were members of the Muslim Brotherhood and numerous had declared their desire for martyrdom.

Nine people aboard the Mavi Marmara were killed as a result of the violent activities on board that ship. Video footage clearly shows Israeli soldiers landing on the ship being immediately and violently set upon by gangs of passengers awating them on deck. The attack on the Israeli soldiers began, as retired British Marine Officer Peter Cook acknowledged on British television, while the first Israeli soldier still had both of his hands on the rope being used to lower him onto the ship. The footage, and pictures that were released by the IHH, show, among other acts of violence, a passenger stabbing an Israeli soldier, gangs of passengers pummelling soldiers with metal rods and other objects, and a soldier being thrown off a high deck. Testimony from both Israeli soldiers and activist passengers describes pistols being taken from injured soldiers. The ship’s captain reportedly told Israeli soldiers that the violent passengers threw their guns overboard before the ship was completely taken over.

To read more about the issue, see The Latest Video Clips – Gaza Flotilla Incident  and Gaza “Freedom Flotilla”.
But what do New York Times editors care about the accuracy of the captions on the pictures when their distorted agenda takes precedence over the commitment to presenting a true picture of events? It has simply become clear that readers cannot depend on the New York Times to provide accurate and full information about events in the Middle East
Donate Now