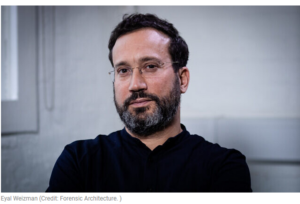 NGO Monitor, an organization that monitors non-governmental groups active in the Israeli-Palestinian conflict, shows how “Forensic Architecture is a pseudo-research project that consistently generates analyses that are inaccurate, misleading, and blatantly prejudiced.”

FA’s donors include the Open Society Foundations [OSF] which is a creature of billionaire financier and philanthropist George Soros who has frequently backed anti-Israel causes and organizations.

Excerpts from The House is on Fire:

It’s a stressful time for Weizman, the founder of Forensic Architecture [FA] … which has become well known in the art world for data-driven museum exhibitions that serve as detailed investigations into human atrocities that history has tended to ignore … [FA and] Decolonize This Place [DTP] … recognize common cause across a host of issues, including police brutality, Indigenous rights, income inequality and gentrification.

Both groups have also stoked controversy among their ideological opponents, most recently pro-Israel activists, who have said their [FA and DTP] support of Palestine has helped contribute to antisemitic violence, an accusation that [both] vehemently deny. In the same way that Safariland tear gas can be used in Palestine, Ferguson, Baltimore, Egypt and at the southern border of the United States, or that ultranationalism and self-victimization have global reach, this new fusion of art and human rights work crosses borders of geography and identity …

Inequalities are visible everywhere we go in the modern world. It’s the West Bank security wall; it’s which neighborhood gets a beautiful new park and which one gets the petrochemical plant. Weizman, 51, who is Jewish and grew up in Haifa, Israel, has written at length about the ways in which the structures of power and politics manifest themselves. ”Israeli apartheid is evident in everything in the built environment, from the way the city is organized to the way that communities are clustering, in where roads go and where forests are being planted. It’s in where new settlements are being established…”

In 2002, Weizman was asked, along with his partner in his Tel Aviv practice, Rafi Segal, to represent Israel at the World Congress of Architecture in Berlin. But their project, which examined in detail the spatial form of Israeli settlements in the West Bank and how their physical layout is informed by politics, was abruptly withdrawn by the Israel Association of United Architects. That widely reported censorship created an immediate buzz, and the work was exhibited instead at New York’s Storefront for Art and Architecture in 2003. In 2004, Weizman co-curated with Anselm Franke an exhibition called ”Territories,” which focused on spatial warfare — the way in which dominion is built into the construction and destruction of the landscape, housing and infrastructure…

• Apparently aiming to vilify Israel and the United States, the author evokes woke protestors: “Safariland tear gas can be used in Palestine, Ferguson, Baltimore, Egypt and at the southern border of the United States …” So what is the author saying here? “Safariland” is the name of a maker of tear gas used by governments (U.S. included) to clear violent protestors (or rioters) and, as such, it is possibly used by Israeli authorities.

Since there doesn’t exist an internationally recognized entity known as “Palestine,” the use of the term to refer to the disputed territory known as the West Bank and/or Gaza Strip is erroneous as has been acknowledged by various entities including news services such as Reuters: “We are deleting a previous tweet that incorrectly referred to ‘Palestine.’” Furthermore, the term “Palestine” is typically the term used by anti-Israel groups.

• The author quotes Weizman, ”Israeli apartheid is evident in everything in the built environment … It’s in where new [Jewish] settlements are being established.” This is a libel. The canard that Israel is an apartheid state is an assault on the country’s very legitimacy. South Africa’s racist, apartheid regime was rightfully dismantled, and this campaign seeks absurdly to cast Israel — the Middle East’s most progressive state and only liberal democracy — as being guilty of similar policies and equally deserving to be dismantled. Obviously, Jewish towns in the disputed West Bank (part of ancient Israel) needed to adopt safety measures for protection from violent attacks from Palestinian terrorists. Furthermore, the assertion “settlements are being established” is a falsehood since only one new Israeli settlement, Amichai, has been constructed in more than two decades.

• The author writes, “In 2004, Weizman co-curated with Anselm Franke an exhibition called ‘Territories,’ which focused on spatial warfare …” This exhibition, according to its organizers, was intended to “bring together architects and artists in an exhibition about politics, architecture and geography.” ‘Territories’ refer to those of the Palestinians. The exhibition constituted an anti-Israel extravaganza.

This O’Grady September Style piece (pages 90 though 98 in the print edition) is more a polemic than anything else. O’Grady justifies it here with statements like this: “Activism has become a powerful force in contemporary art of late — exciting, resonant, even potentially reparative in nature.”

The piece is not a departure from previous Style pieces. A recent example, The Rise of Palestinian Food; Food Matters (February 2020), states: “How to speak of the cuisine, given the political context? Alongside recipes, must there be testimony to the daily tolls of life under Israel’s occupation of the West Bank and its blockade of Gaza, the bulldozing of Palestinian homes and the uprooting of hundreds of thousands of local olive trees over the past half century?” This wording could have been lifted from standard Palestinian propaganda.

Has the magazine bashed other countries as it has Israel — including those with “occupation” reputations such as China/Tibet or Turkey/Cyprus or Russia/Crimea? An online search going back 10 years (including use of a professional journalism database) fails to find the kind of bashing used against Israel. The closest to it is several isolated mentions of “apartheid South Africa” and a mention of “Soviet occupation.”

So as a molder of public opinion, the Times again has provided a disservice to the causes of truth, peace and justice.