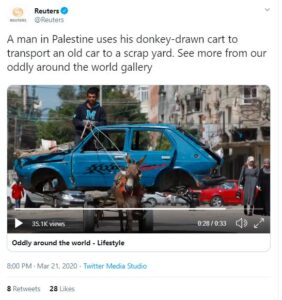 CAMERA’s Israel office today prompted a Reuters correction of a tweet from yesterday which inaccurately referred to the Gaza Strip as “Palestine.” Contrary to Reuters practice, the March 21 tweet had stated: “A man in Palestine uses his donkey-drawn cart to transport an old car to a scrap yard. See more from our oddly around the world gallery.”

Reuters, along with numerous other media outlets such The New York Post, National Geographic, The Los Angeles Times, and Voice of America, among others, has previously corrected this identical error, including in Arabic.

Reuters’ original caption for the photo had accurately stated:

A Palestinian man rides a donkey-drawn cart transporting an old car to a scrap yard, in Gaza City March 15, 2020. REUTERS/Mohammed Salem TPX IMAGES OF THE DAY

CORRECTION: A Palestinian man rides a donkey-drawn cart transporting an old car in Gaza City. We are deleting a previous tweet that incorrectly referred to Palestine. 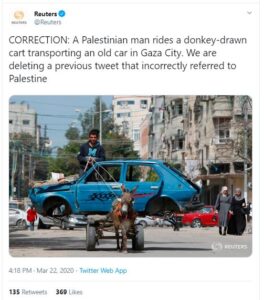