CAMERA has prompted correction of a New York Times article which overstated the number of violent incidents allegedly carried out by Israeli citizens targeting Palestinians. According to yesterday’s Times article, the Israeli NGO “Yesh Din reported in December that of more than 1,200 investigations of violence allegedly carried out by Jewish Israeli citizens against Palestinian civilians since 2005, only 8 percent had led to indictments” (“Israeli settler gets life terms in ’15 bombing of Palestinians,” page A10 and online here).

But the 1,293 cases that Yesh Din examined do not include only “investigations of violence,” contrary to the article’s claim. Yesh Din’s report, hyperlinked in Adam Rasgon’s Times online article, states:

Of the 1,293 files monitored by Yesh Din since 2005, 36% concern violent offenses perpetrated by Israeli citizens against Palestinians, including threats, stone-throwing, assault and use of firearms; 46% of the files concern property offenses, including arson, theft, harm to crops and vandalism; 14% of the files concern cases in which Israeli citizens attempted to take over Palestinian land, by means of fencing off land, erecting structures or denying access; 4% of the cases concern other offenses, which do not fall under any of the other three categories, including killing or harming livestock, desecrating mosques and more. 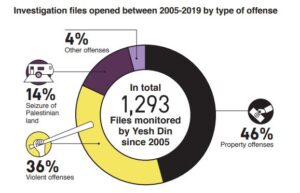 Thus, of the 1,293 investigations over some 15 years, less than 470 involved violence. Yesh Din’s report provides a clear graph (page 3) showing the breakdown of cases according to their nature, such as violence, property damage, and land seizure.
In response to communication from CAMERA, editors commendably amended the online passage, which now accurately reflects Yesh Din’s findings. The amended text reports:

Yesh Dinreportedin December that of more than 1,200 investigations of violence, property crime, seizure of Palestinian land and other offenses allegedly carried out by Israeli citizens against Palestinian civilians since 2005, only 8 percent had led to indictments.

In addition, a correction appended yesterday to the online article alerts readers to the change. It states:

An earlier version of this article inaccurately cited the findings of a December report by a human rights group, Yesh Din, about investigations of crimes by Israeli civilians against Palestinians or their property in the West Bank. The group reported that only 8 percent of 1,252 cases of violence, property crime, seizure of Palestinian land and other offenses that it monitored between 2005 and 2019 had resulted in indictments. It did not report that only 8 percent of violent crimes — which the group said amounted to 36 percent of all the cases it monitored — had led to indictments.

Yesh Din examined 1,293 investigations, of which 1,252 were completed. Forty-one cases were still being investigated at the time that the NGO published its report.
A correction also appears in today’s print edition.
Donate Now