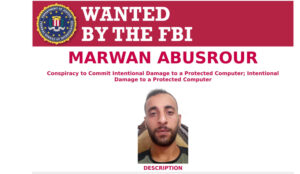 References to modern “Palestine” in the West Bank and Gaza are inaccurate. Among the multiple media outlets which have corrected this identical point are The Associated Press The New York Times The New York Post, National Geographic, The Los Angeles Times, Reuters (including also in Arabic), and Voice of America.

The UPI piece further erred by referring to the Palestinian Authority as a country. The article states:

Prosecutors said they believe Mohammadzadeh is 19 years olds and Abusrour is 25 and both currently reside in their native countries and are wanted by U.S. authorities.

Behzad Mohammadzadeh (a/k/a “Mrb3hz4d”), believed to be approximately 19 years old and a national of the Islamic Republic of Iran, and Marwan Abusrour (a/k/a “Mrwn007”), believed to be approximately 25 years old and a stateless national of the Palestinian Authority, were charged in an indictment unsealed today on one count of conspiring to commit intentional damage to a protected computer and one count of intentionally damaging a protected computer. The defendants are believed to be living in Iran and the Palestinian Authority and are wanted by United States authorities.

The Glasgow Times recently deleted an erroneous reference to the Palestinian Authority as a “state.”

In the hacking case, the erroneous “Palestine” terminology likely originated from Joseph R. Bonavolonta, Special Agent in Charge of the FBI Boston Division, quoted in the Justice Ministry’s statement, and also in the UPI story. He said: “Now, they are wanted by the FBI and are no longer free to travel outside Iran or Palestine without risk of arrest . . .”

As an FBI official, Bonavolonta’s expertise is in domestic intelligence, not international affairs. In the CIA Factbook, information about the Palestinian Authority and the governance of the West Bank (Areas A, B, and C) is available under the listing “West Bank.” There is no “Palestine” listing.

The State Department, the other US government body which deals with foreign affairs, likewise does not refer to the West Bank or the Palestinian Authority as either “Palestine” or a “country.” While quoting a source who uses misleading or inaccurate language is appropriate under certain circumstances, especially if the journalist alerts news consumers to the source’s misrepresentation, it’s problematic for media outlets themselves to adopt  misleading, partisan language, and worse, to upgrade the Palestinian territory to a country.

To their credit, United Press International editors immediately amended the story in response to communication from CAMERA. The article now refers to “Palestinian Marwan Abusrour” as opposed to “Marwan Abusrour of Palestine”; the reference to the accused who are believed to “both currently reside in their native countries” no longer appears; and Bonavolonta’s quote referencing “Palestine” has been deleted.