As most CAMERA readers surely will know by now, on September 15 the Abraham Accords were signed between the U.S., Israel, Bahrain and the United Arab Emirates. Several television news teams covered the historic event.

On Fox’s Outnumbered, Marie Harf, former Senior Advisor for Strategic Communications to Secretary of State John Kerry, was one of a number of commentators giving her views during the lead-up to the televised event. At about 12:18 PM, Harf said:

The Palestinians, a people without a state, a people whose land in the West Bank and Gaza has been increasingly taken over by Israeli settlements, today we are at a place while they were negotiating with Israel, more and more of the land they have been living on has been taken ….

We are left today with a group of people, human beings, who have no rights, no representative government, who are still under occupation and no plan, no pressure from the Arab side to advance that peace process.

Host Harris Faulkner pushed back by repeating former Israeli Ambassador to the U.N. Dan Gillerman’s statement just a few minutes earlier that there is still hope for Palestinians to come to the table, but not on Harf’s obviously erroneous claim about settlements. Of course, as anyone with a passing familiarity with the region knows, there have been no Israeli settlements in Gaza since 2005, when Israel removed, in some cases by force, every single one of its citizens that had been living there. 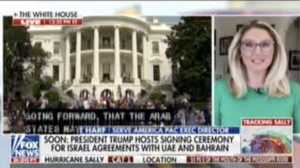 Just as egregious is Harf’s clear implication that Israel is to blame for Palestinians having “no representative government.” In both the West Bank and Gaza, there are governments that were initially elected by the Palestinian people. While it’s probably accurate to say that these governments are no longer “representative,” this has nothing at all to do with Israel. After the Israeli withdrawal from Gaza, elections were held in 2006. Those elections brought Hamas to power, and Hamas has held on to that power in a repressive manner ever since. On the West Bank side, Mahmoud Abbas was elected to a four-year term as President in 2005 and has refused to leave office or hold another election for over fifteen years.

Nor is it true that “today we are at a place while [the Palestinians] were negotiating with Israel, more and more of the land they have been living on has been taken.” To begin with, the Palestinians have not been negotiating. In 2010, Palestinians refused to negotiate for most of the duration of a ten-month settlement freeze. In 2014, Abbas refused to negotiate on the basis of an Obama administration framework. And earlier this year, Abbas refused to negotiate on the basis of the Trump administration “Peace to Prosperity” plan. (The Wall Street Journal quoted President Abbas as follows: “We say a thousand times, no, no, no to the deal of the century.”) And, Harf’s hyperbole notwithstanding, with the Abraham Accords, Israeli plans to extend sovereignty to parts of Area C have been put on ice.

In complaining that there is “no plan, no pressure from the Arab side to advance [the] peace process,” Harf seems to have missed the point. It’s not Israel that needs to be pressured – Israel has offered the Palestinians their own state time and again, and as noted above, the Palestinians have frequently refused to even negotiate. The Abraham Accords do put on pressure to advance the peace process – but they are now putting pressure on the correct party, the one that has been intransigent, the Palestinian leadership.