CAMERA’s Israel office prompted correction of a New York Times story Monday which erroneously described the Western Wall as “the last remaining part of an ancient Jewish temple that was destroyed in antiquity” (“Israeli Is Killed by Palestinian Near Holiest Site in Jerusalem,” by bureau chief Patrick Kingsley and Myra Noveck).

The characterization is wrong for two reasons. First, the Western Wall was not a part of the temple itself; it was a retaining wall for the Temple Mount, the plaza on which the temples stood. 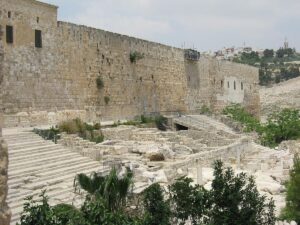 Second, the Western Wall is not the last remaining part of the Temple Mount complex. In fact, there are many extant remains from the temple complex including the southern, eastern and northern retaining walls. Extant features abutting the southern wall include a broad stairway leading up to the Temple Mount’s entrance and two gates, known as Huldah Gates, which provided access to the Temple Mount (Hershel Shanks: Jerusalem: An Archeological Biography, p. 143). Some of the interior part of the Herodian Double Gate (which is one of the Huldah Gates) is also still intact. In addition, an area called “Robinson’s Arch,” in the south-western corner of the Temple complex, still remains. In his book, Shanks provides details concerning numerous other remnants.
In addition to the structural remains that are still in their original locations, items from the temple and activity that took place there have been recovered at the Temple Mount Sifting Project in Jerusalem. Established by archeologists, the project invites members of the public to sift through the 6,000 tons of dirt and remains which the Muslim Waqf recklessly, without any archeological care, removed with a bulldozer in 1999 and subsequently dumped in the nearby Kidron Valley. 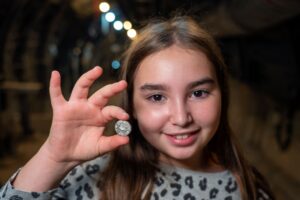 Liel Krutokop with the coin she found (Photo by Yaniv Berman, City of David and IAA)

Indeed, just yesterday at the sifting project, an 11-year-old girl found a 2000 year-old coin which may have been minted at the Temple Mount plaza. According to the Israel Antiquities Authority press release:

Scholars believe that the coin unearthed was extracted from the many silver reserves kept in the Second Temple and was probably minted by one of the Temple Priests, who joined forces with the Great Revolt of the Jews against the Romans, shortly before the destruction of the Second Temple.

“A currency is a sign of sovereignty. If you go into rebellion, you use one of the most obvious symbols of independence, and you mint coins. The inscription on the coin clearly expresses the rebels’ aspirations. He said,” The choice to use ancient Hebrew script, which was no longer in use at the time, is not accidental. The use of this script came to express the longing of the people of the period for the days of David and Solomon and the days of a united Jewish kingdom – days when the people of Israel had full independence in the land.”

Media outlets which have corrected the identical error misidentifying the Western Wall as the last remaining remnant of the Temple Mount complex include Reuters, The Los Angeles Times, Associated Press, and Haaretz.
In response to communication from CAMERA, The Times amended the language in the online article, which now refers to the Western Wall as “one of the last remaining parts of an ancient Jewish temple compound that was destroyed in antiquity.”
Similarly, a correction is appended to the bottom of the article, stating: