The Associated Press has repeatedly demonstrated identification with rogue journalists who last May called for reporting the “contextualized truth” — that is filtering coverage through the distorting prism of “Israel’s military occupation and its system of apartheid.”

Forcing facts to artificially fit into a predetermined partisan narrative is antithetical to ethical journalism as defined by the longstanding Code of Ethics of the Society for Professional Journalists, and necessitates discarding information that counters the “contextualized truth.”

Tia Goldenberg’s Nov. 23 Associated Press dispatch, “Back in power, Israel’s Left finds its influence is limited,” embodies the wire service’s unethical partiality for the partisan, anti-Israel frame championed by the group of journalists against ethical journalism.

Thus, writing about the limited influence of left-wing parties in the broad Israeli government coalition on Palestinian-related issues, Goldenberg finds only Israeli blame “as hopes for a Palestinian state slip further away under their watch, with settlement construction booming and peace talks a distant memory.” The left-wing coalition members “are finding their influence is limited, with coalition partners who support Jewish West Bank settlement showing little appetite for compromise and the country’s decades-long occupation churning on.”

Yet the occupation grinds on. Under the current government, Israel has moved ahead on building thousands of homes for settlers in the West Bank. Its defense minister has outlawed six Palestinian rights groups, alleging links to a militant faction. Radical settlers have stepped up violent attacks on Palestinians in the occupied West Bank, as Israeli soldiers stand by or assist the settlers. Prime Minister Naftali Bennett, who once headed the country’s main settler lobbying group, rejects the idea of a Palestinian state, and Palestinians remain deeply pessimistic about the near-term future.

In the “contextualized truth” only Israelis have responsibility for the ongoing complex reality in the West Bank, or as AP puts it: “The occupation grinding on.” Only Israelis are bad actors, stepping up violent attacks, outlawing rights groups, rejecting Palestinian statehood. By Goldenberg’s telling, if only Meretz and other left-wing Israeli parties were more influential, peace would reign and the occupation would end.

Palestinian culpability simply does not have any place in the reporting of anti-Israel “contextualized truth.” Not even in a week of difficult events underscoring that the Palestinians “are more than just victims,” as former New York Times public editor Margaret Sullivan once wrote.

Indeed, on Sunday, Palestinian terrorist Fadi Abu Shkhaydam carried out a deadly shooting attack in Jerusalem’s Old City, murdering Eli Kay, 26, of Modiin, and injuring four others.  Also, this week a Palestinian stabbed an Israeli in Jaffa, an attack suspected of nationalist motive. Last week, another Palestinian carried out a stabbing attack in the Old City, wounding two border guards. 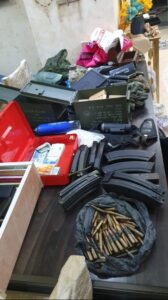 Moreover, in an alarming development, on Monday Israel announced the arrest of more than 50 Hamas members across the West Bank who were in advanced stages of carrying out a series of major terror attacks on both sides of the Green Line.

As Times of Israel reported:

The Israeli effort to uncover the cell has been ongoing for several months, first coming to light with a round of initial arrest raids in September, including one in which two Israeli soldiers were seriously injured and several Palestinian suspects were killed in gunfights.

According to the Shin Bet, over 50 Hamas operatives were arrested across the West Bank for suspected involvement in the cell and large quantities of weaponry was seized, including the materials needed to make four explosive belts for a suicide attack.

Saleh Al-Arouri, the Hamas leaders based in Turkey, offered Hijazi Qawasmeh of Hebron $1 million to kidnap an Israeli, and supplied him with hundreds of thousands of shekels to prepare his cell’s network, Haaretz reported.

“The purpose of intensified terrorist activity planned by Hamas operatives abroad and in Gaza vis-à-vis operatives in the West Bank is to destabilize the area, while imposing a heavy price on local residents.”

Goldenberg apparently does not regard Hamas’s immense and concerted efforts to turn the clock backward to the horrendous days of relentless mass-casualty bombings in the Second Intifada as at all relevant to the present reality in which, as she puts it, “the occupation grinds on.”

(Goldenberg euphemistically refers to the bloody Second Intifada, in which Palestinian terrorists killed more than 1000 Israelis in bombings, shootings, and stabbing attacks as “the outbreak of a Palestinian uprising later that year.”)

On Monday, when news about the large-scale arrest of scores of Hamas members in advanced stages of planning massive deadly attacks emerged, AP subsumed it under a story which the wire service deemed much bigger news: two Palestinian prisoners on a hunger strike struck a deal with Israel (“Two Palestinians end hunger strike after deal with Israel“).

Also relevant to “the country’s decades-long occupation churning on” is the fact that Palestinians have rejected multiple statehood offers intended to bring an end to the occupation, as CAMERA’s Sean Durns details. But Goldenberg makes no mention of the Palestinians’ repeated spurning of Israeli offers for statehood. Along with Palestinian terrorism, Palestinian rejectionism does not fit with the “contextualized truth” of singular Israeli wrongdoing.