The Associated Press has once again trampled over its lofty mission to provide “world-class journalism” in pursuit of “advancing the power of facts.” Instead of reporting the facts in favor of Israel’s designation of six Palestinian NGOs as fronts for the Popular Front for the Liberation of Palestinian terror organization, AP’s Joseph Krauss advanced partisanship.

The notion that Israel has been carrying out a decades-long crackdown on political activism in the Palestinian territories is a baseless, partisan allegation put forward by the very same organizations now blacklisted by Israel as terror organizations. There is simply no evidence to support the gross smear. It is not a fact, although AP’s Krauss states it as fact, without any attribution.

Israel has effectively outlawed six prominent Palestinian human rights groups by declaring them terrorist organizations, a major escalation of its decades-long crackdown on political activism in the occupied territories. https://t.co/sxjeura8Aa

In order to establish Israel’s designation of the six Palestinian NGO’s “a major escalation” in the purported “decades-long crackdown on political activism,” Krauss must omit all information which, in fact, points to the terror activity of these groups.

And that’s exactly what he does. Instead of harnessing the power of facts, Krauss obscures the facts that don’t fit his fallacious frame.

Krauss wrote that the Defense Ministry “said the groups serve as a ‘central source’ of financing for the PFLP [Popular Front for the Liberation of Palestine] and has received ‘large sums of money from European countries and international organizations,’ without elaborating.” (Emphasis added.)

Robust reporting doesn’t rely on spoon-feeding from a Defense Ministry press release. Indeed, there’s no shortage of open source material tying the relevant groups to PFLP. It was readily available for Krauss to find, if only he cared to do so.

In 2016, Israel’s Kan 11 aired an in-depth broadcast on PFLP members serving as officials in the various Palestinian NGOs which receive vast European funding. On Friday, Haaretz, for instance, reported about one of the said organizations:

The Union of Agricultural Work Committees is an organization that assists Palestinian farmers, especially in Area C. Two members of the organization, Samer Arbid and Abdel Razeq Farraj, members of the Popular Front for the Liberation of Palestine, have been indicted for involvement in the 2019 murder of Rina Shnerb. Arbid was charged with murder and Farage was charged with aiding and abetting.

In addition, as CAMERA UK documented this year, Ubai Al-Aboudi, executive director of the Bisan Center, another of the newly outlawed organizations, was a PFLP member arrested in 2005 for his role in a planned suicide bombing, which was to transport the two bombers. A 2019 report by Israel’s Ministry of Strategic Affairs and Public Diplomacy, “Terrorists in Suits,” provided detailed well-sourced information on three of the six groups: Addameer, Al-Haq and Defense for Children International – Palestine.

(It’s worth recalling what former AP reporter Mati Friedman wrote back in 2014 about AP’s blacklist of the NGO watchdog group:

[t]he bureau’s explicit orders to reporters were to never quote the group or its director, an American-raised professor named Gerald Steinberg. In my time as an AP writer moving through the local conflict, with its myriad lunatics, bigots, and killers, the only person I ever saw subjected to an interview ban was this professor.) 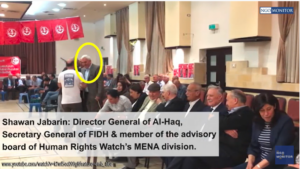 “World-class reporting” would have also uncovered the fact that Shawan Jabarin, general manager of Al-Haq, one of the blacklisted Palestinian organizations, sits on Human Rights Watch’s MENA advisory committee, despite his documented ties to PFLP. Such a conflict of interest is highly relevant to Human Rights Watch’s statement condemning the Israeli designation of Al-Haq as a terror front. Yet, Krauss covers up the connection, thereby falsely depicting HRW as a credible, objective and completely independent observer:

New York-based Human Rights Watch and London-based Amnesty International released a joint statement condemning the move as an “attack by the Israeli government on the international human rights movement.”

What is the PFLP?

PFLP, designated as a terror group by numerous Western governments, is responsible for numerous international hijackings, along with the 2011 slaughter of Udi and Ruth Fogel and three of their children as they slept in their home, the brutal 2014 massacre of worshippers in a Har Nof, Jerusalem synagogue, the 2019 murder of teen Rena Shnerb, and many other fatal attacks.

Not for the first time, AP rather stunningly diminished the terror credentials of Popular Front for the Liberation of Palestine. Krauss’s sixth paragraph refers to the terror group as “a secular, left-wing movement with a political party as well as an armed wing that has carried out deadly attacks against Israelis. Israel and Western countries consider the PFLP a terrorist organization.” The mischaracterization of PFLP as “a political party as well as an armed wing” is totally disingenuous rejected by those many Western governments which have designated it a terror organization. In addition, PFLP was also responsible for the murder of foreigners, not only Israelis, including the 1972 deadly Lod airport massacre in which more than a dozen Christian tourists from Puerto Rico were murdered.

Channeling the call of hundreds of journalists who seek to replace factual reporting with a partisan, anti-Israel agenda falsely painting Palestinians as blameless victims of Israeli oppression, Krauss carefully sidesteps the readily available information that contradicts his preferred frame of “a major escalation” of a “decades-long crackdown on political activism.” Information that cannot be dropped is massaged into conformity per PFLP’s “political party.”

Update (3:15 pm EST): NGO Monitor has informed CAMERA that it sent its detailed Oct. 20 report to AP’s Jerusalem bureau on Oct. 22, hours before Krauss’ article was published. In other words, Krauss was spoon-fed the material, and yet he actively opted not to report it, an even more damning journalistic malpractice.