The Associated Press, a leading news agency whose stated mission is “advancing the power of facts” with “world-class journalism,” yesterday appeared to take a page out of the open letter signed this month by hundreds of journalists against ethical journalism. The letter signatories seek to replace factual reporting with a partisan, anti-Israel agenda falsely painting Israel as a criminal, apartheid state and Palestinians as blameless victims of Israeli oppression (“From journalists to journalists: Why reporting on Palestine has to change“).

“We have failed our audiences with a narrative that obscures the most fundamental aspects of the story: Israel’s military occupation and its system of apartheid,” charge the media crusaders. “We are calling on journalists to tell the full, contextualized truth without fear or favor, to recognize that obfuscating Israel’s oppression of Palestinians fails this industry’s own objectivity standards.” The “contextualized truth,” of course, is Israel’s alleged apartheid nature and military occupation. 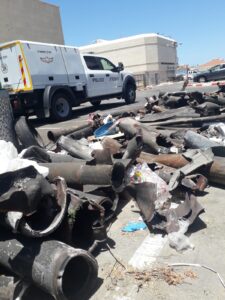 AP heeded the call, yesterday funneling information through the prism of military occupation, discarding inconvenient facts that failed to serve the cause of “the Palestinian people,” as the letter puts it.

Biden has moved to reverse Netanyahu-backed Trump policies that alienated the Palestinians, and the administration has said Israelis and Palestinians should enjoy equal measures of security and prosperity.
But the U.S. has yet to explain how it intends to bring that about without ending Israel’s half-century military occupation of the West Bank, its blockade on Hamas-ruled Gaza and discriminatory policies in Jerusalem that fueled a spring of unrest.

The last paragraph is an extremely partisan formulation. It completely ignores the following obstacles to security: Palestinian demands for a so-called “right of return” of refugees and their millions of descendants, which fair observers understand as an existential threat to the only Jewish state; Palestinian rejectionism of Israel as a Jewish state and the consistent Palestinians rejection of offer after offer of a Palestinian state alongside Israel; Palestinian denial of any historic Jewish connection to the land, including its most holy site in Jerusalem; government-backed incitement calling for attacks on Israeli civilians; Palestinian Authority payments to terrorists and their families; Palestinian investment in terror infrastructure such as rockets and tunnels at the expense of investment in its civilians; Palestinian rocket-firing on Israeli civilians and arson attacks on southern Israel; Hamas camps that brainwash a generation of kids to admire suicide bombers and other terrorists; and so on.
All of these points feature Palestinian actions as obstacles to conflict resolution. Every single one of them counters the “full, contextualized truth” as the media crusaders, including one anonymous AP journalist, see it, and thus, they believe, have no place in reporting on behalf of the Palestinian narrative.
“Expand the reach of factual reporting,” promises the AP even as it suppresses information contradicting the favored anti-Israel narrative.
“The free exchange of information has been replaced with the free expungement of inconvenient information,” wrote this media critic last week in The New York Daily News, weighing on the open letter’s heavily partisan agenda as anathema to ethical journalism.
“Label advocacy and commentary,” exhorts the Society of Professional Journalists’ Code of Ethics. Turn news into advocacy, counter the unethical practitioners. And the Associated Press, quietly laying aside its longstanding commitment to factual reporting, obliged.