A common media refrain is that while Jews can recover property they lost in the 1948 war, no comparable mechanism allows for Arabs to recover property lost in the same war. In a June 22 article about violent clashes in the Sheikh Jarrah neighborhood of Jerusalem, where Arab tenants face possible eviction after failing to pay rent to the Jewish owners, Times of Israel repeated the misinformation:

They are based in part on a 1970 Israeli law that allows Jews to reclaim East Jerusalem land owned by Jews before 1948. No similar law exists for Palestinians who lost their homes during the 1948 war and the Knesset passed a law in 1950 barring them from reclaiming property lost. 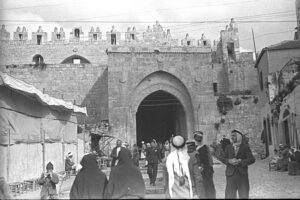 Property left behind by Arabs who fled during the fighting in 1948 (ie, absentee property) was turned over to Israel’s Custodian of Absentee Property, which transferred title to state or related bodies for public purposes, such as housing the hundreds of thousands of Jewish refugees from Arab countries who found refuge in Israel. The Custodian held the value of the property in trust for the registered Arab owner (with adjustments for inflation and interest). These actions were completely within international norms, and the office itself and its functions were inherited from the similar British Mandate office.

Those registered Arab owners who are citizens or residents of Israel (including Palestinians resident in East Jerusalem) are eligible to file for compensation from the Custodian, but they were pressured not to make claims, lest that legitimize Israel’s existence and sovereignty. Still, over the years at least 14,692 claims have been filed, claims have been settled with respect to more than 200,000 dunums of land, more than 10,000,000 NIS (New Israeli Shekels) has been paid in compensation, and more than 54,000 dunums of replacement land in Israel has been given in compensation. Israel has followed this generous policy despite the fact that not a single penny of compensation has ever been paid to any of the more than 500,000 Jewish refugees from Arab countries, who were forced by the Arab governments after 1948 to abandon their homes, businesses and savings.

West Bank Palestinians are not eligible to file with Israel for property they lost after 1948, but neither are Israeli Jews eligible to file for property they lost in the West Bank (excluding East Jerusalem) after 1948. This has been the position of the Israeli government and was confirmed in the so-called Valero decision by Israel’s Supreme Court.

Israeli Jews are eligible to file for compensation (or return in rare cases) for land that was lost in East Jerusalem after 1948. Ownership of much of the land taken by the Jordanian Custodian of Enemy Property was transferred to the Jordanian government, which used it, for example, to construct government buildings in East Jerusalem, and to create the Dheisheh Refugee Camp – which is built entirely on Jewish-owned land. In addition, Palestinian refugee camps at Qalandia and Anata were built in part on Jewish land that had been taken by the Jordanian Custodian. (See Arab Building in Jerusalem: 1967—1997, Israel Kimhi, p48-49; for Dheisheh, see also, from the leaked Palestine papers, NSU Draft Memo Re: Rights of Jews Within the OPT Acquired pre-1967.)

None of the land used for refugee camps or government buildings in East Jerusalem can be returned to the original Jewish owners, but they can file for compensation. The land in Sheikh Jarrah was an exception because it was leased to the Jordanian government rather than taken by eminent domain, and was therefore still on the books of the Jordanian Custodian as Jewish land and could be returned to the successors of the original Jewish owners.

To their credit, Times of Israel editors commendably amended the article to more accurately reflect the complex issue. The revised text states:

The land in question was owned by Jews before the 1948-49 Independence War, when it was seized by Jordan and leased to Palestinian families. After Israel captured the area in the 1967 war, a 1970 Israeli law transferred all abandoned properties still held by the Jordanian government, including the Sheikh Jarrah homes, to the custody of the Israeli government. The law further obligated the release of properties to original owners when possible. The Jewish trusts that had owned the site appealed for its return to their hands, sparking a five-decade legal battle between the trusts and the Palestinian residents.

Israel says the issue is a private property dispute to be adjudicated by the courts. Palestinian residents argue that the demand to reclaim the site is part of a campaign by Israeli settlement groups to displace them and replace their community with a Jewish one.