In response to communication from CAMERA, journalist Sébastien Roblin amended the article to acknowledge that Hamas' tunnels into Israel are for attacks, not smuggling. The unemployment rate error has not been corrected. See below for a detailed update. 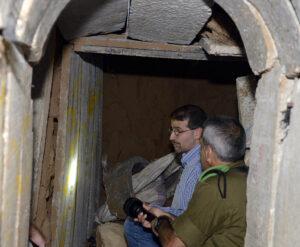 "I was shocked from what I saw in the tunnel. It is clear that this tunnel has only one purpose: to carry out terrorist attacks against Israeli civilians and IDF soldiers," said then U.S. Ambassador Israel Dan Shapiro while visiting a cross-border Hamas tunnel in October 2013 which had led from the Gaza Strip to Israel.

What was plainly clear to President Obama's ambassador — that Hamas tunnels from Gaza to Israel are used for terror purposes — is now lost on the Daily Beast. In his June 25 article, "Israel is Sending Robots With Machine Guns to the Gaza Border," Sébastien Roblin, a reporter specializing in international affairs, security and military history, errs:  "The barriers extend underground too, blocking some but not all cross-border tunnels used by Palestinian smugglers." But as Shapiro rightly noted, the cross-border tunnels extending from the Gaza Strip into Israel are used for attacks, not smuggling. Roblin is conflating the attack tunnels into Israel with the smuggling tunnels that extend from the Gaza Strip into Egypt.

As NPR reported in 2014, in an article addressing both the attack tunnels to Israel and the smuggling tunnels to Egypt:

Over the past week, Israel said its troops had at least two separate firefights with militants coming out of tunnels into Israeli territory. The military said weapons, Israeli uniforms, plastic handcuffs, and tranquilizers have been found in tunnels — tools for both potential attacks and potential kidnappings, Israel says.
One of those tunnels emerged near Israel's Kibbutz Nir Am, a lush gated community just a few hundred yards away from the northern tip of the Gaza Strip. Five Hamas gunmen shot dead four Israeli soldiers before they were killed themselves in a battle Monday.

Indeed, Gilad Shalit, who spent five years incommunicado in a Hamas prison in the Gaza Strip, can confirm Shapiro's information. Shalit, who got married last week, wasn't captured in a smuggling mission (indeed, smugglers aren't generally in the hostage-taking/prisoner exchange business), but in an unprovoked cross-border attack in which seven armed terrorists entered Israeli through a tunnel, killing two soldiers wounding five.

In a second straightforward factual error, Roblin overstates the unemployment rate in the Gaza Strip: "Over two million people inhabit the tiny coastal strip, and they must endure a 70 percent unemployment rate . . . " In fact, according to latest statistics published by the Palestinian Central Bureau of Statistics, Gaza unemployment for the first quarter of 2021 stands at 48 percent, not 70 percent.

Beyond the blatant factual errors, Roblin's article is marred by grossly tendentious reporting. For instance, he links to The Guardian to propagandize that Gaza Strip as an "open-air prison," he writes:

Gaza is often described as the world’s largest open-air prison. Over two million people inhabit the tiny coastal strip, and they must endure a 70 percent unemployment rate; frequent shortages of medical supplies, fuel and clean water; constant power outages; and the fundamentalist governance of the extremist group Hamas. Add to that the Israeli air strikes that knocked down multiple high-rise residential buildings in a war last May—the third war since Hamas seized control of Gaza in 2007.

This facile mischaracterization fails to take into account that Israel does not restrict medical supplies, aside from very few "dual use" items like x-ray machines, which are restricted (but not prohibited), as Associated Press and New York Times corrections were compelled to acknowledge. The Daily Beast passage fails to acknowledge that the Fatah-Hamas rivalry is the cause of constant medical supply shortages in the Gaza Strip. Nor does the author note that the air strikes against multiple high-rise buildings targeted Hamas command centers embedded within the residential towers.

Improvements to the barrier have caused Hamas to redirect efforts towards cultivating an arsenal of inaccurate long-range rockets it can launch towards Israeli cities from within Gaza, though the crude nature of the weapons mean a substantial fraction fall within Gaza, sometimes causing casualties.

Not only "can" Hamas launch these rockets towards Israeli cities; it also does — a salient point which Roblin overlooks. And, while 680 out of the more than 4,360 rockets that Gaza terror groups launched last month reportedly did fall short and land in the Gaza Strip, killing and maiming Palestinians there, the weapons, developed with Iranian financial aid and expertise, are hardly "crude." Were it not for the tremendous success of Israel's Defensive Iron Dome, which shot down over 90 percent of the rockets that were headed to populated areas, estimates are that close to 100 people on the Israeli side would have been killed from Hamas' "crude" rocket fire.

The journalist projects, himself ignoring the underlying political issues, while accusing Israel of failing to do so. He faults Israel for, as he puts it, not "attempting to address the material and political conditions feeding a seemingly interminable conflict." Indeed, the material hardships in the Gaza Strip would be vastly mitigated were Hamas to invest in its civilian population instead of spending, for instance, $1.25 billion on so-called "smuggling" tunnels and millions more on 14,000 supposedly "crude" rockets." Perhaps that's a topic for the international affairs and security journalist to explore.

This is the damage caused to an Israeli home by just ONE of the 2900 Hamas rockets fired from Gaza into Israel.

Israelis are under attack. We will continue to defend them. pic.twitter.com/RmKgP0Tn71

This is the damage caused to an Israeli home by just ONE of the 2900 Hamas rockets fired from Gaza into Israel.

Israelis are under attack. We will continue to defend them. pic.twitter.com/RmKgP0Tn71

Barrages of rockets are being fired non-stop from Gaza into southern Israel.

Tonight, a rocket hit the city of Ashdod—see the damage for yourself.

Barrages of rockets are being fired non-stop from Gaza into southern Israel.

Tonight, a rocket hit the city of Ashdod—see the damage for yourself.

In response to communication from CAMERA, Roblin commendably amended the article to reflect that fact that Hamas' cross-border tunnels into Israel are meant for attacks, not smuggling. The updated text states:

The barriers extend underground too, blocking some but not all tunnels into Egypt and Israel used by Palestinian smugglers and attackers respectively.

On the other hand, Roblin stood by the Gaza Strip unemployment figure of 70 percent, relying on erroneous Los Angeles Times reporting. While The Los Angeles Times unfortunately neglected to correct its erroneous report claiming Gaza unemployment of 69 percent, the reporter, Hana Salah, has gone on to correctly cite the PCBS figure of 48 percent in The National. CAMERA asked Roblin to provide an official (Palestinian Central Bureau of Statistics, World Bank, United Nations, etc) source substantiating the 70 percent claim, and as of this writing he has not done so.