CAMERA’s Israel office yesterday prompted correction of an Associated Press article about the Coronavirus crisis across the Middle East which had falsely charged that Israel prevents surgical supplies from reaching the Gaza Strip. The March 18 article, “Ravaged by war, Middle Eastern countries face a new scourge,” had erroneously reported:

In the Gaza Strip, medical infrastructure has been strangled by a 13-year blockade imposed by Israel with Egypt’s help, preventing the passage of even critical goods like surgical supplies.

X-ray machines, defined as a dual use item and therefore heavily restricted by Israel, appear to be the exception in a policy which otherwise permits the entrance of surgical supplies. Lists of goods considered dual use, meaning which serve both a civilian as well as military purpose, are available at Israel’s Foreign Ministry, as well as the NGO Gisha, which is highly critical of Israel’s policies with respect to the Gaza Strip. 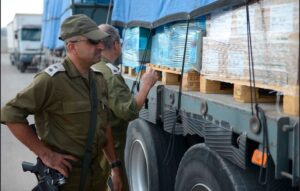 As the United Nations wrote in its 2017 report (“Gaza Ten Years Later“), from the period of 2007 to 2010, the first stage of Israel’s blockade of the Gaza Strip: “In terms of imports, only ‘basic humanitarian products’ (primarily food, fodder, medical supplies and hygiene items) were allowed in.” The report notes that in Phase II of the blockade, from 2010 to 2014, restrictions were eased compared to the proceeding periods. The report adds:

Israel considers many materials needed for these projects to be ‘dual-use’ and posing security concerns, thus subjecting them to severe import restrictions. These include construction materials, raw material for the productive sectors, including wood and pesticides, medical equipment and water pumps necessary to deal with seasonal flooding. Despite improvements, particularly for construction materials, the import of other ‘dual-use’ items faces significant delays in approval for importation.

Regarding “dual-use” items, the report notes: “Such items were only allowed in for projects funded by international organizations through a multi-layered system of approvals regulating the entry of each individual consignment of materials.” Thus, entry of dual-use items, including some medical equipment, face delays but are permitted within certain restrictions.
Following communication from CAMERA’s Israel office, the Associated Press commendably amended its report. The substantively improved copy now also notes mismanagement of the medical infrastructure by Hamas, the terror organization which rules the territory,  and it also no longer falsely claims that Israel prevents the entrance of surgical items. The amended text reports:

In the Gaza Strip, medical infrastructure has been strangled by mismanagement by the Islamic militant Hamas rulers and a 13-year blockade imposed by Israel with Egypt’s help that has complicated the passage of key medical equipment and supplies.

CAMERA’s timely action vis-à-vis yesterday’s AP article underscores the value of the organization’s monitoring and responding to wire stories in the same news cycle as they appear. With this preemptive work CAMERA helps prevent misinformation from appearing in media outlets around the world. As a result of the AP correction, the accurate information now appears in additional media outlets including the Washington Post and the Charlotte Observer.
Donate Now