An Associated Press headline today proclaims “Watchdog says Israel’s West Bank settlements surged in 2019,” when, in fact, construction was started on fewer Israeli housing units in the West Bank last year compared to 2018.  As the article itself indicates several paragraphs into the story, 2019 construction starts decreased in comparison to 2018:

According to Peace Now figures, Israel began construction on 1,917 new homes in the West Bank last year. That marked a slight dip from 2,100 construction starts in 2018. 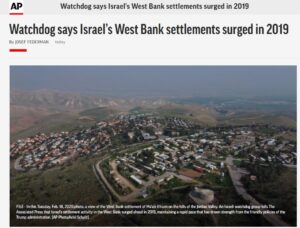 In addition, according to Peace Now, the figure in 2017 was 2783 construction starts, so 2019 represents a significant dip in construction over the last two years – hardly a “surge.”
It’s true that the number of advanced plans did increase (8,547 units in 2019 compared to 5,618 in 2018), but, as noted above, actual construction was down in 2019.  Advanced plans relate to future – not current – construction, which, especially in today’s uncertain world, may or may not come to fruition.
CAMERA has contacted AP to request that the misleadingly reports “Watchdog says Israel’s West Bank settlements surged in 2019.” More accurate language would be “Watchdog says Israel’s West Bank settlement planning surged in 2019.”
Donate Now