CAMERA this week prompted correction of an Associated Press article which incorrectly reported that there is no egalitarian prayer area at Jerusalem’s Western Wall, the holiest site where Jews are permitted to pray. The Dec. 10 article (“Natan Sharansky receives Israel’s prestigious Genesis Prize“) had erred:

Sharansky attempted to broker a compromise that would have allowed liberal streams of Judaism that are popular overseas to have an egalitarian prayer area at Jerusalem’s Western Wall. The plan was abandoned by Israeli Prime Minister Benjamin Netanyahu. . . 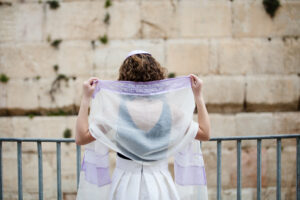 Lainee Cantor of Winnipeg, Manitoba celebrates her bat mitzvah in the egalitarian prayer space at the Western Wall (Photo by KRifkind Photography)

In fact, such an egalitarian prayer area was already in place (and still is.) Sharansky’s plan which Netanyahu abandoned was to expand the area and get it official recognition along with a more central entrance.
As the AP detailed June 26, 2017 (“Jewish groups cancel meetings with Netanyahu in protest”):

Cabinet Minister Naftali Bennett, who established the current egalitarian prayer area four years ago, called the government decision unfortunate, but not a major disaster. . .
Jewish Agency Chairman Natan Sharanky, who masterminded the plan to expand and normalize the egalitarian area, called on the government to reverse course, saying the move undermines Jewish unity. . . .
The dramatic about-face at Sunday’s Cabinet meeting followed the initial approval of the plan in January 2016 to officially recognize the special mixed-gender prayer area at the Western Wall. . . .
Under the plan the egalitarian area would be expanded and receive a more central entrance alongside entrances to the current male and female prayer sites. (Emphasis added.)

Prior to his plan to expand the egalitarian prayer space, earlier (circa 2012), Sharansky headed a committee which led to the space that Bennett established. See Tablet for details.
In response to communication from CAMERA, AP commendably amended the article, which now accurately reports:

In that role, Sharansky attempted to broker a compromise that would have developed and upgraded a small egalitarian prayer area at Jerusalem’s Western Wall. The plan was welcomed by liberal streams of Judaism popular overseas, but was frozen byIsraeliPrime Minister Benjamin Netanyahu under pressure from ultra-Orthodox allies who oppose mixed-gender prayers. Sharansky, 71, stepped down from the agency last year.

CAMERA’s timely action vis-à-vis yesterday’s AP article underscores the value of the organization’s work monitoring and responding to wire stories in the same news cycle as they appear. With this preemptive work CAMERA helps prevent misinformation from appearing in media outlets around the world. As a result of the AP correction, the accurate information now appears in additional media outlets including The Washington Post and The San Francisco Chronicle. As of this writing, Ynet still has the original, accurate AP copy. CAMERA has alerted editors to the error.
CAMERA wishes Natan Sharansky, a past recipient of CAMERA’s Emet Award, a hearty mazal tov on the occasion of his receiving the Genesis Prize.
Donate Now