Rick Wiles has carved out a lucrative grift for himself and a bunch of other hangers-on at TruNews, an internet news broadcast station headquartered in Vero Beach, Florida.

Instead of going head-to-head with Christian Broadcasting Network (CBN), which enjoys a viewership in the millions, Wiles is content to reach out to a modest number of viewers who log onto YouTube to hear him rant about evil Zionist Jews who have hijacked Christianity, the United States, and the international system.

Wiles’ rants are so hostile, so incendiary, so crazy and over the top, that his rhetoric would fit right in with the Jew-hatred promoted by Muslim clerics at Al Aqsa mosque in Jerusalem.

For example, in one TruNews video, Wiles video declared that President Donald Trump secretly converted to Judaism in 2017. In another he declared that the “Anti-Christ will be a homosexual Jew.”

In an episode that aired Monday, December 9, 2019 Wiles and his two sidekicks, “Doc” Burkhart and Ed Szall analyzed a Dec. 7, 2019 speech by President Donald Trump at the Israel American Council. Wiles said that Trump’s speech was emblematic of how badly American churches have been infiltrated and corrupted by Zionism.

During his rants, Wiles said he used to think former President Barack Obama was anti-Israel, but eventually concluded he was, in fact, behaving like a Zionist Jew. Wiles declared that President Obama’s “political brilliance was that he made you think he was a Muslim, he said he was a Christian, but he acted like a Jew.”

At this point, Wile’s sidekick Ed Szall declared that Obama was a Freemason.

“And he was a Freemason,” Wiles continued. “He was brilliant. He did not advance Islam during his eight years. He advanced Zionism. He turned this country into accepting homosexual marriage. We could go down the list.” 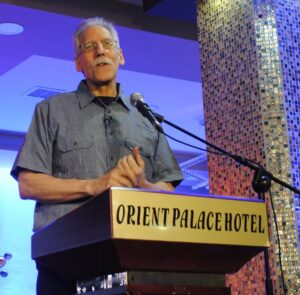 Dr. Michael Brown, author of “Our Hands are Stained With Blood,” a text on Christian antisemitism, speaks at the Christ at the Checkpoint in 2018.

Wiles then declared that the Zionist movement is not monolithic but characterized by a secular wing and a religious wing who compete for “central control of world Zionism.”

He also declared that he will not allow TruNews to be used as a front for Zionist propaganda, but stated that he will work to oppose the infiltration of Evangelical Protestantism in the U.S. with Zionist beliefs. In particular, Wiles asserts that Evangelical supporters of Israel have been convinced “that a fake Israel that is occupying Israel is the Israel of God.”

The goal of this movement, Wiles declared, “is to rob the identity of Christians as God’s people.”

When President Trump expresses his support for Israel, Wiles added,” he’s talking about a place that despises Jesus Christ.”

Adopting the rhetoric of Catholic antisemite E. Michael Jones, Wiles added that, “The Jews need to stop fighting God” and that Christians who bless Israel are “blessing that which God cursed.”

“The Jewish people that have rejected Jesus Christ are under a curse,” Wiles declared. “They’ve been under a curse for thousands of years.”

Under questioning from one of his sidekicks, Wiles acknowledged that under Christian theology all of humanity has been under a curse, but that “the Jewish people have an extra layer of curse” because they broke covenant with God.

Christian leaders throughout the United States have condemned Wiles’ expressions of antisemitism. Dr. Michael Brown, who challenged organizers and attendees of the 2018 Christ at the Checkpoint Conference in Bethlehem to condemn Palestinian terrorism declared earlier this year, “May [Wiles’] words find their way into the trash heap of ideas, and may they be forgotten as quickly as they were spoken.” 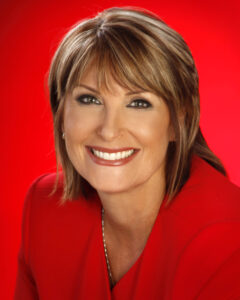 Laurie Cardoza-Moore, President and Founder of Proclaiming Justice to The Nations and Special Envoy to the UN for the World Council of Independent Christian Churches (WCICC) condemned Rick Wiles’ antisemitism.

On Dec. 4, 2019, Laurie Cardoza Moore, President and Founder of Proclaiming Justice to The Nations and Special Envoy to the UN for the World Council of Independent Christian Churches (WCICC), condemned Wiles’ antisemitic rants.

“Christian leaders must join me across the U.S. in calling this man out publicly by condemning his outrageous incitements to violence,” she said.

On Tuesday, Dec. 10, 2019, three Jews were murdered in Jersey City by two participants of a movement that calls itself “Black Hebrew Israelites.” One of the tenets of this movement is that modern day Jews are not really Jews, but imposters, or in the words of Rick Wiles, “fake Jews.”