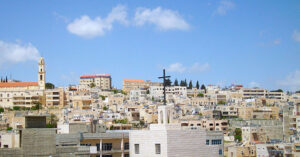 View of Bethlehem, near Church of Nativity (Photo by Daniel Case/Wikimedia)

Times of Israel yesterday corrected an Associated Press article appearing on its site which incorrectly described the West Bank city of Bethlehem “as almost completely surrounded by the [Israeli security] barrier and a string of Jewish settlements.” As detailed on CAMERA’s Snapshots blog yesterday, while the city is partly surrounded by Israel’s security barrier and Jewish communities over the Green Line, it is not “almost completely surrounded.”

The Peace Now map below clearly shows where the barrier exists (solid red line) or is planned (dotted red line) on the northern and western sides of Bethlehem. On the south east, there are the settlements (solid pinks blocks) of Tekoa, Nokdim and Sde Bar. To the north and west of this block of settlements there are significant stretches with no barrier and no settlements. (The block with red lines, dubbed Givat Eitam, due south of Bethlehem, is slated for Israeli construction, according to Peace Now’s map.) 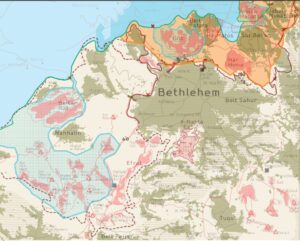 In December 2016, AP’s Isma’il Kushkush accurately referred to “the concrete barrier that surrounds part of Bethlehem.” While AP failed to amend its Dec. 9 article by Joseph Krauss and Mohammad Daraghmeh (“Palestinians in Bethlehem look beyond religious tourism”), Times of Israel commendably corrected in response to communication from CAMERA. The amended article now accurately states: “Bethlehem itself is partly surrounded by the barrier — a wall — and also by a string of Jewish settlements.”