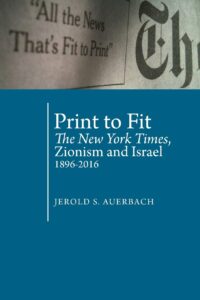 As a longtime media critic who closely follows the New York Times’ coverage of Israel and the Palestinian-Israeli conflict, I read Jerold Auerbach’s latest book, “Print to Fit: The New York Times, Zionism and Israel, 1896-2016,” with great interest.  Having spent almost two decades analyzing New York Times’ reporting about the Jewish state, I’m well-acquainted with the newspaper’s anti-Israel bias, which is an entrenched feature of its coverage.

The newspaper’s negative treatment of Jewish causes has a history that has been discussed before: In her 2005 book, Buried by the Times: The Holocaust and America’s Most Important Newspaper, Northeastern University journalism professor Laurel Leff described the Times’ shameful habit of burying news about the Holocaust at the back of the newspaper. Leff suggested that editors deliberately downplayed news about Nazi targeting and genocide of European Jews as part of a conscious effort by publisher Arthur Hays Sulzberger to ensure the newspaper would not appear “too Jewish.” Former New York Times Executive Editor Max Frankel similarly lamented “the staggering, staining failure of The New York Times to depict Hitler’s methodical extermination of the Jews of Europe as a horror beyond all other horrors in World War II” as Sulzberger “went to great lengths to avoid having The Times branded a ‘Jewish newspaper.’”

Print to Fit goes back even further, starting decades before the Holocaust. Auerbach’s contribution is to demonstrate through meticulous documentation just how much a part of its DNA is the New York Times’ animus against the Jewish state.  The author, a professor emeritus of history at Wellesley College, brings his historian’s eye to dissecting the newspaper’s long course of bias against the Jewish state, tracing it back to the purchase of the newspaper in 1896 by Adolph S. Ochs.

Ochs, the American-born son of Jewish immigrants from Bavaria, was an adherent of the American Reform movement of Judaism, whose prominent members and leaders — including Och’s own father-in-law, Rabbi Isaac Mayer Wise — were staunch opponents of the Zionist movement.  Ochs acquired the newspaper in 1896, the same year Theodor Herzl published Der Judenstaat, which proposed the restoration of an independent Jewish state in the Jewish ancestral homeland as a solution to global anti-Semitism.  The newspaper’s coverage of the nascent Jewish national movement was influenced by the “assimilationist ideology” of the Reform Judaism that Ochs embraced.

The prevalent attitude among the Reform movement at the time was that the “promised land” of the Jews was represented by America and that Jewish nationalism in the Holy Land was neither practical nor desirable. “Wary lest the Times be seen as a Jewish newspaper,” Auerbach observes, “Ochs guided its resolute affirmation of the patriotic loyalty of American Jews to the United States.”

Ochs was among the signatories of a statement published in the Times that cautioned against the “reorganization of the Jews as a national unit to whom, now or in the future, territorial sovereignty in Palestine shall be committed.”  And the newspaper provided a frequent platform to antagonists of the Zionist enterprise. The editorial policy at the Times echoed the views of its publisher who, Auerbach writes, “had long since determined that Judaism was a religion only, devoid of national content. Under no circumstances would Jewish nationalism be permitted to confront American Jews with the dreaded prospect of competing national loyalties.”

Working his way chronologically through the history of the Times and the times, Auerbach follows the evolution of Zionism through the Balfour Declaration and British Mandate, rise of Nazism and resulting Holocaust; establishment of a Jewish state in Palestine, the exercise of Jewish sovereignty and the state’s continuing fight for survival — as he analyzes the newspaper’s corresponding coverage and demonstrates how the anti-Zionist leanings of its publishers and journalists informed both the newspaper’s editorial pages and reporting on the issues.

Particularly enlightening to me was the chapter about Times foreign correspondent Joseph Levy who covered Palestine between 1928 and 1939.  I discovered that this first Jewish Jerusalem bureau chief was actually the prototype for many of the other Jewish (and non-Jewish) correspondents who came after him.

Born in the U.S. at the beginning of the 20th century and raised in Jerusalem which was at the time ruled by the Turks, Levy later served as secretary to the British governor of Jerusalem under the British mandate before becoming the New York Times “Palestine correspondent.”   His reporting, at first, stayed away from the politics of Zionism: Levy wrote about the cultivation of the land and cultural institutions of Zionists.  When Arab mobs slaughtered their Jewish neighbors in Hebron–incited by the bogus claims of Haj Amin Al-Husseini, the Grand Mufti of Jerusalem, that Jews were planning to seize Muslim holy sites–Levy reported sympathetically about the victims. Times publisher Adolph Ochs, on the other hand, blamed the violence and unrest on “Zionist activities in Palestine” as did the British-run Shaw commission set up to investigate the underlying causes of Arab rioting.

With the Arab street coalescing behind the Grand Mufti to agitate for a stop to Jewish immigration and for revoking the Balfour Declaration, and with the harsh attitude of the New York Times’ publisher, correspondent Levy soon became, in Auerbach’s words, “the Times conduit for the anti-Zionist consensus” composed of John Philby, “a disgruntled former British civil servant who had denounced the Declaration”; Judah Magnes, the Reform rabbi who headed the Hebrew University and adamantly opposed a Jewish state in Palestine; and the Grand Mufti  who was responsible for the campaign of  Arab violence against Jews in Palestine.  The journalist not only participated himself in “behind-the-scenes maneuvering,” privately engaging in discussion with the three afore-mentioned players, he also ensured that the Times would air their anti-Zionist views and serve as a platform for opponents of Zionism.

By 1931, Levy was writing about the Grand Mufti’s “intelligence” and “charm”.  And while he acknowledged that “the group of extremists headed by the Mufti” was partly to blame for the devolving situation in Palestine, most of Levy’s ire was aimed at Zionist leaders who rejected “diplomacy and tact” and “’inflated’ and wrongly interpreted the Balfour Declaration to mean that Great Britain promised Jews a return to their former glory in ancient Zion.

The violent Arab Revolt in Palestine (1936-39), which escalated from a general strike into murderous terror attacks against Jews, was started and encouraged by the Grand Mufti. Levy, however, held Jewish “extremists” responsible as he justified Arab frustration with them.  Auerbach quotes Levy’s articulated blame:

“Veteran observers all agree that the Revisionist Zionists have caused more harm to their co-religionist…than have any Arab terrorists.”

During a time of rising Nazism and anti-Semitism in Europe, when the need for a Jewish homeland was becoming ever more evident, the bias of Levy against the Zionist efforts of his co-religionists was flagrant.  Levy’s agenda-driven approach to reporting was a template for what was to come. Many of the Jewish Jerusalem bureau chiefs who succeeded him – Thomas Friedman, Deborah Sontag, Jodi Rudoren and most recently, David Halbfinger – have similarly promoted (through editorializing and spin) views antagonistic to Israel. As for the newspaper’s editorial crusade against a Jewish state, it too is the model for the editorials and op-eds through the decades that, until today, continue to blame Israel for the region’s ills.

Print to Fit is more than just a dossier of examples of the Times’ biased reporting and editorializing against Israel over 120 years. With extensive quotes from the newspaper’s publishers, it also provides a window into the underlying psychology that helped shape the institutional bias at the Times.

Adolph Och’s son-in-law, Arthur Hays Sulzberger, who succeeded him as publisher of the New York Times and was responsible for downplaying news of the Nazi slaughter of Jews, shared his father-in-law’s view of Zionism and perception of Judaism as a religion alone.

“I do not believe Jews are a race. I do not believe they are a people,” he is quoted as saying, expressing his view that Jewish adversity should not be overly emphasized. With a few exceptions, the unique victimization of the Jewish people was consistently downplayed in the newspaper’s coverage. Regarding Jewish refugees after the war, he insisted that “Judaism should be restricted to the religious ethical life, and that politics, or racialism, or nationalism have no part in it.” He faulted “Zionists” for focusing on the plight of Jewish refugees alone, rather than on all the people who were displaced following World War II.

The publisher’s overriding concern was that the newspaper not be perceived as overly concerned with Jewish matters. Throughout his tenure, Sulzberger was determined “’never [to] put a Jew in the showcase’ lest the Times be devalued ‘in Gentile circles.’” He insisted on placing in editorial positions only those whose names were “unmistakably Anglo Saxon.” Editors were instructed to refer only to “people of the Jewish faith” rather than “the Jewish people.”

The newspaper was eventually handed down from Sulzberger to his son-in-law and then, after his son-law’s death, to his son, Arthur Ochs (“Punch”) Sulzberger.  By the time a member of the next generation (Punch’s son, Arthur Ochs Sulzberger Jr.) took the reins in 1992, the publishing scion was no longer Jewish (having been raised in his Episcopalian mother’s faith) and the family’s obsessive avoidance of appearing too Jewish was no longer as compelling.   Even before that (during Punch’s tenure), Jews were allowed to assume editorial positions and head the Jerusalem bureau.  Still, the editorial approach at the newspaper regarding Israel did not significantly change over the years.  The discomfort with Jewish autonomy was never completely abandoned.  As late as the mid-1980’s, the non-Jewish, outgoing Jerusalem bureau chief, David Shipler, questioned why there remained a tacit editorial understanding whereby Israel would not be described as “a Jewish state” in the newspaper.

To be sure, during the New York Times’ long history, there have been accurate and impartial articles about Israel, and even occasional praise in  editorial commentary.  But the dominant mindset at the newspaper is one of enduring unease with Jewish nationalism and a Jewish state under the guise of espousing progressive and liberal values.  It is conveyed through emphasis on the views of Israel’s critics who are presented neutrally and dismissal of the views of its supporters who are presented as partisan and extreme.  It is expressed by focusing on Jewish military actions while downplaying Palestinian terrorism and violence, and by treating Palestinians and their leaders as victims alone, without agency and without responsibility for the ongoing conflict.  As Auerbach so aptly concludes:

All the news “fit to print” became news printed to fit New York Times discomfort with the idea, and since 1948 the reality, of a thriving Jewish democratic state in the ancient homeland of the Jewish people.

Print to Fit is a must-read for anyone who wants to truly understand the anatomy of biased  journalism at one of the foremost media outlets – the so-called “newspaper of record.”