At The Los Angeles Times, journalism is in smoking ruins, to borrow from the language of the June 7 page-one headline: “Gaza’s economy in smoking ruins.” The Times article, with the online headline of “In war-ravaged Gaza, it’s no business, as usual,” is not journalism as usual.
Journalism as usual mandates that reporters provide context. It also calls on journalists to “[d]iligently seek subjects of news coverage to allow them to respond to criticism or allegations of wrongdoing.” In addition, journalism as usual compels media outlets to “[a]cknowledge mistakes and correct them promptly and prominently. Explain corrections and clarifications carefully and clearly.” (See Code of Ethics of Society for Professional Journalists.)
But the “Gaza’s economy in smoking ruins” article, by Nabih Bulos and Hana Salah, does not abide by any of these criteria.
Featuring specific Gaza businesses harmed by the latest round of fighting between Hamas and Israel, the article fails to provide any information about the Hamas infrastructure that Israel’s military targeted in the Al Shorouq tower, the Karni Industrial Zone, and other locations identified in the story which were hit (or allegedly hit) by Israeli airstrikes. Without any information about the Hamas targets, the article leaves the false impression that the businesses themselves were the target. As one businessman quoted in the story tells it: “The Israelis targeted this place specifically. It makes you wonder why. This must be economic punishment and environmental destruction.”
Even as the article broadly acknowledges “Israel blames Hamas for embedding its bases and infrastructure near civilian areas,” it fails to identify the Hamas targets at the specific sites mentioned in the story. (In addition, contrary to the article’s suggestion, it’s not merely an Israeli charge that Hamas embeds its infrastructure in civilian areas. It’s a fact acknowledged by Hamas leader Yahya Sinwar.)
Moreover, the article gives a selective account of the airstrikes’ results, stating:

For its part, the Israeli military said its air and artillery strikes on Gaza hit more than 1,500 targets, a wave of devastation that has left hundreds of buildings as well as more than 1,800 commercial units destroyed or damaged, according to initial estimates from the economy and public works ministries in Gaza.

The May 21 statement by the Israel Defense Forces spokesman (as reproduced by the Meir Amit Intelligence and Terrorism Information Center) detailed that “During Operation Guardian of the Walls Israel destroyed more than 1,500 terrorist targets, severely damaging the strategic and tactical capabilities of Hamas and the PIJ [Palestinian Islamic Jihad].” (Emphasis added. While the IDF referred to 1,500 terrorist targets, The Los Angeles Times dropped that key word.) The IDF’s statement detailed the Hamas targets that were hit:

•  Hamas administration structures: Dozens of administration offices, 11 building belonging the internal security forces, and five banks used to transfer funds for terrorist activities were attacked. A senior source in the Hamas police force said that between 15% and 25% of the police management offices and most of its headquarters were partially destroyed (al-Aqsa, May 22, 2021).
• The terrorist infrastructure: The Israeli Air Force attacked dozens of bases, posts, command centers and nine multistory buildings where terrorist activity was coordinated. Prevention of attacks: Terrorist invasions were prevented, as were attacks from antitank missile squads, seven aerial threats (armed UAVs) and two naval threats (including attacks by unmanned submarine vessels). 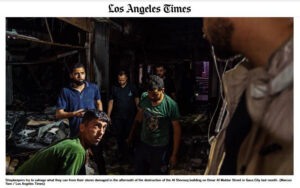 Indeed, some of the targeted terrorist infrastructure was located in Al Shorouq tower, which repeatedly appears in The Los Angeles Times story, in both photographs and text. (One of the four Al Shorouq-related images appearing in the digital article is at left.) About the Al Shorouq towers, Bulos and Salah report:

On Rimal Street, the Al Shorouq tower and its environs were home to dozens of smaller businesses, including Mutaz Khaled Ismail’s dental clinic. Believing in the power of location, the 27-year-old Egyptian university graduate bought an office unit in Hasniya, the building adjacent to Al Shorouq.
“I watched missiles bring down the first two parts of Shorouq. Then I went to take a shower, came back and saw the middle was destroyed,” he said.
When Al Shorouq was collapsed, it sheared off the wall of the Hasniya building, like a knife cutting through a layer cake, Ismail thought of the brand-new 600-pound dentist’s chair he had bought and would never use.
“I took a risk, and now the war destroyed everything,” he said. “I don’t know if I’ll stay or not. . . . “

Although the article dedicates four paragraphs to Al Shorouq’s destruction, it includes not one word about what Israel targeted at the site. According to the Israeli military, Al Shorouq

Indeed, the building housed Hamas’ Al Aqsa TV, which passes messages to terrorists and recruits them, and which airs calls for murder, including the broadcast days before the airstrike featuring Hamas leader Fathi Hammad urging viewers to buy 5 shekel knives and cut off the heads of Jews. Why is the information about Hamas’ activity at Al Shorouq omitted?
The correspondents likewise do not report what the Israeli military was targeting when businesses in other areas were harmed. For instance, was the agricultural pesticide factory hit when the Israeli military targeted a Hamas anti-tank missile launching post which earlier that day fired at an Israeli bus? Or was the target the Hamas tunnel shafts, which had also been hit in that area? Alternatively, were the businesses in the Karni industrial zone hit by one of the hundreds of errant Hamas rockets? The article does not investigate the latter possibility, and does not give any information about what the IDF was targeting had it indeed hit the industrial zone.
False Claim That Crossing Is Closed
Furthermore, in a grossly misleading passage, The Times falsely implies that Israel’s Kerem Shalom into the Gaza Strip crossing is closed, with no goods passing through:

“Now we can’t export or import. There’s been no mention as to when the crossing might reopen,” [businessman Ibrahim] Hassouneh said, referring to the Kerem Shalom crossing between Gaza and Israel, which normally allows a limited amount of goods to flow through.

In addition, the article notes:

This week, dozens of Egyptian trucks bearing aid containers entered Gaza, and Cairo has already pledged $500 million for reconstruction, with Egyptian firms expected to take part. That would require at least a partial lifting of the blockade, and would allow Egypt to monitor where materials were being used.

Contrary to Hassouneh’s statement, the crossing is very much open. In the same time period that dozens of trucks entered the Gaza Strip from Egypt, hundreds of trucks bearing aid entered the coastal territory via Israel’s Kerem Shalom crossing. Israel’s COGAT, Coordinator of Government Activities in the Territories, confirmed for CAMERA that just in the first week of June, 767 trucks crossed into the Gaza Strip from Israel through Kerem Shalom. As the United Nations’ Office for the Coordination of Humanitarian Affairs reported in late May:

The Kerem Shalom Crossing for goods remains open for the entry of specific basic commodities, including fodder, medical supplies, and supplies and fuel for the private sector and UNRWA.

Why does the article note dozens of trucks from Egypt while ignoring several hundred trucks from Israel?
Furthermore, while the article ostensibly spotlights the difficulties facing Gaza’s businesses, it egregiously overlooks the fact that Hamas repeatedly fired rockets at the crossings upon which the businesses depend.

״Hamas tries to create a false picture to the intr.arena by blaming Israel for not opening the crossings for aid. On one hand, Hamas shoots rockets at Kerem Shalom and Erez Crossings, and on the other hand, it enables the entrance through Rafah Crossing”said Col. Elad Goren > pic.twitter.com/npEHrAkCLf

Unemployment Uncorrected
As previously noted, journalism as usual also requires that media outlets acknowledge mistakes and correct them promptly. Yet, editors failed to correct a straightforward, clear cut factual error in the story about unemployment in the Gaza Strip, despite CAMERA’s correction request last week. Bulos and Salah err: “The unemployment rate hovers around 69%.”
The latest available statistics, published by the Palestinian Central Bureau of Statistics, show that in the first quarter of this year, unemployment in the Gaza Strip stood at 48 percent, not 69 percent.
Donate Now