Much of the mainstream media coverage of the Palestinian-Israeli conflict is marred by the attempt to fit breaking events into a pre-existing, simplistic narrative. According to this narrative, it is Israelis and their leaders who bear responsibility for the deteriorating situation in the region while Palestinians simply react to Israeli actions, their leaders helpless in a climate of escalating violence. When, on occasion, a journalist relaxes the strict narrative, it is usually to equate the two sides by falsely imputing a bilateral aspect to unilateral crimes. Rarely does the media hold Palestinians directly responsible for their own actions.

So when confronted with the barbaric massacre of peaceful Jews at prayer by Palestinian terrorists heeding their leaders’ call to action, how does the media react?

Two Palestinian terrorists, armed with meat cleavers, butcher’s knives and gun, charged through the back door of a western Jerusalem synagogue during prayers early Tuesday morning. Taking worshipers by surprise, the terrorists perpetrated a bloody massacre, attacking their victiims with axes and shooting to death four worshippers while seriously injuring seven others. They also attacked a policeman who later died of his wounds, before being killed in crossfire.

CNN initially headlined its story by lumping victims and terrorists together. 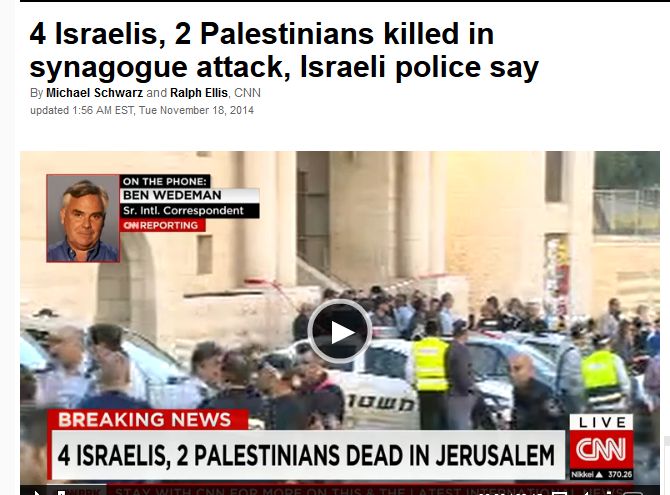 The ticker too converted the story into one of moral equivalence, in which both Palestinians and Israelis were equal victims in a wave of violence. CNN eventually apologized for the headline, but it was not the only one that reversed the story. In another gaffe, a CNN ticker referred to an attack on a Jerusalem “mosque.” 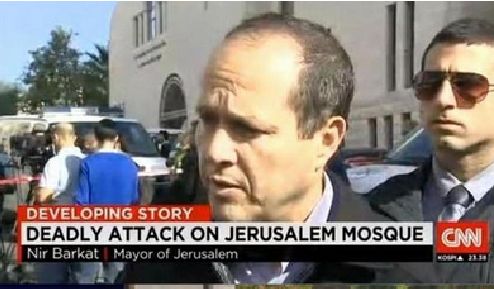 A different news segment and clip featured prominently on CNN’s web site provided Palestinian legislator Hanan Ashrawi with a platform from which to twist the story into one of Israeli culpability. In answer to a question about her reaction to the attack, Ashrawi stridently proclaimed:

Obviously the continuing escalation by the Israeli occupation and the targeting of Palestinian civilians and of course, the incursions into al Haram al Sharif , the noble sanctuary and the increased land theft and home demolitions generated the spiral of violence, and yesterday’s lynching of the Palestinian bus driver, as well as other incidents, particularly by settlers against Palestinian civilians have provoked the Palestinians to the point where many of them are retaliating individually through resorting to violence. We’ve been cautioning repeatedly against such irresponsible and dangerous policies. We’ve even said that Netanyahu was provoking a holy war by targeting Muslim holy sites and we said that such policies have to stop. Otherwise we will be plunged again into this spiral of violence…We need to deal with the root causes of the violence not just with the outcome, which is the Israeli occupation and its impunity.

It was not only Ashrawi who justified the attackers. CNN’s own Ashleigh Banfield took a page from Hamas’ script on justiying terrorism. On her show, “Legal View with Ashleigh Banfield,” where she interviewed international law expert Alan Dershowitz, Banfield posited:

Effectively there’s a philosophical war going on and soldiers come in all forms. And when you have mandatory conscription and service in Israel, effectively, the Palestinians will say, it’s war against every one because everyone is a soldier.

AFP’s Hazel Ward found it necessary and appropriate to interpolate an irrelevancy to suggest  moral equivalence:

Har Nof is also very close to the former Palestinian village of Deir Yassin where Jewish militias massacred more than 100 villagers in 1948.

The Washington Post, similarly invoked not only the massacre of Muslims by Israeli Baruch Goldstein 20 years earlier, but also the alleged massacre in Deir Yassin as a counterpoint to the massacre in the Har Nof synagogue, although the article was more circumspect in presenting the debated Palestinian claims as fact. According to the Post:

The synagogue is located in a neighborhood, Har Nof, popular with Americans and others undertaking studies in Judaism. But Palestinians refer to the area by its former name, Deir Yassin, an Arab village they say was attacked by Jewish paramilitary units in April 1948 shortly before Israeli statehood. Palestinians say scores of civilians were killed, but Israel denies such accounts.

The article did not similarly invoke the 1929 slaughter of Jews in Hebron and in Safed  by axe-wielding Arabs heeding a call by their religious leader to defend Muslim holy sites.  Unlike the article’s allusions to Jewish-perpetrated killings, the earlier massacres perpetrated by Arabs, regardless of their similarity to current events,  were apparently not deemed relevant to the story.

Fox News’ Conor Powell displayed an appalling ignorance in his “analysis” of the terror attack. Changing the story about  a brutal terrorist attack on innocent Israelis by Palestinian terrorists into one that attributes equal blame to both Israelis and Palestinians, Powell misinformed his audience:

There have been fights over religious spots here [in Jerusalem] and we’ve seen tit-for-tat violence on both sides here, and really what we’re seeing is that neither side is calling for calm. There have been escalations in the language that’s used here by both sides and there’s a real concern that we’re going to see violence here that we haven’t seen in more than a decade.

In fact, the recent spate of violence and escalated language has been remarkably one-sided. Palestinian President Abbas, as well as Hamas, have been calling on Palestinians to defend their holy sites, a specious Muslim battle cry that has historically resulted in the massacres of Jews in the holy land. Television broadcasts on Palestinian state TV, official Fatah Facebook postings, and speeches by Abbas himself have inflamed Palestinians with the false claim that Jews were defiling Muslim holy places. Palestinians were encouraged to defend Jerusalem. Within a few weeks, Palestinians heeding their leaders’ provocations have ploughed their cars into Israeli pedestrians, attacked  bystanders with crowbars, stabbed them and shot them, in an attempt to kill as many Israelis as possible. Over the past month, 11 Israelis were murdered and many more seriously injured in these attacks. There has been no similar incitement by Israeli leaders to attack Palestinians. Nor have any Israeli individuals attempted to murder Palestinian civilians with cars, axes, knives, or guns.

But that has not stopped journalists like Powell from trying to fit the story into the same, inaccurate mold of bilateral violence and incitement.

The attack at the synagogue has provoked extremist views on both sides, and there have been calls for all sorts of reactions to it today. Has there been any reaction on the [Israeli] street?

Connolly, to his credit, tried to set the BBC host straight by explaining:

I think I’d be cautious of the term “extremist” in terms of the [Israeli]reaction. People here are very shocked at the scale and the nature of the violence [of the synagogue attack.[

And in a TV segment of World Service News, an interviewer tried to censor Israeli politician Naftali Bennett from displaying a photograph of one of the dead Israeli victims of the synagogue slaughter. Following a Palestinian interviewee who had claimed that it is Israelis who are murdering Palestinians, Bennett blamed Palestinian president Mahmoud Abbas for inciting Palestinians to fight the Jews. He held up a photo of an Israeli victim in a prayer shawl lying on the ground, and said, “You know, this individual came this morning to pray.”  He was immediately interrupted by the interviewer. “We don’t want to actually see that picture,” she insisted. “If you could take that down.”

Very few media outlets have covered the glorification by Abbas and Fatah of the terrorists who killed and wounded Israelis in recent attacks. Most of the perpetrators were residents of Jerusalem. They made no secret of the fact that they were encouraged to carry out their attacks in order to “defend” Jerusalem, supporting the charge that Abbas and his cohorts promoted the violence.

But while The New York Times emphasized Palestinian President Abbas’ semi-condemnation of the synagogue attack (which was immediately explained away by his Fatah party as just an expedient political lie) , it has cast the inflammatory words and increasing incitement by the Palestinian leader, his Fatah party and official media as nothing more than an allegation by Israeli leaders.

NBC’s Katy Tur did the same.  She asserted:

Although President Mahmoud Abbas condemned the whole cycle of violence, Israeli leaders are accusing him of inciting just this kind of assault.

Nor did most media outlets cover the celebrations by Palestinians of the bloody synagogue murders. That in itself constitutes incitement and promotion of terrorism. Given the reluctance of  so many journalists and editors s to confront the reality of events and tell the full story,  it is not surprising that so many media outlets have lost their credibility among serious news consumers.