As Reuters and the Associated Press tell it, the Sheikh Jarrah story is a simple one. The players fill clearly delineated roles: The Palestinian families stand in a united front against Israel’s usurping settlers.

It’s a tidy narrative. Palestinian residents of Sheikh Jarrah facing eviction from their homes where they have resided for decades uniformly reject compromise with Israeli settlers who claim ownership of the properties. 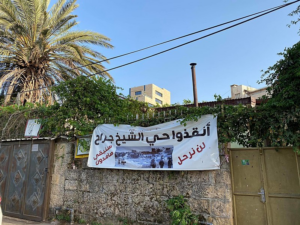 A banner opposing evictions in Sheikh Jarrah, May 2021 (Photo by Osps7/Osama Eid Wikimedia)

In fact, as is often the case, the story is a bit more messy than that. It turns out that within the Palestinian community in Sheikh Jarrah there is discord — not unity — about how to respond to the compromise proposed last month by Israel’s Supreme Court. Moreover, as reported by multiple Israeli media outlets, residents who initially chose to accept the deal in which their continued residency would have been guaranteed for at least another 15 years caved in the face of pressure and intimidation by Palestinian officials and neighbors.

There has been growing friction recently between residents of the East Jerusalem neighborhood who favored accepting the offer and those who preferred to reject it.

“We’re under huge pressure,” one of the residents facing eviction said. “We aren’t sleeping and don’t want to battle with everything around us. The talk is that if you’ve paid the settlers, then you are a traitor and that’s it. You’re finished. So in the end, we refused the offer.”

Hours before the expiration of the deadline, however, Palestinian sources said seven other families also threatened with eviction in Sheikh Jarrah had accepted the compromise, according to which they would be recognized as “protected tenants.”

The compromise offer split the Palestinian families, who were unable to reach a consensus for weeks.

“There were extensive discussions. We’ve spent a month talking it over, every single day. Now we’ve reached a decision to reject it,” said Abdelfattah Eskafi, one of the Palestinians threatened with eviction.

Residents faced overwhelming external pressure to reject the deal, with both the Palestinian Authority and Hamas decrying the proposal.

Hamas chief Ismail Haniyeh held a phone call with the Sheikh Jarrah families last week calling on them to refuse the proposal.

“We will not allow the occupation courts to extract by trickery what they were unable to extract in a war. You do not need to deal with their offers, as they are an illegal entity on our land,” Haniyeh said, according to his office.

But, in the wire service stories, there is not a word about the neighbors’ split. To the contrary, Reuters’ coverage presents the picture of a united front among the residents, stating (“Palestinians facing Jerusalem evictions reject deal with Israeli settlers“):

“We unanimously rejected the settlement offered by the occupation (Israeli) court,” Muna El-Kurd, one of the Palestinians facing eviction, said at a press conference.

“This refusal comes from our faith in the justice of our case and our rights to our homes and homeland,” said El-Kurd, wearing a jacket embellished with the words “No Fear”. She was flanked by other residents.

Reuters’ Nuha  Sharaf and Zainah El-haroun report only the ultimate “unanimous” rejection, ignoring the intimidation and pressure brought to bear in the name of “unity.”

The internal Palestinian conflict isn’t the only element stripped from the contrived neat narrative.

Seeking a compromise, Israel’s Supreme Court in October proposed a deal that would have seen four Palestinian families remain in their homes for 15 years as “protected tenants” while paying rent to settlers who claim the land.

The AP also notes that the compromise requires the Palestinian residents to “pay rent to the settlers.”

Notably, though both foreign media outlets saw fit to report the rent requirement, neither bother to disclose the notable amount of rent: approximately $62.50 a month, a sum so low it gives new meaning to “rent control.”

“Each family will deposit yearly rent of 2,400 shekels [$750] in the account of the counsel of the Nahalat Shimon Co. The payment will be deposited every year in advance beginning January 1, 2020 and every January 1 thereafter,” according to the plan.

But, in a narrative where the Palestinian residents are the owners of the homes, any rent — now matter how low — is objectionable.

The settlers are making use of an Israeli law that allows them to claim properties that were owned by Jews prior to the 1948 war surrounding Israel’s creation. Palestinians who lost homes, properties and lands in the same conflict do not have the right to recover them. . . .

The families, who are originally from what is now Israel, say the Jordanian government granted them the land on which their homes were later built in exchange for their refugee status after it assumed control of the West Bank and east Jerusalem in 1948.They have been living there ever since.

Unfortunately for the Palestinian residents, Jordan never registered the properties in their names. This fact, concealed by the news agencies, deprived the residents of any ownership claims and the reporters of a clean narrative. While the latter issue is overcome by selective reporting, the former is not nearly as surmountable.

(AP’s allegation about a disparity in the law regarding Palestinians and Jews who lost properties in the 1948 war is a tired canard, as detailed by CAMERA’s Alex Safian.)

The simplistic AP/Reuters narrative on Sheikh Jarrah, in which monolithic Palestinian residents in perfect harmony fend off dispossession by Israeli settlers belongs to the so-called “contextualized truth” of “Israel’s systematic oppression of Palestinians” hailed by hundreds of journalists last spring. In other words, it’s an affront to ethical journalism.