While British Jewry is overwhelmingly united around the belief that Jeremy Corbyn has grossly mishandled antisemitism in the Labour Party, The New York Times falsely alleged last week that an unprecedented column by British Chief Rabbi Ephraim Mirvis slamming the party leader as “unfit for high office” has “generated fierce debate among British Jews.”
Benjamin Mueller, a Britain correspondent for The Times, reported Nov. 26:

The chief rabbi’s rebuke instantly generated fierce debate among British Jews, with some seeing it as reflecting their fears of Labour and others saying that he did not speak for them. (“U.K. Chief Rabbi Denounces Labour Party on Anti-Semitism“) 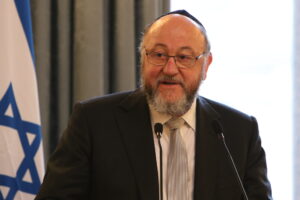 The notion that the British Jewry is somehow deeply divided over Rabbi Mirvis’ column is totally unfounded. That Jeremy Corbyn has miserably failed to counter antisemitism in his party is a consensus sentiment among Britain’s Jews. A 2019 Survation poll carried out for the Jewish Leadership Council found that 87 percent view Corbyn himself as antisemitc.
Indeed, Mueller failed to cite any evidence of “fierce debate” because there is none. The only British Jewish source (besides Mirvis) that Mueller actually quoted in his story – on either side of the so-called “debate” – is a statement from an extremely marginal organization founded within the last couple of months in response to the snap elections. Mueller cited Jews Against Boris, a tiny, new fringe group that besides this The New York Times story appears just once in a major world paper in the last five years, according to Lexis-Nexis news database searches. (On Nov. 26, The Guardian mentioned a tweet by this new group, which opened its Twitter account only in October 2019, and which boasts just 1,200 followers).

What evidence is there of “fierce debate among British Jews” around chief rabbi’s condemnation? Y does Times devote 4 graphs to fringe group (Jews Against Boris) & fail to name even 1 mainstream org? @LabourAgainstAS @CAMERAorg pic.twitter.com/ncBPLQaq3E

In contrast, The Times did not  quote even one of the major mainstream establishment organizations representing British Jewry  – not the Board of Deputies of British Jews (founded centuries ago, in 1760, with some 23,300 Twitter followers), not the Community of Security Trust (nearly 23,000 Twitter followers), and not the Jewish Leadership Council (nearly 16,000 Twitter followers.) These leading organizations, in contrast to Jews Against Boris, each appear in several hundred media reports in major world newspapers over the last five years. They all have websites, offices, employees, and boards of directors. It’s not clear that the two-month old miniscule, fringe Jews Against Boris have any of these markings of establishment. And yet Mueller devoted four paragraphs to the group and unnamed critics of Rabbi Mirvis’ column. He writes:

But some British Jews also criticized the way Labour’s political opponents were putting Rabbi Mirvis’s words to use. Not all British Jews recognize the chief rabbi as the leader of their communities.

And some people warned that Rabbi Mirvis had sidestepped a greater threat posed to Jews and other British minority groups by Prime Minister Boris Johnson, who has himself been accused of making racist and Islamophobic remarks and energizing parts of the far right similar to those responsible for recent attacks on Jews in the United States.

“We understand why so many in our community feel unable to vote for the Labour party, however we must not make the mistake of thinking the Conservatives are a safer alternative,” an organization called Jews Against Boris wrote on Twitter. “This is a party which is courting nationalist votes by demonizing and threatening minorities, and undermining the rule of law. The idea that this would be a safe environment for Jews is incredibly dangerous.”

The group, modeled in part on the efforts of American Jews to organize against President Trump, said keeping British Jews safe meant standing in solidarity “with all other communities experiencing oppression.”

The Board of Deputies came out with a statement backing Rabbi Mirvis’ column (“Leading figures back Chief Rabbi’s unprecedented plea over Labour antisemism“). The Jewish Chronicle quoted Vice-President Amanda Bowman was quoted:

“This is an unprecedented call from the Chief Rabbi that is sadly reflective of how many British Jews feel.

“They are fearful that if Labour has allowed antisemitism to take hold in this way while in opposition, that things will become worse if they are in government. Jew-baiters are being protected by Labour’s opaque and factional disciplinary process, while Jewish MPs are being hounded out of the Party with not a word of protest from Jeremy Corbyn.

“If this combination of disdain, injustice, incompetence and malevolence is how Jeremy Corbyn’s Labour Party treats a serious issue like anti-Jewish racism, voters are entitled to question how it will handle the other big issues that face the country.”

In the event that Mr. Mueller missed The Chronicle story, he could have easily have asked the Board of Deputies, or the Community of Security Trust or the Jewish Leadership Council for comment, just like he approached Jews Against Boris soliciting a response.

@JewsAgainstBoJo Hi, I’m a reporter in London for The New York Times, writing about anti-Semitism and the election. Hoping to chat — I’m on [email protected] or on DM too. Thanks.