In April 2017, The New York Times published an Op-Ed by “Palestinian leader and parliamentarian” Marwan Barghouti who wrote that he was serving multiple life sentences after being subjected to “a political show trial.” Liz Spayd, The Times’ public editor at the time, rebuked her paper for failing to disclose to that an Israeli court convicted Barghouti for five counts of premeditated murder and membership in a terror organization (“An Op-Ed Author Omits His Crimes, and The Times Does Too“):

I have written before on the need to more fully identify the biography and credentials of authors, especially details that help people make judgments about the opinions they’re reading. Do the authors of the pieces have any conflicts of interest that could challenge their credibility? Are they who they say they are, and can editors vouch for their fidelity?

I see no reason to skimp on this, while failing to do so risks the credibility of the author and the Op-Ed pages.

While the initial neglect to include that key biographical information was deplorable, Times editors did subsequently append an editor’s note to the bottom of the digital article, noting the convictions and the fact that the opinion piece “neglected to provide sufficient context [for the prison sentence] by stating the offenses of which he was convicted.” At the time, a hyperlinked note prominently appearing at the top of the article drew readers’ attention to the important editor’s note at the bottom. (The note at the top has since disappeared.)

But that was in 2017, and a great deal has changed at The New York Times. First, the paper no longer employs a public editor. Just one month after Spayd criticized the paper for its lack of transparency about Barghouti’s crimes, she was out the door.

According to Politico, some staffers objected to her “overly critical columns about the paper’s news coverage.” In addition, there was also the sentiment that the media outlet’s direct communication with readers via Twitter obviated the need for a public editor. As publisher Arthur Sulzberger Jr. put it: “our followers on social media and our readers across the Internet have come together to collectively serve as a modern watchdog, more vigilant and forceful than one person could ever be.”

Second, the paper apparently no longer sees the need to update with more biographical information once it becomes apparent that the details provided are insufficient. 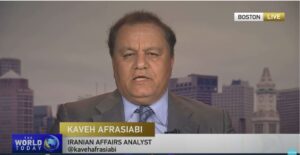 Take the case of Kaveh Afrasiabi, who has contributed two Opinions pieces to The Times on the controversial Iranian nuclear deal, delivering a decidedly favorable view of Islamic republic. In his biographical information attached to his Op-Eds, The Times identified Afrasiabi as a political scientist and expert on Iran’s foreign affairs (“Trump and Rouhani Need to Talk,” 2018) and “a former political science professor at Tehran University and former adviser to Iran’s nuclear negotiation team” (“Gathering Hope in Tehran,” 2012).

Earlier this month, the U.S. Justice Department identified the same Afrasiabi as an unregistered agent of the Iranian government.

The U.S. authorities arrested and charged Afrasiabi, a legal resident of Massachusetts, for his violations of Foreign Agents Registration Act (FARA), allegedly having received $265,000 since 2007 plus health benefits since 2011 in exchange for his undeclared lobbying on behalf of the Islamic Republic of Iran.

“Anyone working to advance the agenda of a foreign government within the United States is required by law to register as an agent of that country,” the Justice Department press release quoted FBI Assistant Director in Charge William F. Sweeney.  “Mr. Afrasiabi never disclosed to a congressman, journalists or others who hold roles of influence in our country that he was being paid by the Iranian government to paint an untruthfully positive picture of the nation.  Our laws are designed to create transparency in foreign relations, and they are not arbitrary or malleable.  As today’s action demonstrates, we will fully enforce them to protect our national security.”

Given that Times editors were likely unaware that Afrasiabi allegedly illegally concealed his paid work on behalf of Iran when they published his columns, important questions arise: to what degree does a media outlet have a commitment to second guess and verify the credentials that an opinion contributor supplies? What safeguards does The Times have in place to ensure that contributors are truthfully identifying their relevant affiliations?

Moreover, it is deeply troubling that nearly two weeks after the Justice Department released the explosive news about Afrasiabi, The New York Times has yet to address the issue. It has not published an article or made a statement about the fact that a former contributing writer has been arrested for being an illegal agent of Iran. Nor has it appended any note to Afrasiabi’s op-eds informing readers that the Justice Department has charged him with being an undeclared paid Iranian lobbyist, and that the earlier representation of him as a detached observer are apparently incorrect.

U.S.-Iranian relations are at this moment at a critical juncture. President Joe Biden’s freshly installed Iran team, headed by the controversial Robert Malley, is tasked with deciding if and how to return to the Iran deal which the Trump administration had abandoned, and Tehran just rejected new negotiations after French President Emmanuel Macron announced that time is very limited to reenter talks is highly limited before Tehran succeeds in obtaining nuclear weapons.

A September 2018 Gallup poll carried out on behalf of the John S. and James L. Knight Foundation’s Trust, Media and Democracy initiative, identified transparency as a key factor in determining news consumers’ trust in the media, with 71 percent of respondents indicating a commitment to transparency is very important.

Contrast The Times’ ongoing silence on the Afrasiabi to that of National Public Radio when it too faced a conflict of interest/failure to disclose scandal on Iran.

A 2016 Associated Press investigative report revealed that Ploughshares Fund, identified by Obama administration official Ben Rhodes as a key cog in the White House’s “echo chamber” selling the American public on the Iran deal, provided NPR with $100,000 to cover the deal. NPR did not share with listeners the fact that a partisan organization with a heavy stake in the controversial deal contributed to its reporting.

The very day that AP’s expose appeared, NPR retroactively added a disclosure to a 2015 broadcast which had argued that “nuclear experts remain optimistic about Iranian negotiations.” The belated disclosure states: “This report should have stated that Ploughshares Fund is a supporter of NPR’s coverage of nonproliferation and national security issues.”

In an extensive examination of the affair, NPR’s then ombudswomen Elizabeth Jensen argued that Ploughshares’ contribution did not impact the impartiality of NPR’s coverage. (Verification of her assessment is beyond the scope of this article). But she also made this point: “Sometimes journalists face a conflict of interest in their reporting. Other times it is the perception of a conflict, which can be just as problematic.”

When reporters and producers book a guest, the guest should be asked to disclose whether he or she is funded in a way that might be a conflict NPR needs to know about. The senior supervisors for each reporting desk and each show are responsible for making sure that any conflicts are then properly disclosed.

Because that process broke down in the case of Ploughshares, [senior vice president of news and editorial director Michael] Oreskes said, NPR is conducting a review of its safeguards.

“[T]he firewall was not breached in this case,” concluded Jensen, “but the damage that happened from perception is just too great a risk to NPR’s reputation.”

The New York Times, unlike NPR, did not publish an immediate belated disclosure or any introspective piece about where the system might have broken down; it has not disclosed to its readers the usual process for ensuring transparency; and if it has conducted a review of its safeguards, it has not made that information known.

The Gray Lady has abandoned transparency on the Afrasiabi case. In doing so, it tells its readers, those digitally-adept Twitter users who supposedly supplanted the public editor: Get lost. We couldn’t care less what you think.