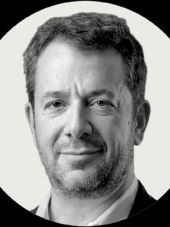 The first interview, on June 5th (“New Palestinian Premier Warns of a ‘Very Hot Summer”) with the new Palestinian Authority prime minister, Mohammed Shtayyeh, was the dictionary definition of a puff piece, showering the Palestinian premier with commendation as a man of honor serving his people – and avoiding any challenging questions. His many grievances against Israel and America were conveyed as reasonable and justified and were bolstered by the reporter as truth.

The second interview, on June 9th (“Israel Has Right to Annex at Least Parts of West Bank, U.S. Envoy Says”) with the U.S. ambassador to Israel, David Friedman, was the opposite. It was a scathing, extended critique of America’s policy regarding Israel and of its emissary to the Jewish state. The reporter, in his own voice and invoking various critics, faithfully echoed Palestinian grievances, presenting the ambassador as one-sided and unfair.

The bias is apparent from the lede of each story, which frames the Palestinians and Israel in clichéd roles. The Shtayyeh interview opens with familiar rendering of Palestinians as hapless victims of Israel and the U.S.:

Pressured by the Trump administration, confronted with Israeli talk of annexing the West Bank, increasingly isolated in the Arab world and running out of money, the beleaguered Palestinian Authority is staring at what its new prime minister acknowledges could be its own demise. [emphasis added]

The Friedman interview introduces Israel as the aggressor obstructing peace:

Israel has a right to annex at least some, but “unlikely all,” of the West Bank, the United States ambassador, David M. Friedman, said in an interview, opening the door to American acceptance of what would be an enormously provocative act. [emphasis added] 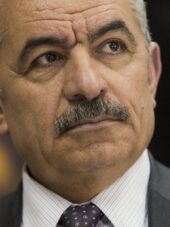 Prime Minister Shtayyeh is depicted as a peace-seeker, a man-of-the people and a victim of Israel, with much friendly detail embellishing his background and history:

Mr. Shtayyeh, 61, was a top economic-development official and an occasional participant in peace talks with the Israelis before being appointed to the No. 2 job in the Palestinian Authority in March. His boss, President Mahmoud Abbas, is in his 80s and in poor health. Since then Mr. Shtayyeh has set about trying to increase public confidence in the authority, while also showing a common touch, as if he hoped to be a candidate to succeed Mr. Abbas. But he starts his job facing an immediate financial crisis…

A stalwart of Fatah, the secular nationalist party that dominates both the Palestine Liberation Organization and the Palestinian Authority, Mr. Shtayyeh took over a largely technocratic post that executes policies set by Mr. Abbas.…

…A Nablus native, he came of age leading Fatah demonstrations against Israel as a student and then as a teacher at Birzeit University. He said he was arrested and badly beaten by Israeli soldiers twice, in 1977 and 1978.

…Since he started the job, he has fostered a popular image unlike that of his predecessors. He was photographed walking to work, dispensed with his predecessor’s long motorcade, quit his other posts and banned first-class travel for ministers. He attended a Ramadan iftar, or break-the-fast meal, at a refugee camp. And he demanded that his underlings show tangible improvements in services within 100 days. [emphasis added] 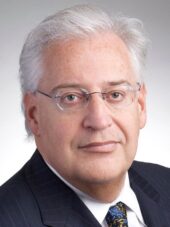 Ambassador Friedman, by contrast, is presented much more briefly, and in far less likable terms. He is described as nothing more than a biased Trump man who supports Israeli settlements – something that’s repeated twice. At another point, settlements are said to violate international law:

Mr. Friedman, 60, who before taking his post was Mr. Trump’s top bankruptcy lawyer and a generous supporter of the Israeli settlement enterprise, is said to be a driving force within the administration’s Middle East team, which also includes Jared Kushner, Mr. Trump’s son-in-law and senior adviser, and the special envoy Jason Greenblatt, a former in-house counsel at the Trump Organization.

… A major American supporter of the Israeli settlement enterprise before his appointment, Mr. Friedman has seldom been accused of being evenhanded as ambassador. [emphasis added]

Halbfinger relays Shtayyeh’s claims as reasonable and straightforward facts – and even inserts links in the online version to bolster the Palestinian’s words. For example:

He [Shtayyeh] cited a litany of moves by the Trump administration that favored Israel, including moves to strip millions of Palestinians of their refugee status, recognizing Jerusalem as Israel’s capital and abandoning the pursuit of a two-state solution based on the June 1967 armistice lines.

These are allegations and should be reported as “claims” – not a de facto “litany of moves.”

Halbfinger explains none of this and lets Shtayyeh’s distorted assertions stand totally unchallenged.

A Hand Up for the Palestinians

Israel and Western countries see those payments [by the PA to Palestinians imprisoned for terrorism against Israel], which began in the 1960s, as incentivizing terrorism. But the Palestinians see them as a vital form of welfare that rewards the sacrifices made by freedom fighters and their families, and say that many prisoners had no part in violence and did not receive fair trials. Unilateral deductions by Israel, they say, violate the agreements under which Israel collects revenue for the Palestinians. [emphasis added]

By contrast, Halbfinger conceals rebuttal to numerous assertions by Shtayyeh, who is quoted, for instance, saying:

The Times reporter refrains from the obvious clarification that the U.S. Embassy move to western Jerusalem has no relevance to future negotiations and was, as many have noted, an implementation of the 1995 Jerusalem Embassy Act. He allows Shtayyeh’s bogus accusation to stand unchallenged.

Similarly, Halbfinger relays without clarification that Shtayyeh said that should the Palestinian Authority collapse, “even Palestinian recognition of Israel could be called into question.”  Yet President Abbas has repeatedly and vehemently asserted that he will never recognize the Jewish state of Israel.

Moreover, Shtayyeh himself has vowed that any solution to the conflict would have to include the “right of return of [Palestinian] refugees” into Israel, which he has falsely claimed is “based on United Nations resolutions and international law.”   While there are calls to resolve  the refugee problem caused by the illegal war  by Arabs to annihilate Israel in 1948, there  is no UN resolution nor international  law that grants Palestinian refugees the right to return to Israel (see here and here).  The insistence of a so-called “right of return” for Palestinians to homes their ancestors fled due to a war of aggression  launched by their leaders, coupled with the refusal to recognize Israel as a Jewish state within any borders is a veiled attempt to eliminate the Jewish state by altering its demographics. It evokes former Palestinian leader Yasir Arafat’s “phased” strategy for ultimately taking over the Jewish state. This is spelled out in the Palestine National Council’s 1974 ten point program, known as the “Phased Plan” for Israel’s destruction. Its basis is to first create a Palestinian state on any territory that is handed over by Israel (Article 2) and then to use that state to “complete the liberation of all Palestinian territory.” (Article 8).  This is the underlying cause of the failure of peace efforts.

The Times reporter, however, avoids questioning Shtayyeh about  this or, indeed, mentioning this sensitive topic.

Shtayyeh elsewhere decries American contributions to peace efforts, especially to betterment of Palestinians’ economic conditions and quality of life, claiming, “nothing has materialized” for them from the Reagan era to the Obama administration.

Halbfinger remains silent in the face of this ludicrous, false characterization of both direct U.S. largesse and the many efforts, especially in the context of Oslo, to promote economic activity. America has, of course, given billions of dollars to the Palestinians. Likewise, the vast improvement in the quality of life for Palestinian Arabs – in health, longevity and education – has been widely documented.

Halbfinger’s silence in the face of such absurdity is testimony to his willingness to allow the Palestinian side to claim anything, however baseless.

The Back of the Hand to Israel

By contrast, Israel’s perspective and justification for retaining some settlements is not given any space in Halbfinger’s interview. It is condemned by Halbfinger in his own voice and by citing Israel’s critics.

In his own voice, Halbfinger editorializes that retaining settlements “would be a provocative act” and later that it “would violate international law and could be a fatal blow to a two-state solution.”

He reinforces this view by citing “much of the world”:

Much of the world considers Israeli settlements there illegal and would view annexation as compounding the crime. Israeli critics, including a group of respected former military and national-security officials, warn that annexation could lead to violence and require the military to occupy Palestinian urban areas for the first time in decades.

Unlike Halbfinger’s citing Palestinian perspectives as the last word to counter any negative accusations, he includes no alternative Israeli perspectives even after inserting his own voice to join with Israeli critics. There is nothing about how annexing settlements with land swaps has long been the basis of negotiations in the past and does not diverge from U.S. policy under the Obama administration nor from any of the Oslo agreements or UN Resolution 242.

Nor, needless to say, is there any reference to other eminent legal experts in the “world” who argue for the legality – if not the political advisability – of settlements.]

The Times’ recent publication of a grotesque antisemitic cartoon that drew global attention eventually elicited editorial mea culpas along with musings about the publication’s notorious failure to cover the Nazi genocide against the Jews. Nothing, however, in any of that self-reflection acknowledged the shoddy, anti-Israel coverage that today, virtually every day, deceives millions of readers.