Weeks after Israel’s COGAT, Coordinator of Government Activities in the Territories, refuted the false story that Aisha a-Lulu died alone at a hospital in Jerusalem because Israel refused to grant her parents exit permits to accompany her for medical treatment, an Associated Press headline pushes the debunked narrative. 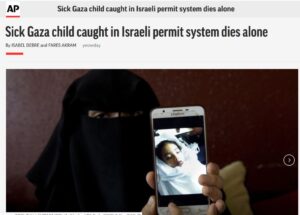 As her condition deteriorated, the child was returned to Gaza unconscious. One week later, she was dead.

“Contrary to reports, Aisha a-Lulu passed away in the Gaza Strip after having returned to her home approximately two weeks ago after surgery, which unfortunately did not succeed in the Al-Maqasid Hospital [in Jerusalem],” the statement said.

In addition, The Post reported that COGAT also debunked claims that Israel denied her parents entry to accompany her to the Jerusalem hospital:

“Israel approved the entry into Israel of the child Aisha a-Lulu for medical treatment in a hospital in east Jerusalem after her parents signed a waiver, according to which they did not wish to leave the Gaza Strip with her,” COGAT said. “We emphasize that CLA [Coordination and Liaison Administration] Gaza policy requires parents to escort their minor children for medical treatments, based on the understanding that children need their parents in moments such as these.”

“However, in this case, Aisha’s parents did not wish to accompany her and therefore, in accordance with CLA policy, they were requested to sign a declaration that they choose not to escort their daughter during the course of her treatment, due to their own choice, and request that another party on their behalf escort her,” COGAT said.

CAMERA’s Israel office contacted the Associated Press to point out that the contradiction between the (false) headline and the accompanying text and to request correction of the headline. AP declined to correct.