Patrick Kingsley’s March 2 New York Times article (“The Israel Election (Round 3): Here’s What You Need to Know“) inaccurately reported about President Trump’s “Peace to Prosperity” plan: “Israeli settlers said it did not annex enough Palestinian land.”
Far-right settlers who oppose the Trump plan have not said that the plan “did not annex enough Palestinian land,” precisely because they do not regard West Bank land as Palestinian. (Emphasis added.) Moreover, The Times’ designation of the disputed West Bank as “Palestinian” is a violation of impartiality. Since 1967 and until the Trump plan, the West Bank’s status was to be resolved by negotiations anticipated by U.N. Security Council resolutions 242 (1967) and 338 (1973), the 1995 Israeli-Palestinian interim accords, the 2003 international “road map” and related diplomatic efforts taking 242 and 338 as reference points. The co-authors of resolution 242, U.S. Under Secretary of State Eugene Rostow, U.S. ambassador to the United Nations Arthur Goldberg, and British ambassador Lord Caradon made clear at the time and subsequently that Jews and Arabs both had claims in the territories, no national sovereignty over the territories had been recognized since the end of Ottoman rule and negotiations would be necessary to resolve competing claims.
Indeed, in no time in history was the West Bank “Palestinian land,” until the Oslo Accords put certain areas (called Areas A and B) under control of the Palestinian Authority. All of the land currently under Palestinian Authority control will remain so under Trump’s plan. (The hyperlink on the phrase “said it did not annex enough Palestinian land” links to a Feb. 27 article by Isabel Kershner which does not support the claim that settlers “said” anything about “Palestinian land.” Rather, some settlers expressed fears about Israeli enclaves being surrounded by a Palestinian state, referring to the fact that the plan allows for greater Palestinian control in the West Bank, in which the expanded territory under Palestinian Authority control plan would comprise the future State of Palestine.) 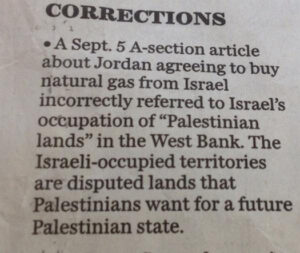 The Washington Post in the past has commendably corrected an erroneous reference to West Bank land as “Palestinian land.” The Sept. 6, 2014 correction noted:

A Sept. 5 A-section article about Jordan agreeing to buy natural gas from Israel incorrectly referred to Israel’s occupation of “Palestinian lands” in the West Bank. The Israel-occupied territories are disputed lands that Palestinians want for a future state.