On April 22, the New York Times carried yet another full page ad by the Council for the National Interest (CNI) portraying Israel as a brutal apartheid state and an obstacle to peace in the region. The ad praises former President Jimmy Carter’s recent book accusing Israel of instituting apartheid policies in the West Bank and Gaza, offering distorted and false information to support his charges. While condemning the Middle East’s sole liberal democracy, the ad presents a conciliatory view of tyrannical regimes in Iran, Syria and the Palestinian Authority. Unsurprisingly, in light of the long associations of CNI members with Saudi Arabia, the ad includes warm praise for the king of the family-run kingdom. 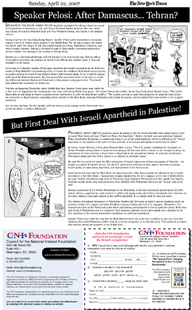 advocacy group to turn public opinion away from support of Israel. CNI is known for peddling the image of a nefarious Jewish lobby dictating American foreign policy against America’s better interests in the Middle East, and the recent ad doesn’t disappoint in this regard. CNI’ s agenda reflects the views of its founder, ex-Illinois representative Paul Findley , a bitter foe of Israel and the Jewish community, who blames the pro-Israel lobby for costing him his congressional seat. Findley and fellow CNI founder, former representative Pete McCloskey, espouse a conspiratorial view of the influence of the “Jewish lobby” long pervasive among the anti-Semitic lunatic fringe, but recently popularized by professors Mearsheimer and Walt and former President Jimmy Carter.

The ad uses inflammatory language to excoriate Israel’s security barrier as “brutal oppression,” but neglects to mention that the barrier was built specifically to stem the flow of Palestinian suicide bombers into Israel — and has succeeded in helping to dramatically reduce casualties. The barrier is described as an “intimidating wall, built on Palestinian land,” when in reality 95% of it is a fence, and most of it adheres closely to the contours of the 1949 armistice lines (the so-called Green Line).

Israeli actions in the West Bank are similarly distorted; by-pass roads are incorrectly labeled as “settler only” when, in fact, all Israelis, Jewish and Arab, can use them. The settlements are described as “a simple grab for land and water,” obscuring the reality that under Israel’ s administration of the territory water resources available to the Palestinians have increased sharply.

The ad blames increasing Palestinian unemployment on U.S.-imposed sanctions, ignoring the fact that the downturn in the Palestinian economy began in 2000 when the Palestinians abandoned any pretense of peaceful economic cooperation with Israel by launching the second “intifada.”

CNI’s grossly distorted portrayal of Israeli policy and the Israeli-Palestinian conflict is consistent with its longstanding animus towards Israel and its cozy relationship with Arab terrorists and anti-Semitic groups. In early 2006, for example, CNI leaders met in Damascus with Hamas chieftain Khaled Meshal as well as with Syrian president Bashar al-Assad. An earlier CNI advertisement in the New York Times described Hamas as “a typical anti-colonial insurgency responding to an Israeli occupation and what amounts to government terror against Palestinian civilians.”

CNI and its sister organization, the Council for the National Interest Foundation (CNIF), have maintained close ties with individuals linked to Islamic terror groups. Former CNIF Board Member Abdurahman Alamoudi, an open supporter of Hamas and Hezbollah, is currently serving a 23-year prison term for illegally accepting hundreds of thousands of dollars from top Libyan officials, plotting to murder Saudi Crown Prince Abdullah (on behalf of Libyan President Muammar Qadhafi), and violating tax and immigration laws (“Council for Islamist Interests” FrontPageMagazine.com, Aug. 5, 2004). In response to the exposure of the Alamoudi case by Stuart Wagner and Elon Granader, two research analysts associated with the Investigative Project (a Washington based counter-terrorism institute), CNI claimed ignorance of Alamoudi’s activities, although his support for Hamas and Hezbollah was well known as early as 2000. After his arrest, he remained on the CNI Board for another ten months, finally being removed when he was convicted on July 30, 2004.

A 1999 CNIF press release showed a delegation that included CNI President Eugene Bird meeting with leaders of Hamas and Hezbollah. Also in 1999, CNI co-founder Richard Curtiss was the featured speaker at a Jerusalem Festival organized by the Islamic Association for Palestine, which has distributed Hamas communiqués including a charter calling for jihad against Jews.
Dr. Laura Drake is another extremist with ties to CNI. In 1993 and 1994, Drake served as the organization’s Director of Research. By 1998, she was Director of the United Association for Studies and Research, an organization that, according to FBI Special Agent Robert Wright, “served as the command headquarters for the United States-based Hamas enterprise.” George Mason University professor Peter Leitner, President of the Higgins Counterterrorism Research Center, similarly referred to the UASR as “a front organization for a terrorist group” and described it as “part of the international terrorist network.” In a speech to the Al-Hewar Center in 2000, at a time when Israeli Prime Minister Ehud Barak was offering far-reaching concessions to resolve Israel’s conflict with the Palestinians, Drake urged Arabs to refuse to normalize relations with Israel.

CNI members espouse fringe conspiracy theories and associate with anti-Semitic extremists. CNI Foundation Chairman Paul McCloskey refered to Israel as “an ugly little nation” and “a potential enemy of the United States.” McCloskey stirred up controversy in 2000 when he was a featured speaker at a conference of the Institute for Historical Review, a Holocaust denial group, appearing with several notorious Holocaust deniers, like Arthur Butz, Robert Faurisson, David Irving and Ernst ZÃ¼ndel. And CNI Chairman Paul Findley has accused the Mossad (Israeli intelligence) of playing a role in the JFK assassination and attempting to kill President George Bush.

CNI is an outgrowth of the American Educational Trust (AET) , which publishes The Washington Report on Middle East Affairs, a virulently anti-Israel publication with strong anti-Jewish undertones. The Washington Report has crudely branded Israel’s defenders, “fifth columnists,” “Israel-firsters,” “viruses,” “bacteria,” “cancer,” and an “alien intrusion” operating “against the interests of the United States.” The White House, the State Department, Congress, and the media have been termed “Israeli occupied territory.”
Former CNI Executi ve Director David Bowen has joined Washington Report publisher Andrew Killgore and editor Richard Curtiss to speak at meetings of the now-defunct Liberty Lobby, which the Anti-Defamation League called “the most influential and active anti-Semitic propaganda organization in the United States.”

AET’s membership includes a number of former Foreign Service “Arabists.” Not surprisingly, while the heads of two modern democratic governments, the U.S. and Israel, are denigrated, the antediluvian Saudi monarch is portrayed in glowing terms. The April 22 ad in the Times presents the recent Saudi ultimatum to Israel concerning normalizing relations as “King Abdullah’s extraordinary effort to reopen the moribund Arab-Israeli peace process, so crudely ignored by Israeli Prime Minister Olmert and President Bush.”

The Council for the National Interest essentially functions as the American arm of an Arab propaganda campaign to weaken bonds between the US and Israel by promoting the Arab narrative of the Israeli-Palestinian conflict. This campaign inverts reality, casting Israel, a liberal democracy, as a racist, oppressive regime while ignoring the dictatorial nature of many of the Arab regimes CNI favors.