Underneath it, the caption read:

Ahlam Tamimi in a scene from the HBO documentary ‘Hot House.’ Ms. Tamimi is among about 10,000 Palestinians being held in Israeli jails.

What the Times failed to inform readers was that this young, cheerful-looking woman was the unrepentant female terrorist who assisted in the suicide bombing of a pizza shop which killed 16 people, mostly teenagers and children. She smuggled explosives in a guitar case into Jerusalem and helped provide cover for a fellow terrorist who used the bomb to murder those who stopped by the Sbarro Pizzeria for lunch, including 15 year-old Malki Roth.

Upon seeing the smiling photo of one of his daughter’s murderers in the New York Times, Arnold Roth, Malki’s father, wrote to the Solomonia blog, pointing out that “neither the New York Times nor HBO are likely to give even a moment’s attention to the victims of the barbarians who destroyed the Sbarro restaurant in Jerusalem and the lives of so many victims” and including a link to pictures of Malki. Click here for the June 28 posting on the Solomonia blog

Below is a photo Times readers won’t see. It is of Malki (L) and her close friend Michal Raziel (R) –both of whom became victims of Tamimi and her cohorts at the Sbarro Pizzeria. 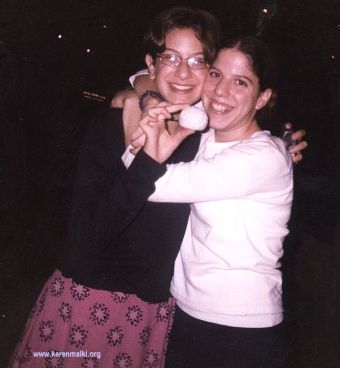 In the article, NY Times film reviewer, Neil Genzlinger, offered a smug dose of false moral equivalence, portraying Israel’s self-defensive counter-terror measures as no better than Palestinian terrorism against civilians, and trivializing it all as a “cat and mouse… game”:

…by the end of ‘Hot House’ you may feel more than a little annoyance at the two sides in this endless conflict. These enemies know each other absurdly well. They learn from each other, and talk openly about doing so. Yet they can’t seem to break the cycle: a cat and mouse addicted to their own game.

The “cycle” and “game” Genzlinger facetiously refers to are the bloody Palestinian terror attacks against civilians followed by Israel’s attempt to defend its people by destroying the Palestinian terrorist infrastructure, including arresting/attacking terror leaders and their armed followers.

Take, for example, the Times‘ coverage of Wafa Idris, the first Palestinian female suicide bomber. Her attack was carried out in the center of Jerusalem on January 27, 2002, killing 81-year-old Pinhas Tokatli, a fifth-generation Jerusalemite who was shopping nearby for paints for his art class. He left a wife, a sister, four children and 13 grandchildren. Two dozen others were wounded in the attack.

A New York Times profile of the Palestinian bomber (January 31: James Bennet, “Arab Woman’s Path to Unlikely ‘Martyrdom”), accompanied by several photographs, asserted that she “raised doves and adored children,” pointing out that preceding the attack, she “brought fruit juice to a cherished niece.” The article attempted to explain Idris’ violent role as “a sign of the growing desperation of Palestinians,” detailing the hardships she allegedly endured. A front page photo depicted the bomber’s mother holding up a framed graduation picture of Idris. A sentence in the article further described the photo:

“Ms. Idris looks confident and composed, her chestnut hair curling past her shoulders, a rose and her certificate in her right hand.”

A second photo depicted the terrorist’s brother with a poster honoring her as the first Palestinian woman to carry out a suicide attack Both photograph captions referred to the bomber and her relatives by name. A third of the scene of the bombing was captioned “At the attack scene Sunday” and presented the family’s justification for the attack, “Her family said the bomber, Wafa Idris, a medic, was traumatized by her work helping wounded Palestinians.”

There were no articles about, nor photographs in the Times of Pinchas Tokatli. In fact he was never even named, just referred to anonymously as “an Israeli man.”

Similarly, following an April 2002 suicide bombing at a Jerusalem supermarket, the Times focused much more on the Palestinian attacker than the Israeli victims. The newspaper published a single human interest story about the Israeli teenaged victim of the terrorist attack, one week later, paired with a profile of her killer (April 5, 2002: Joel Greenberg, “2 Girls, Divided by War, Joined in Carnage”).

Not only was this first and only report providing any details about the victim, Rachel Levy, blurred into an equating of young lives lost on both sides of the conflict, it was the third one providing details and photographs of the terrorist.

The first story about the attack focused primarily on the Palestinian suicide bomber rather than on her victims (March 30: Serge Schmemann, “Suicide Bomber, 18, Kills Two Israelis and Herself”). This was followed the next day by an article about the suicide bomber’s family (March 31: Joel Greenberg, “Daughter Concealed Angry Soul of a Martyr”). Together, the two articles presented information about the terrorist’s name, sex, age, occupation, motivations, brothers, father, as well as a large full length photo of her and another of her mourning father. The only information provided about the victims of this terrorist attack was that “a man and woman were killed,” and that at least 30 were wounded. No names, no descriptions, no occupations, no ages, no mourning families and no photographs. While the female victim of the bombing was named one week later, the male victim of the bombing was apparently deemed un-newsworthy, his name never mentioned. He was Haim Smadar, temporarily working as a security guard at the supermarket during the Passover holidays.

And how did the New York Times describe March 2002 — the deadliest month for Israelis by Palestinians — in its 2002 Year Review?   The summary went as follows:

March was one of the bloodiest months in the Middle East since the war in 1967. Israeli tanks pushed into Palestinian refugee camps for the first time, then bombarded Gaza from the land, sea and air. Suicide bombers attacked a conservative Jewish neighborhood, then a popular cafe. … A suicide bombing in a hotel during Passover dinner killed more than a dozen people.

In fact, between March 1 and March 31st, 32 attacks were carried out by Palestinian terrorists on a near daily basis, killing 132 Israelis and wounding 580 more. Israel launched counter-terrorism operations AFTER the first several bloody attacks. The Times, however, reversed and disconnected these events, blurring cause and effect, perpetrator and victim and morally equating the two.

Genzlinger’s film review and the photo displayed prominently above it is just a continuation of the New York Times pattern of highlighting Palestinian terrorists while ignoring their victims and equating the two.